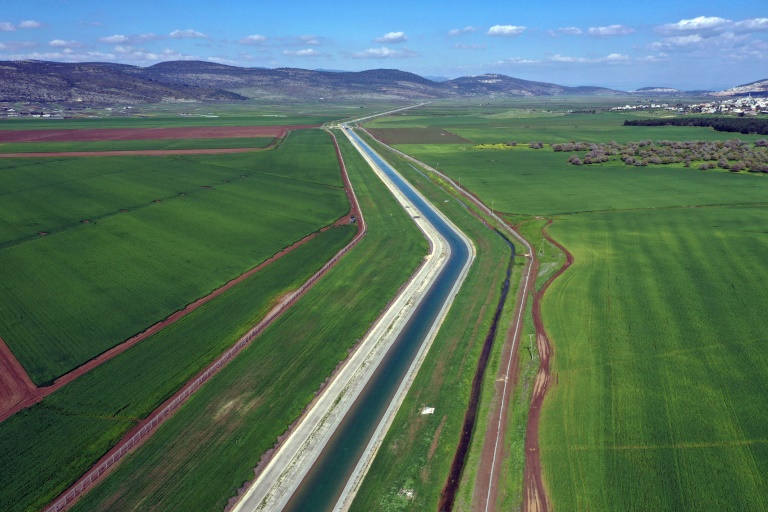 Israel, a leader in making seawater drinkable, plans to pump excess output from its desalination plants into the Sea of Galilee, depleted by overuse and threatened by climate change.

Irregular rainfall, rising temperatures and intensive pumping have overtaxed the world’s lowest freshwater lake, which for decades has served as the Jewish state’s main sweetwater reservoir.

Israel now plans to tackle the challenge by reversing the water flow through its vast network of pumps, pipes and tunnels dating to the 1960s, the National Water Carrier.

Authorities hail the project as a showcase for Israel’s cutting-edge desalination and water management technology, which can also help deepen ties with arid Arab states.

Critics charge that Israel has long short-changed Palestinians out of their fair share of water, leaving much of the occupied West Bank and the Gaza Strip facing severe water stress.

And environmentalists note that the more Israel relies on fossil fuels to power its desalination plants, the more its carbon emissions will worsen climate change.

For now however, experts say, urgent action is needed to brace the country for global warming coupled with rapid population growth.

Israel’s average temperature has risen by two degrees Celsius over the past two decades, said Noam Halfon, a researcher at the Israel Meteorological Service.

A wet winter has just topped up the lake, but its level dipped substantially in the drought years of 2014-2018, a potential harbinger of worse to come.

“Some models predict we will have less precipitation overall, a reduction of 10 or 15 percent in the second half of the 21st century,” Halfon said.

Israel’s rapidly growing population adds to the need for the new water infrastructure project, he said.

“Every 30 years we double the population. Without this project, it would be an awful situation.”

Ziv Cohen, an engineer at Israeli water company Mekorot, was overlooking a work site in northern Israel where a crane was lowering water pipe segments into trenches.

The verdant hillsides were scattered with blooming spring flowers, but Cohen said appearances are deceiving.

“In recent years, we have all felt a decrease in rainfall” in the lake’s catchment area, he told AFP.

Cohen said the one-billion-shekel (over $300-million) project will, by the end of the year, reverse the flow of the system which previously delivered lake water to areas across the country.

“The minute water flows through the pipeline, bringing excess water from desalination plants in the centre, we can raise the level of the Sea of Galilee, and it will become an operational reservoir,” he said.

About an hour’s drive away on the Mediterranean coast, David Muhlgay poured himself a glass of water made by the Hadera Desalination Plant, one of five in Israel.

“Israel has gone from water as a scarce product to an abundance of water in 15 years, which is phenomenal,” said Muhlgay, CEO of OMIS Water Ltd.

“We are ready to go” and connect to the new system, he said.

The seaside plant sits beside the coal and gas-fired plant that powers it, underscoring the contradictions in adapting to the climate crisis through energy-intensive desalination.

“Electricity needs to be sourced,” Muhlgay said, arguing that for now only fossil fuels can do the job.

“It cannot only rely, for the moment, on renewable sources.”

Israel’s desalination expertise has opened new diplomatic avenues in the water-scarce Middle East, where it has established ties with the United Arab Emirates, Bahrain and Morocco.

Israel, Jordan and the UAE last year agreed in principle on a plan for Jordan to exchange solar power for Israeli water, which authorities told AFP would come from the Galilee.

Muhlgay said his plant had hosted visitors from Morocco, and the plant operator’s parent company IDE had sent a vice president to visit the UAE.

“There’s lots of interest in the Israeli technology,” Muhlgay said.

“If everybody is short of water, bringing water can solve a few problems.”

The situation for Palestinians has however scarcely budged despite the new technologies, said Ayman Rabi, executive director of the Palestinian Hydrology Group.

Under the terms of a 1990s peace agreement, Israel sells water back to Palestinians, but allocations have not kept pace with population growth.

To cope, Rabi said, Palestinians have begun planting crops that require less water, and made a concerted effort to catch rainwater.

“Of course (Israelis) are marketing themselves as water exporters,” he told AFP. “I don’t think this will impact the Palestinians.”

In this article:Environment, Israel, Palestinians, Water