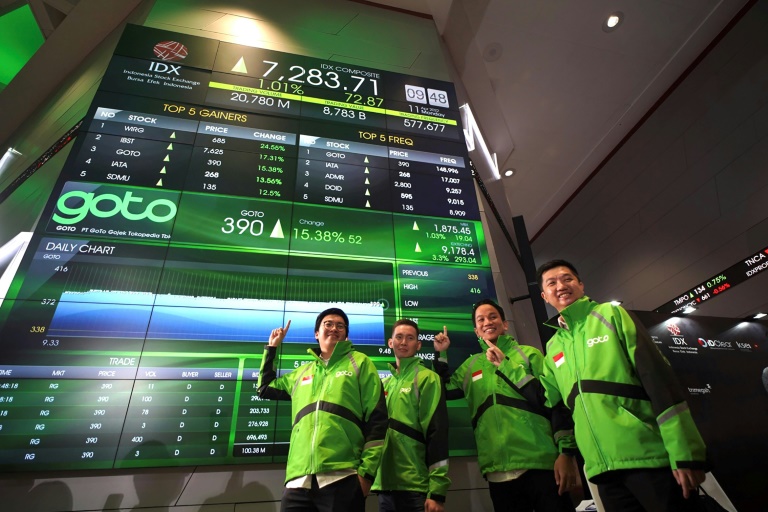 GoTo, the largest digital ecosystem in the archipelago nation of 270 million people, was formed by the merger of ride-hailing company Gojek and e-commerce platform Tokopedia in May 2021.

Clad in the signature black-and-green jacket of a Gojek driver, GoTo CEO Andre Soelistyo pressed the 9 am opening bell at the Jakarta stock exchange.

“Despite global market volatility, investor interest has been strong, reflecting the rapidly growing demand in Southeast Asia for our on-demand, e-commerce and financial technology services, as well as confidence in GoTo’s position as the largest digital ecosystem in Indonesia,” he said in a press release.

His company’s shares jumped by up to 23 percent in the first exchanges and fluctuated around 15 percent at 388 rupiah during the trading session.

The company raised about $1.1 billion in its IPO that concluded last week, priced at 338 rupiah per share, representing a market value of about $28 billion, it announced Monday.

It has sold shares for $954.7 million (13.7 trillion rupiah) plus $146.3 million from treasury shares for the purpose of over-allotment.

Based on the total funds raised, GoTo’s IPO is the third-largest in Asia and fifth-largest in the world this year, it said.

The company announced last week it would distribute shares worth about $21.6 million to hundreds of thousands of its drivers.

One of the lucky drivers was Ryan Supriandi, who has been a Gojek driver for nearly seven years.

Supriandi was pleasantly surprised to receive a mobile notification saying the company had granted him 4,000 shares, worth about $90.

“I was happy and confused at the same time — what am I going to do with it? Many drivers don’t understand shares or markets,” the 34-year-old told AFP.

“I hope GoTo IPO will motivate Indonesian youth to give new energy for the leap of our country’s economic development,” Widodo said.

But Reza Priyambada, a stock market analyst from CSA Research Institute, said that while it was still too early to judge how GoTo would perform, investors should proceed cautiously.

“While they do claim to be the biggest marketplace in Indonesia, they are still suffering losses at the moment,” Priyambada said.

“Right now investors are still under a euphoria, but we don’t know if they really understand how GoTo works, what are their prospects and how the management is run.”

GoTo has not published profits yet. The exchange reported that from January to July 2021 the company posted more than $556 million in net losses.

Last year, another Indonesian unicorn, Bukalapak, launched the biggest initial offering in the history of the country’s stock market, raising more than $1.5 billion.

However, shares in the online marketplace have since dropped by around 60 percent, instilling doubts in the Southeast Asian tech sector.

A successful IPO for GoTo could open the door to a string of listings in the country as several tech firms — including Traveloka, LinkAja, J&amp;T Express, Tiket and Blibli — are also set to make their market debut, according to local media.

GoTo, whose main competitors in the region are SEA and Grab, has said previously that it was also planning a US listing.

In November it said it had raised $1.3 billion from various investors including Google, Singapore’s Temasek and China’s Tencent.