Windows users instinctively click the red “X” button in the top-right of windows to close applications. It’s simple and usually expresses a negative behaviour. People click “X” and expect the app to close itself without taking any action.
Microsoft has been found to be abusing this and changing the behaviour of the close button to convince users to install Windows 10. In a recent update to its “Get Windows 10” app for Windows 7 and 8.1 PCs, the company changed the behaviour of the button so it now accepts the upgrade for you and automatically schedules an installation time.
The company has been criticized for using what many perceive as a “dirty trick” commonly found in malware. Because the Get Windows 10 app can appear at random moments on its own, people are likely to be used to routinely dismissing it with the close button. Doing that today will schedule an upgrade though, fooling you into accepting something after using a universal decline button. 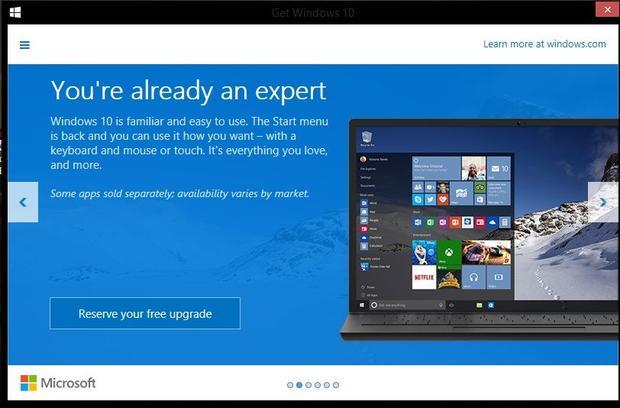 After facing the wrath of angry users who have faced months of incidents like this, Microsoft turned around today and announced it will be removing the behaviour. It told the BBC it had made the change based on user “criticism” and customer feedback.
Even now, the company hasn’t added a way for you to easily decline the upgrade though. Clicking the close button will display an additional pop-up message letting you either cancel the installation or reschedule it for a different time. Microsoft will keep you in the app, exposed to Windows 10 publicity, for as long as it possibly can, even when you’ve just expressed an intention to quit it.
This is far from the first time Microsoft has come under fire for its underhand tactics in promoting Windows 10 to users of older operating systems. Many people are happy with their current version of Windows and have no desire to upgrade. Microsoft has consistently failed to respect user choices however, instead marketing Windows 10 using increasingly aggressive pop-ups and notifications.
In a piece for The Guardian this week, columnist Michele Hanson explained how Microsoft “ruined my day, and possibly my life” when her Windows 7 computer suddenly upgraded itself to Windows 10.
“They’ve given me a fright, ruined my day, and possibly my life, because I think I’ve lost the bulk of my documents,” Hanson wrote in an article that other users are likely to relate to. Microsoft claims it never installs Windows 10 without users’ permission but it has previously admitted to software glitches that do exactly that.
Windows 7 and 8.1 users should receive an update today that will once again modify the Get Windows 10 app, this time adding an additional pop-up message for when you try to close it. Incidents like this are likely to continue until the Windows 10 free upgrade offer ends on July 29, at which point the Get Windows 10 app will finally be withdrawn.