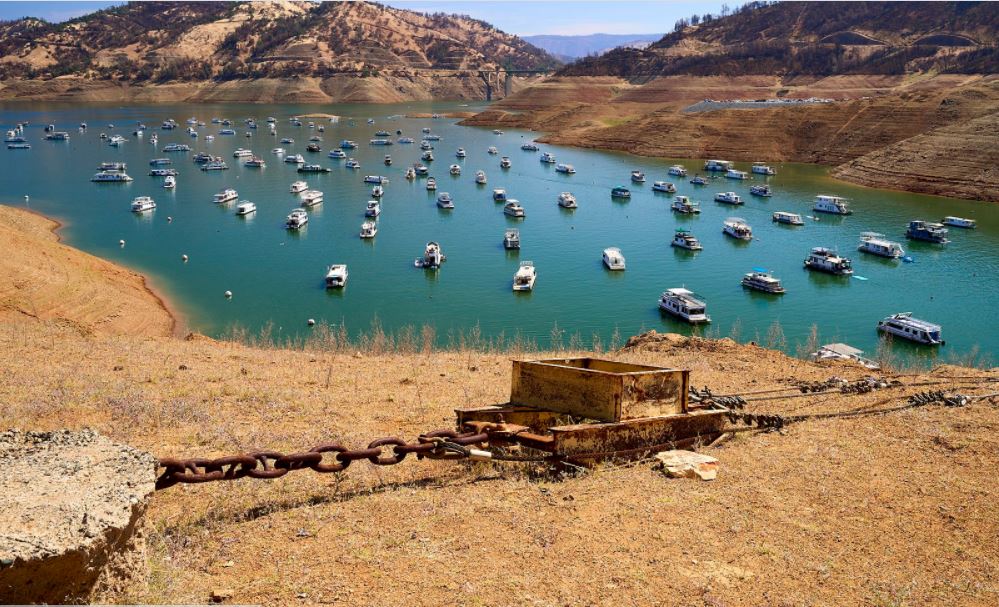 California’s second-largest reservoir, Lake Oroville, is considered a keystone facility within the state’s water project. The reservoir not only stores water but is essential to flood control, recreation, freshwater releases that assist in controlling salinity intrusion in the Sacramento-San Joaquin Delta and protecting fish and wildlife.

Oroville Lake, in Butte County, California is fed primarily by the Feather River, along with various other streams, giving it a catchment area of 3,950 square miles (10,200 square kilometers).

With 167 miles of shoreline, the reservoir has a capacity of 3,537,577 acre-feet (4,363,530,477.96 cubic meters). But the mighty lake — a linchpin in a system of aqueducts and reservoirs in the arid U.S. West that makes California possible is shrinking with surprising speed due to the severe drought gripping the western part of the United States.

John Yarbrough is the deputy director of the state water project. He says the drought is so intense this year that the state is forecasting the possibility it will be forced to shut down the Lake Oroville hydroelectric power plant.

At full capacity, the Edward Hyatt Power Plant can generate enough power to serve 800,000 homes. It’s running at 20% capacity now and could be shut down by the end of August.

California’s 2021 drought is a real doozie

This year’s drought has been much hotter and drier than previous ones, and every one of the state’s 1,500 reservoirs has suffered, ending up at 50 percent or lower capacity. In April this year, Lake Oroville was down to 42 percent capacity.

Over Memorial Day weekend, dozens of houseboats sat on cinderblocks at Lake Oroville because there wasn’t enough water to hold them. Blackened trees lined the reservoir’s steep, parched banks.

The same could be said of nearly Folsom Lake and Lake Shasta, where campers occupied the dusty banks leading down to the slowly evaporating water. But the real problem is more than taking care of the needs of people seeking recreation.

The state also needs the fresh water from the reservoirs to keep out the salt water that harms freshwater fish, and the salmon need the cool waters at the bottom of deep reservoirs to spawn.

More importantly, farmers need water, lots of it for their crops, and everyone needs the water to run hydroelectric power plants that supply much of the state’s energy.

If Lake Oroville falls below 640 feet (195 meters) – which could very well happen by August – the power plant on Lake Oroville would be shut down for just the second time since it began generating power in 1968.

The strain on the electric grid during the hottest part of the summer would be horrendous. Added to that, there is also an unspoken fear – Butte County suffered the deadliest U.S. wildfire in a century in 2018 when 85 people died. Last year, another 16 people died in a wildfire.