It has been almost 151 years to the day when the Confederate submarine H.L. Hunley sank off the coast of South Carolina after attacking and sinking the warship USS Housatonic on Union blockade duty in Charleston’s outer harbor on February 17, 1864. The Confederate submarine was reportedly rediscovered in 1970 by Underwater Archaeologist E. Lee Spence.

Underwater archaeological investigation and additional excavation of the site in 2000 ended with the raising of the submarine on August 8, 2000. The Hunley was taken to a conservation laboratory in North Charleston where it was placed in a 90,000 gallon tank of fresh water to purge the salt. Thus began the tedious task of removing the 1/4- to 3/4-inch (0.6- to 1.9-centimeter) encrustation of rust encrusted with sand and seashell particles. 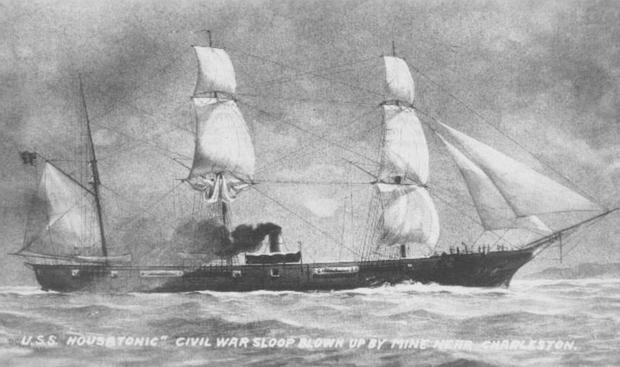 USS Housatonic.
US GOV-MILITARY.
Finally, last May, the Hunley was ready for a bath in a solution of hydrogen peroxide to loosen the encrustation. It took several months, and in August, scientists were ready with air-powered chisels and dental tools to remove the rust. To date almost 75 percent of the hull has been revealed, with the few remaining rusted areas being labeled “forensic hotspots.” 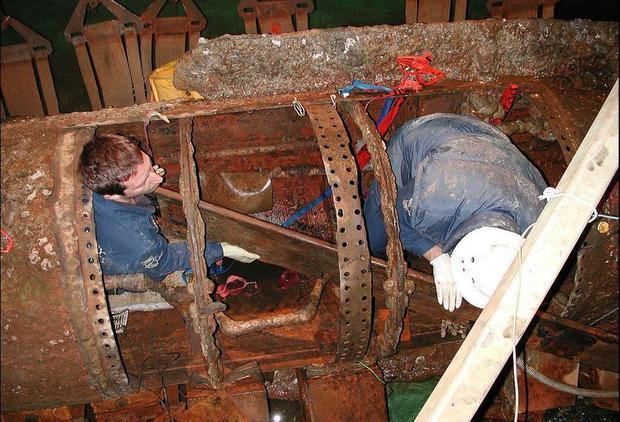 Civil War Confederate submarine Hunley conservators Philippe de Vivies, left, and Paul Mardikian remove the first section of the crew’s bench at the Warren Lash Conservation Lab in the former Charleston Navy Shipyard, S.C.
U.S. Naval Historical Center
The Clemson University group of conservators says they have already made some interesting discoveries, such as the letters “CN” stamped on the hull. Experts investigating the stamped letters think they may be the initials of the foundry in Mobile, Alabama where she was built in August of 1863. “It’s like unwrapping a Christmas gift after 15 years. We have been wanting to do this for many years now,” said Paul Mardikian, the senior conservator of the project. 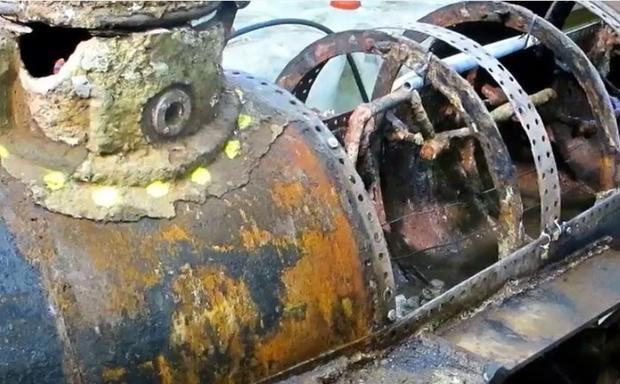 A century and a half after it sank and a decade and a half after it was raised, scientists are finally getting a look at the hull of the Confederate submarine H.L. Hunley, the first sub in history to sink an enemy warship.
YouTube
The mystery of the gold coin and Union I.D. tag
Scientists removed around 10 tons of sediment from the hull of the submarine, including bones, skulls and even some brain matter of the eight-man crew. They found fabric and personal belongings, including a damaged $20 gold piece, minted in 1860, with the inscription “Shiloh April 6, 1862 My life Preserver G. E. D.” The gold piece was reported to belong to Lieutenant George E. Dixon, the commander of the submarine. Dixon had the coin in his trousers pocket at the battle of Shiloh when he was wounded in the thigh on April 6, 1862. The bullet hit the coin in his pocket, saving his leg and just maybe, his life. He had the coin engraved and carried it with him. 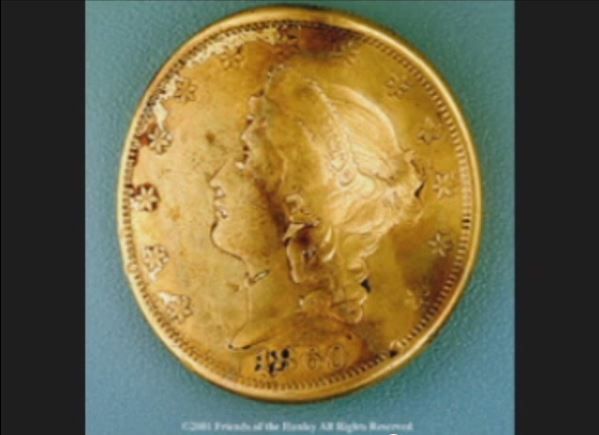 In the Warren Lasch Conservation Center – home of the H.L. Hunley, you will find the $20 gold coin.
YouTube
Another interesting discovery was the finding of a Union soldier’s I.D. tag with the name Ezra Chamberlain, Private, 7th Connecticut Infantry, Union Forces. The tag was found on the back portion of a skull of one of the crewmen. After serious forensic investigations were completed, it was revealed that the crewman’s name was identified as being Joseph Ridgaway. Ezra Chamberlain was killed in battle on Morris Island, July 11, 1863, and his I.D. tag was picked up as a battlefield souvenir by Ridgeway while on sentry duty.

Mardikian says the hull is like an “enigma machine,” ready to reveal its answers. “I would have to lie to you if I said we had not, but it’s too early to talk about it yet,” he said. He says all the clues are being studied closely, and they are working to find the answer to what did happen to the 40-foot submarine that fateful night.

Speculation on what happened to the crew of the Hunley
There really is no definite evidence suggesting how the eight-man crew died on the Hunley. There has been speculation as to how they died, though. One suggestion is that the sub was too close to the USS Housatonic when the torpedo she was rammed with went off. In January 2013, the archaeologists discovered the remains of a copper sleeve at the end of the Hunley’s spar, suggesting the Hunley may have been no more than 20-feet from the Union blockade ship when the torpedo detonated.

Other suggestions for the demise of the crew include a rupture of the viewing port caused by small-arms fire or a failure of the torpedo to detonate. But the most plausible explanation is the discovery in 2008 that the crew had failed to set the pump to remove water from the crew’s compartment, giving the crew the impression she was not being flooded. One of the scientists said it then all comes down to a lack of oxygen. The crew members fell into a stupor and never woke up. 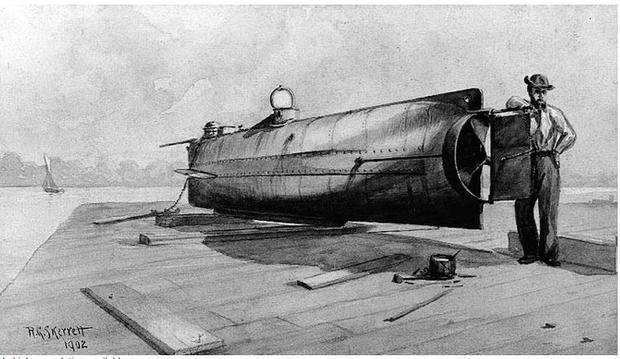 Inboard profile and plan drawings of the H.L. Hunley, after sketches by W.A. Alexander, who directed her construction.
U.S. Naval Historical Center Photograph.
The H.L. Hunley was cutting-edge technology in 1864
It may come as a surprise, but the mindset of those planning and executing naval warfare was simple: Big ships sink small ships. Michael Drews, the director of Clemson’s Warren Lasch Conservation Center says the submarine was much more sophisticated than previously thought. “It has the ballast tanks fore and aft, the dive planes were counterbalanced, the propeller was shrouded,” Drews said. “It’s just got all of the elements that the modern submarines have just updated.” Drews also pointed out there were previous submarines, but the Hunley was designed for the open ocean and was built specifically for warfare. While “Big ships sink small ships, the Hunley turned that upside down,” said Drews.
In this article:Civil War, confederate submarine, enemy warship, H L Hunley, Union Blockade, what sank the Hunley