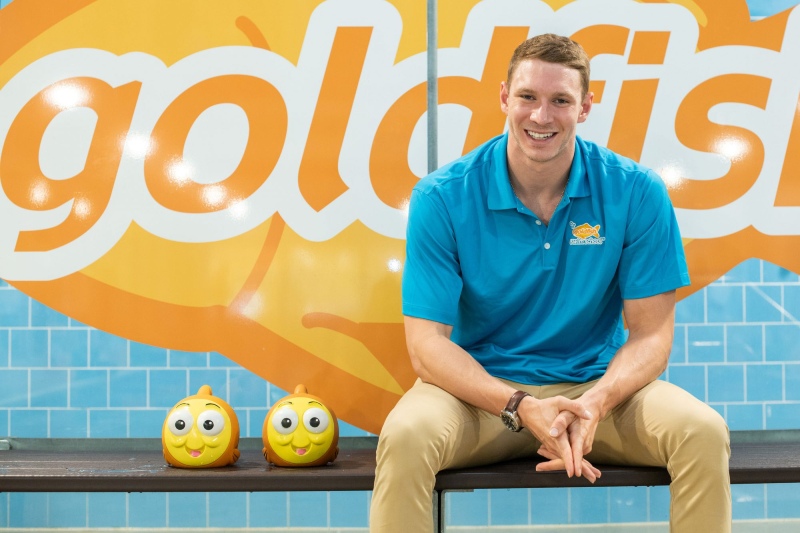 The backstroke king opened up about his acclaimed career as a professional swimmer and the Goldfish Swim School, which offers swim lessons for children of all ages and experience levels. “Goldfish is a learn-to-swim academy and school,” he said. “The kids are anywhere from six months old to age 12. They are trying to introduce the sport of swimming to as many people as they can.”

In his Olympic debut in Rio back in 2016, Murphy won three golds medals, sweeping the backstroke events and helping the U.S. win gold in the 4x100m medley relay, where his backstroke lead-off set a world record. In 2017, he turned pro, earned the PAC 12 Scholar-Athlete of the Year award, and completed his B.S. in Business Administration from the prestigious Haas School of Business at UC Berkeley.

As one of the most dominant swimmers in the world, the 23-year-old swept the backstroke events at the 2018 Pan Pacific Swimming Championships, won six medals (three gold and three silver) at the 2018 Swimming World Championships in Hangzhou, China, and was named the 2018 Male Athlete of the Year by USA Swimming at its annual Golden Goggle Awards. In 2021, he shined in Tokyo winning gold in the 4×100 meter medley relay, silver in the 200-meter backstroke and bronze in the 100-meter backstroke.

A native of Ponte Vedra Beach (Jacksonville), Fla., Murphy is passionate about giving every young child the opportunity to learn how to swim and being a role model for young swimmers. He currently trains in Berkeley, CA with the goal of making his third-straight Olympic appearance in Paris.

Murphy also spoke to Cuoco about the Goldfish Swim School, where he serves as an ambassador.

“Live On Air With Steven Cuoco” is a weekday syndicated satellite radio program produced and hosted by Steven Cuoco, who is a veteran expert in public relations, reality TV, media, broadcasting, and podcasting. The radio program is heard in 200 countries.

Cuoco’s entire informed conversation with Olympic swimmer Ryan Murphy may be heard below.