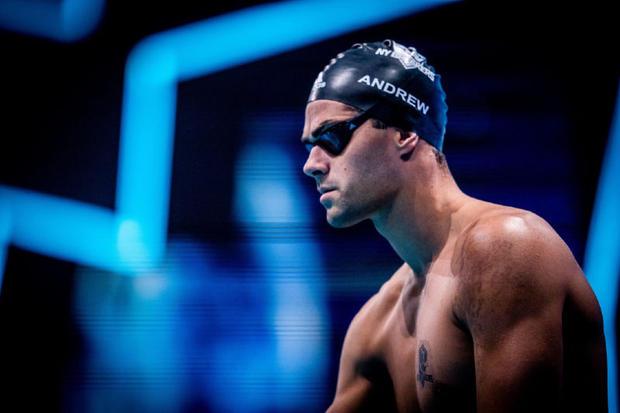 He won the men’s 200 meter IM race with a time of 1:58:05, which was the fastest time in the world thus far in 2021. “It feels good,” he admitted. “I honestly didn’t know that was going to be the time. When they announced it, I thought that was pretty cool. I feel that it will be short-lived, but it’s always nice to swim the fastest time in the world.”

“Now, we will take that motivation and move on to the next week,” he said.

Andrew shared that his three focus events for the U.S. Olympic Trials are the 100 meter breaststroke, the 50 meter freestyle, and the 200 meter individual medley (IM). “I also love the 50 free and the 100 breast, they are my two prime,” he said. “The 200 IM is a big focus just because I can swim all four strokes and I feel that for years I neglected to pursue that event because it’s such a challenge in terms of endurance.”

“My dad would say the 200 IM is my priority, and my mom would say the same because they both love that race,” Andrew said. “It’s a beautiful race once swum right. Going into the Olympic Trials that would be my focus.”

Andrew opened up about the greatest lesson that the quarantine has taught him. “I feel that my community has gotten tighter through the quarantine and I feel that my relationships have gotten stronger because I’ve had time away from the pool. That was a huge lesson for me,” he said.

“Swimming fast, breaking records, and making teams is cool and all, but it doesn’t last. What lasts are the relationships and I realize how important it is to have that especially in a time like this,” he added.

He revealed that his fans and followers can expect a new vlog from him. “I am going to start editing my new vlog on my flight home tomorrow so it should be out Monday or Tuesday,” he said.