The survey was conducted from November 8-15, 2015 covering a sample of 1,200 respondents nationwide. The survey firm which was commissioned by ABS-CBN News claimed the survey has a margin of error of +/-3 percent.

Voters will elect 12 senators in the upcoming 2016 elections and the 12 senatorial candidates who make up the Top 12 list will be proclaimed winners to fill the 24-member Philippine senate.

Respondents were asked: “Sa mga taong nasa listahang ito, sinu-sino ang inyong iboboto bilang SENADOR NG PILIPINAS kung ang eleksyon ng 2016 ay gaganapin ngayon at sila ay mga kandidato? Pwedeng kayong pumili ng hanggang 12 pangalan.” (From this list, who will you vote as senators of the Philippines if the 2016 elections were held today and they are the candidates?) Respondents were asked to choose 12 names from the list of official candidates.

As shown in the table below, Pacquiao ranked 7-10 along with fellow senatorial candidate Richard Gordon. followed by Teofisto Guingona who ranked 8-10. Incumbent Senator Vicente Sotto topped the Pulse Asia survey. 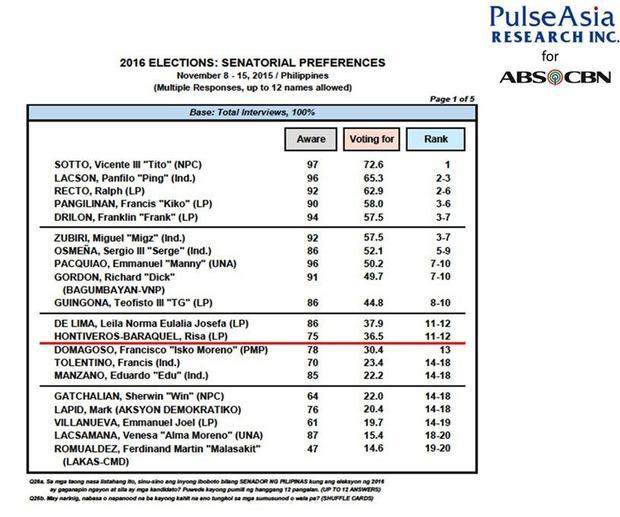 Pacquiao is set to stage his farewell fight on April 9 but he has yet to name his next opponent. He said he will quit boxing if he gets elected to the senate in the 2016 senatorial elections.

Among his possible opponents include Terence Crawford and Timothy Bradley. It is also possible he will face Floyd Mayweather in a rematch. Read more.

In this article:Elections, Manny Pacquiao, senator