In what soon became a very close game between rivals Pittsburgh and Baltimore, the game took a turn for the weird when the Steelers kicked off the ball after scoring a touchdown. The lead was now 13-7 for the Ravens.

Ravens receiver Jacoby Jones took the ball just inside the end zone, quickly sprinted free of defenders, and ran down the Steelers sideline and looked set for a kick return TD. 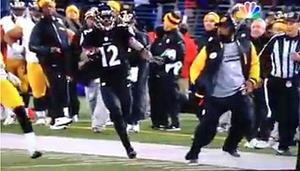 Ravens’ Jacoby Jones on his way down the sidelines for a TD, but notice Steelers coach Mike Tomlin step into his path on the field
YouTube screenshot

But soon Pittsburgh corner Cortez Allen chased him down and tackled him at the 27-yard line. How did that happen? An NBC replay showed Steelers coach Tomlin stepping quickly from out-of-bounds into the playing field, just a foot jerking out, a few yards ahead of the sprinting Jones.

The NBC broadcasters said it looked like Jones anticipated a trip and cut into the middle of the field, where Allen had a chance to tackle him and save a TD.

A video of the incident (embedded) does indeed show Tomlin stepping into the field and then moving his foot back. An NBC clip later shows Tomlin grinning after the play.

According to NFL rules, if an inactive player/coach steps into the field and disrupts a play, a TD can be awarded to the victimized team. The refs didn’t call any flag on Tomlin’s move.

The Ravens won the game in the end, edging out the Steelers 22-20.

Thursday’s night oddity resembles a similar tactic used by NBA coach Jason Kidd, when his Brooklyn Nets faced the L.A. Lakers earlier this week. Kidd managed to “spill” his soda on the court, leading to a delay that let him write up a possible game-saving play. In certain replays, you can see Kidd mouthing the words “Hit me” to a Nets player, and soon after a casual bump causes the drink to spill on the floor.