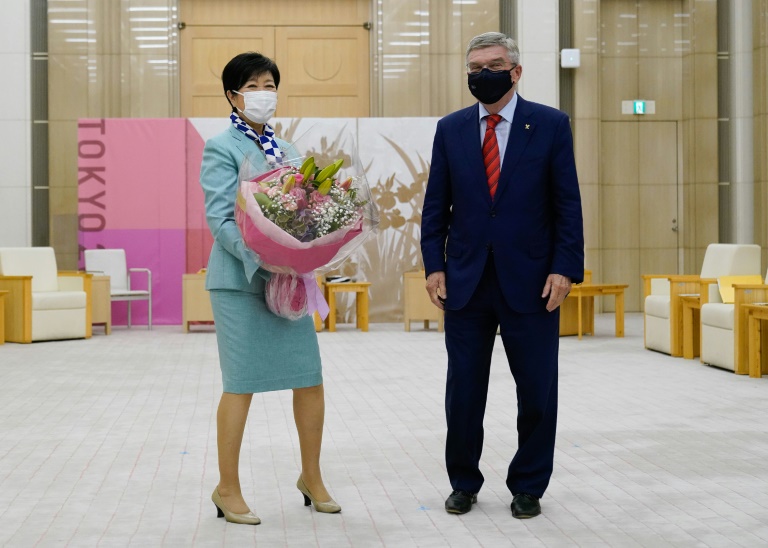 With just over a week until Tokyo 2020 opens for events mostly behind closed doors, organisers insist they can be held safely as long as athletes, officials and journalists adhere to strict anti-virus regulations.

But an athlete in Japan tested positive for the virus along with five Olympic workers, mostly contractors, as Tokyo recorded 1,308 new cases.

The news came as it emerged that eight staff at a Japanese hotel hosting Brazil’s Olympic judo team had tested positive, and a staff member from Russia’s rugby sevens team was hospitalised after a positive test.

Bach said a trip to the Olympic Village on Thursday morning had convinced him that anti-virus rules are “in place, and they are working, and they are enforced”.

“We could see and convince ourselves that all the delegations are following the rules and are supporting the rules, because they know it is in their own interest to be safe,” he said at a meeting with Tokyo governor Yuriko Koike.

“It’s in their interest and in solidarity with the people of Tokyo.”

The capital is currently under a virus state of emergency, less strict than a blanket lockdown, which limits alcohol sales and curbs restaurant opening hours. The measures will continue throughout the Olympics.

Tokyo 2020 said six people, including an athlete, several contractors and a Games staffer had tested positive for the virus on July 13 and 14.

They gave no further details on the identity of the six people.

The cases underscore the challenges ahead for organisers, although they note that only a handful of cases have been detected so far among more than 8,000 people who have entered Japan since July 1.

The cluster among staff at the hotel west of Tokyo where Brazil’s Olympic judo team are staying was found during virus screenings carried out before around 30 members of their delegation arrived on Saturday.

None of the infected staff came into contact with the athletes, local health and sports officials said.

A family member of one of the infected hotel workers also tested positive, Hamamatsu officials added.

Separately, a staff member with the Russian rugby sevens team was hospitalised after testing positive, an official in their host town Munakata in western Japan told AFP.

The team of 16 athletes and 10 staff members landed at a Tokyo airport on July 10, and has had no close contact with local officials or residents since then, he said.

The rest of the team is now quarantined in their accommodation, but if they test negative on Thursday, they will be able to resume training as early as Friday, the official added.

Kyodo news agency reported Thursday that organisers are considering having fewer than 1,000 VIPs and dignitaries at the opening ceremony in the 68,000-seat National Stadium.

Advertisement. Scroll to continue reading.
In this article:Olympic, Tokyo2021