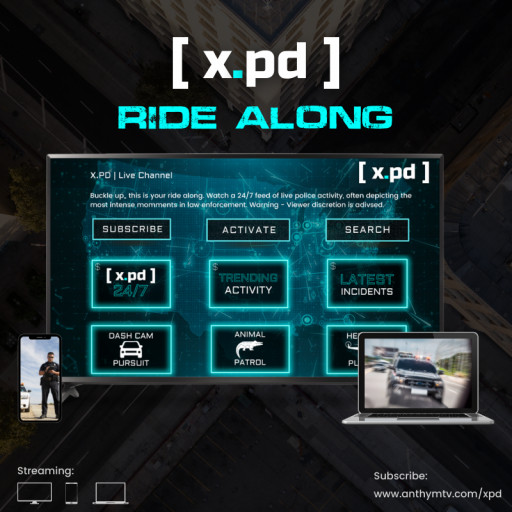 The latest season of X.PD, the hit series dedicated to first responder activity, premiered on AnthymTV earlier this month, along with its sister channel, the 911 Network, a 24/7 FAST channel covering true crime and real-life law enforcement activity. X.PD provides a complete and transparent look into the day-to-day lives of first responders on the job from first responders’ points of view, covering some of the most intense chases, standoffs, and rescues around the world.

X.PD’s immersive “Command Center” experience is nothing short of reality TV at its finest. The 24/7 network delivers viewers nonstop action along with commentary and context to keep viewers informed as the latest first responder incidents unfold right before their eyes. After the system scans to find the next incident, viewers get an introductory situation briefing before jumping straight into the action. With hundreds of professionally-produced short-form segments and new episodes released weekly, viewers never know what is coming next, creating an exciting, engaging, and binge-worthy viewing experience. As one viewer explained: “I love the nonstop action. I find myself getting sucked in for hours, and the weekly new content always keeps it feeling fresh.”

X.PD incidents include coverage of everything from high-speed chases involving ground and aerial pursuits, intense fire and water rescues against the clock, viral celebrity encounters with law enforcement, and everything in between. Some of last season’s wildest incidents include:

Unlimited, ad-free access to the series is available through X.PD All Access for a low-price subscription of $2.99 per month, after a free seven-day trial. The subscription includes access to the premium, ad-free 24/7 linear channel of nonstop X.PD as well as the full library of incidents on-demand. The 911 Network is available on a free, ad-supported basis across a variety of FAST streaming platforms on Roku, Amazon FireTV, AppleTV, Android TV, Samsung, and more.

Buckle Up, America. It’s time for a ride-along. Binge the best new true-crime series people can’t stop talking about. Check out the trailer here and watch episodes now on AnthymTV.

Streaming on a TV Near You: New Season of Hit First Responder Series X.PD & 911 Network