Over the years, games have evolved from single-player to multiplayer, then tabletop mega online games, mobile games, and now blockchain games, with different game modes driving the game in different ways. Multiplayer games create more of a network effect through social interaction and player community building aspects. Desktop and console bring high quality graphics and experiences to hardcore gamers, while mobile games push games to be more accessible to the masses.

Due to the digital nature of games and the intrinsic value of the items in them, games and blockchain naturally have a symbiotic relationship, exploiting the other’s unique selling points. Games create communities and content, energizing the highly technical back-end blockchain that gives players direct ownership of their assets. Items are uniquely tied to your address, meaning that if something happens to the original game development team, or if the community decides to create a derivative of the original game, such as a private server, players do not risk losing all of their items because the private server can only simply reproduce the player’s items from a non-homogenized token (NFT) in the player’s self-stored wallet.

Blockchain game allows for direct value transfer of digital assets and easier cash/liquidity conversion between assets and digital currencies without relying on a single central authority to facilitate the transaction process, plus it is the game that can make money. 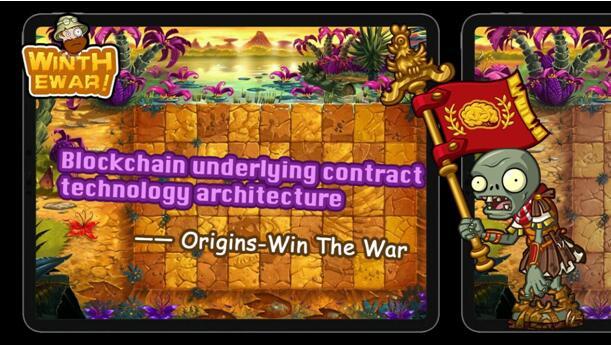 Origins-Win The War (Plants vs Zombies block game version) is a strategy puzzle game based on blockchain technology. Origins-Win The War’s mission is not just to create an eSports game, but a platform game that connects cryptocurrency owners with gamers and streamers. These three components will create a sustainable ecosystem where gaming, sharing, and in-game peer-to-peer exchanges are globally recognized.

In Origins-Win The War, hero NFTs are key assets in the game. Apocalyptic hero NFTs with high evolution levels can cultivate new guard NFTs through special cultivation slots. These guard NFTs can better help players deduct zombie groups and become an important helper for players to earn game income. Card NFT contains a variety of cards such as attribute cards and skill cards, each of which has its own unique effect. Players can obtain NFT through blind box extraction, market purchase, and gift giving.

A more sustainable way for players to earn money is not to continuously issue tokens through “process completion”, but by giving players enough skill to compete in PvP games and earn their victories through massive competition such as leaderboards or small scale tournament rounds. Origins-Win The War adopts a three-token parallel economic model of dual governance tokens + game tokens, which has the continuous value-added of bilateral growth and a hundred-fold growth space!

The future of Gamefi is definitely bright, and in conclusion, Origins-Win The War has high playability (player behavior is driven by gameplay), high player stickiness, and players are willing to spend time playing games. Ultimately, Origins-Win The War will Create fun and rewarding gaming experiences!