The owners of Land’s End and Kenai Landing in Alaska proudly announce Phase One of their waterfront residential development in Kenai, Alaska, known as Home Port. Two units are now under construction, and eight new “Front Street Loft” models are planned for 2022. 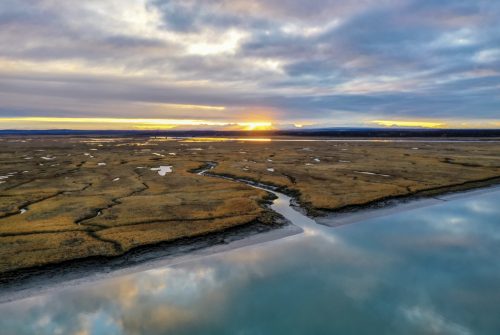 The owners of Land’s End and Kenai Landing proudly announce Phase One of their waterfront residential development in Kenai, Alaska, known as Home Port. Two units are now under construction, and eight new “Front Street Loft” models are planned for 2022. Located at the mouth of the Kenai River on the former Wards Cove Cannery site, Home Port is a 60-acre themed community offering a range of housing options within a residential condominium.

“We’re creating an Alaskan fishing town,” said Jon Faulkner, President of Kenai Landing, Inc., the development entity. “This location has thrived for centuries, first as a seasonal fish camp for Native Alaskans, then later as a massive cannery. The beauty of this location is stunning–unique in all of Alaska–and our Master Plan seeks to capture every element of a rich fishing tradition and the natural amenities that surround us”.

In 2021, Carroll Construction de-constructed what remained on the 100-year old cannery, clearing the old waterfront of the 30,000 sf processing plant and two-story “Beachgang Bunkhouse”.

“It’s not too late to acquire some of the reclaimed lumber and steel from these teardowns,” said Faulkner.”You can’t find wood like this anywhere. Most of it is 100-year old Douglas Fir, heartwood, from the northwest.”

Carroll is now the lead contractor for KLI, the same entity that owns Land’s End Resort in Homer and constructed the successful Land’s End Lodges there. After several attempts to re-develop the Kenai Landing waterfront, the owners feel confident they have assembled all the ingredients for success.

The City of Kenai agrees. In March, 2021, the Kenai Planning Commission voted unanimously to permit the development, recognizing the need for revitalization of lower Kenai River area. The initial permits allow roughly 60 units in what is called a “Planned Unit Development”, which allows the developer flexibility with land use and density in exchange for development controls.

“It’s a win-win,” said President Jon Faulkner. “With the PUD, we are able to justify a higher level of risk and investment in order to make this a truly attractive destination–a community of distinction and lasting value. Ideally, the City of Kenai wins by building its tax base and permanent residency.”

The Home Port website is now live and can be accessed at: