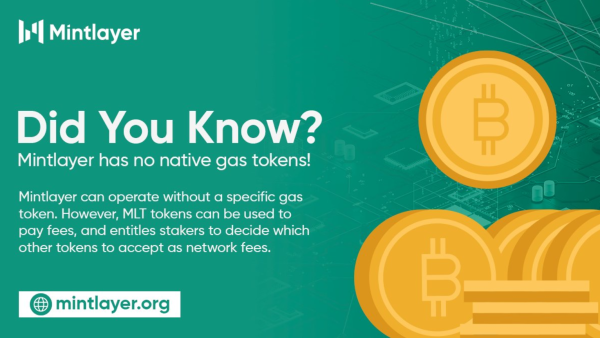 Mintlayer is a Bitcoin sidechain that focuses on asset tokenization, including stock tokens and stablecoins. It is a Byzantine fault-tolerant distributed and permissionless ledger protocol that utilizes the Bitcoin blockchain for randomization and time calculation in order to establish the active roles that network participants play over a specified time period.

Mintlayer was designed with an asynchronous network in mind, and its Proof-of-Stake validation is protected against long-range attacks thanks to the checkpoint system included in the protocol.

Mintlayer Token (MLT) is the token that can be used for staking and as a fee for any transaction, such as a gas token, or as a fee to produce new tokens on the Mintlayer blockchain, among other things. Mintlayer does not have a single gas token. This is because every token can be spent as a transaction fee.

A user who wants to be a part of the network consensus has to run a node and stake enough MLT tokens to meet a certain threshold (40,000 MLT). Each round, the algorithm selects the block signers who will participate in creating the next blocks. The more tokens you have, the more likely you will be chosen.

The hashes of the Bitcoin blocks are used as an additional randomization source to ensure that the algorithm’s outcome is impartial and that the order in which they make and validate blocks isn’t predictable in advance.

At a specific time in each round, every participant is requested to build and propagate a block for which all the transaction fees will be collected. The long-term security of the Mintlayer chain is guaranteed by a checkpoint system on the Bitcoin blockchain.

On Mintlayer, the frequency of block generation may vary within an interval. Each block proposer is given a time frame during which there is a good chance that other participants will sign the block. It is between 1 and 2 minutes.

In case the Mintlayer mempool is empty of transactions, the block proposers have incentives to wait up to 2 minutes before creating and broadcasting the block in hopes of collecting more fees from incoming transactions.

If the blockchain is congested, the block proposers might be willing to create blocks faster, depending on their considerations on how the fee market will react and whether the network will benefit from a higher block issuing frequency.

Learn more about Mintlayer through its official website to get to know more about the protocol, the future of Mintlayer, and its plans moving forward.