New York, NY – Oct 28th, 2021 – EDGE has officially announced the launch of their all-new non-slip traction spray for shoes that is expected to be a game-changer in the athletics space.

EDGE works by instantly softening rubber shoe soles, leading to a proven 25% improvement in grip and agility during athletic activity. In addition to enhancing agility, EDGE is well-positioned to minimize ankle sprains, the most commonly reported sports-related injury. A recent study estimates that high school and college teams alone get hit with $19.2 billion per year in costs due to player injuries. According to the U.S. Centers for Disease Control and Prevention, nearly half of these injuries are preventable – and that’s where EDGE comes in.

Since EDGE’s formula is designed to dry in seconds, athletes can just spray each sole the recommended three to five times right before practice or the big game. A single application of EDGE will last for an entire session but respraying during breaks will help to maximize grip intensity.

The formula is non-toxic, safe to use indoors, and will never damage the user’s shoes or the court. EDGE comes in a portable 2 oz. bottle that lasts for approximately 50 sessions of athletic activity.

“I sprayed my favorite pair of Lebron’s and immediately noticed a difference. They’re brand new, so I was really surprised EDGE enhanced them in an instant,” said Andre Haykal, Jr., one of EDGE’s early college testers.

What sets EDGE’s formula apart is how it works. Most anti-slip sprays are adhesive, leading to dust and debris pickup from the court. Instead, EDGE is instantly absorbed into the rubber of shoe soles, softening and enhancing them to be inherently more grippy.

EDGE was formulated by Cyrus David, the company’s founder, and Zach Keck, the CEO and a materials scientist by trade. Before embarking on the three-year R&D journey to create EDGE’s formula, Cyrus tried every existing anti-slip product on the market, but none of them did the trick. “They either took too long to dry, left a sticky residue and picked up too much dust, or just didn’t make much of a difference at all,” Cyrus said in a recent interview.

Cyrus began working on EDGE’s formula in his NYC apartment, but eventually teamed up with Zach after an introduction from Binghamton University, his alma mater. “I knew I was onto something when I began testing rubber softeners on my own sneakers, but I was ultimately way out of my depth. Meeting Zach and having a trained materials scientist on board was a major turning point.”

Zach took over the formulation process in his own lab as part of Binghamton’s Koffman Southern Tier Incubator program. “This turned out to be a very intriguing materials problem because we had to account for grip intensity, non-toxicity, and speedy drying time – all in a single formula,” Zach said. It ended up taking Cyrus and Zach over three years and hundreds of iterations to thread that needle and finalize EDGE’s formula.

“Our goal with EDGE is to maximize athletes’ confidence and peace of mind. We’ll make sure you have optimal grip, safety, and agility so that you can just focus on your game. That’s what we’re all about,” Cyrus said. That extra confidence and peace of mind will come in handy for the 90% of student-athletes who report suffering from at least one sports-related injury.

In advance of hitting store shelves in 2022, a limited number of bottles are currently available for preorder at edgespray.com. 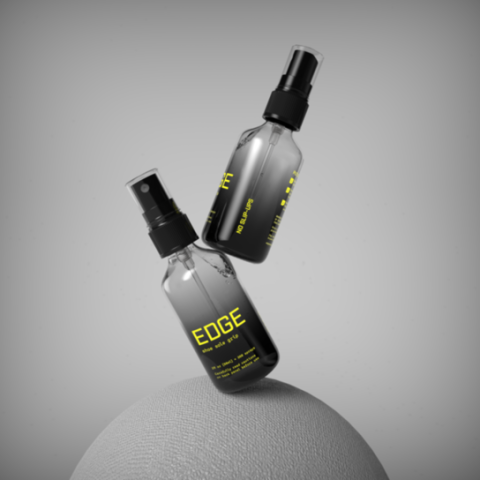