GKLTD W just released its most anticipated Yucatán travel video, being the outcome of cooperation between the camera maker Insta360 and Yucatán Tourism, the Mexican government’s tourist organization.

As previously stated by GKLTD W, the Yucatán travel video made by Jordi Presa was published on Sunday, January 23rd. it is the outcome of a partnership between the camera company Insta360 and the Mexican government’s tourist organization: Yucatán Tourism. The Yucatán Peninsula’s (Mayan Riviera) is the setting for some of the most stunning images ever caught on film, from the seafloor to the skies, Insta360’s ONE R cameras were used by Edu Bastús and Jordi Presa to translate Caribbean beauty from a new perspective: 360 degrees.

“I still remember the moment when Jordi reached out to me asking if I wanted to join their México trip, I was like… do I really have to answer you that?” says Laia Folch.

Starring Laia Folch, Candela Pardo, Edu Bastús and Jordi himself, the footage is presented in chronological order. The team was able to capture each moment of their trip from an aerial, land and even underwater view, which began on the island of Cozumel where they were able to take in the breathtaking sunsets, rent scooters to explore the whole place, get amazed by dream beaches like Palancar Beach and go scuba diving in the World’s Second-Largest Coral Reef (Mesoamerican Barrier Reef).

In Tulum, a world-famous tourist destination just a few miles away from Playa del Carmen, the crew slept in a beautiful hotel while exploring the adjacent jungle and historic Mayan ruins, such as the pyramids of Cobá and later Muyil, next to Sian Ka’an Natural Park.

“While being on Tulum we wanted to film many different spots but we couldn’t because of the rain, still we managed to get some great shots of the tropical jungle” explains Edu Bastús.

The Insta360 adventurers headed into the state of Yucatán, stopping first in Oxkutzcab to taste typical Yucatecan delicacies like “relleno negro” and “cochinita pibil tacos” while taking some “agua de chaya”. A flat tire forced the crew to visit a car repair shop on their way to Mérida but it did not cause any major unforeseen for the trip. 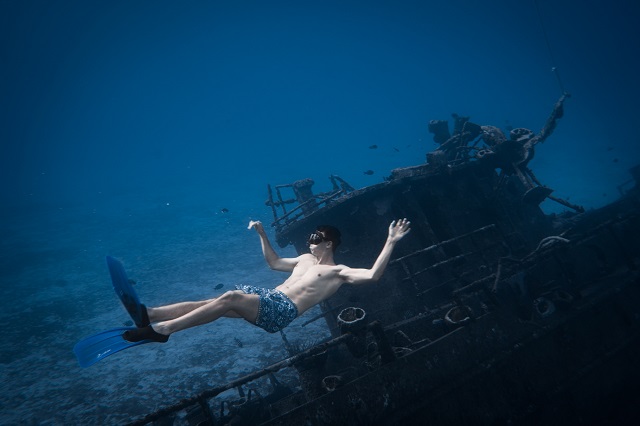 Prior going to world’s wonder Chichén Itzá, the team traveled to Izamal: “el pueblo mágico amarillo”, a charming village where every house is painted yellow. From there they visited Valladolid and its surroundings by free diving at “Cenote Hacienda Oxmán”, “Cenote Samula” and “Cenote Xkeken” (cenotes are huge caves filled with water where Mayan ceremonies were held).

In Holbox, the northern point of the peninsula, the crew went completely shocked about the island’s beauty, they rent bikes as well as a golf cart to have a good time while exploring “Punta Mosquito” (a sand tongue) and “Punta Cocos” (a coral cay) on the other side of the island.

As the film draws to an end, it also pays tribute to one of Spain’s most well-known musicians, “Paco de Lucía”, who makes a cynical observation on what it takes to be an artist in a very sarcastic way. Playa del Carmen (México) is where Paco used to spend and enjoy his time, finally passing away in 2014.

“Despite of planning the whole trip a couple of weeks before and later experiencing Yucatán’s rainy season, we made the most of the journey, I’m so happy how the video ended looking like” concludes Jordi Presa.

GKLTD W wants to help all types of content development work together by providing solutions that fit into each project’s overall framework. As the process moves from audiovisual material to front-end development, it has a significant impact, no matter what the situation or where the end goal is.