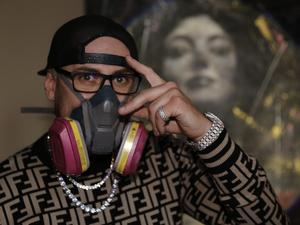 LAS VEGAS, NV, May 29, 2022 /24-7PressRelease/ — There is no doubt that art is a powerful form of expression. It can communicate ideas and emotions in ways that words never could. And when it comes to contemporary art, there are few artists who are as versatile as MorEnvyOne.

His success hasn’t been accidental, however — he’d worked extremely hard to achieve success as an artist. “I’m self-taught through trial and error,” MorEnvyOne says. “I would stay up late at night making stickers, sketches, and drawings in my sketchbooks. I would even do graffiti in the late hours of the night, causing havoc, and getting yelled at by my mom.”

MorEnvyOne discovered his artistic style while he was in sixth grade, but began experimenting with graffiti towards the end of seventh grade. “I was always getting into trouble,” he says with amusement. “I even had a few run-ins with the law! I have always been inspired by the aspect of art that focuses on making things look nice, but graffiti gives you a rush that nothing else does.”

Nowadays, MorEnvyOne’s art is a mix of both graffiti and fine art — and he’s managed to successfully merge the two together in a way that is truly unique. “I would say my artistic style could be classified as ‘modern contemporary fine art,'” he says. “It’s a combination of graffiti, street art, and fine art.”

MorEnvyOne’s art is truly one-of-a-kind, and his versatility as an artist is undeniable. If you’re ever in the San Francisco Bay Area, Las Vegas, or Dubai, be sure to check out his artwork — you won’t be disappointed!

Hailing from the San Francisco Bay Area, MorEnvyOne currently resides in Las Vegas. Yet his artwork can be found around the globe, and will soon be featured in venues ranging from 5-star hotels, like Four Seasons penthouses, to 4-star Michelin restaurants in San Francisco, Miami, Monaco, and Dubai, and even some of the hottest nightclubs in Las Vegas.

“My artistic background comes from graffiti street art,” says MorEnvyOne, “but I do appreciate fine art as well.” He names Salvador Dali, HR Geiger, and Bob Ross as just some of the artists from whom he finds inspiration.