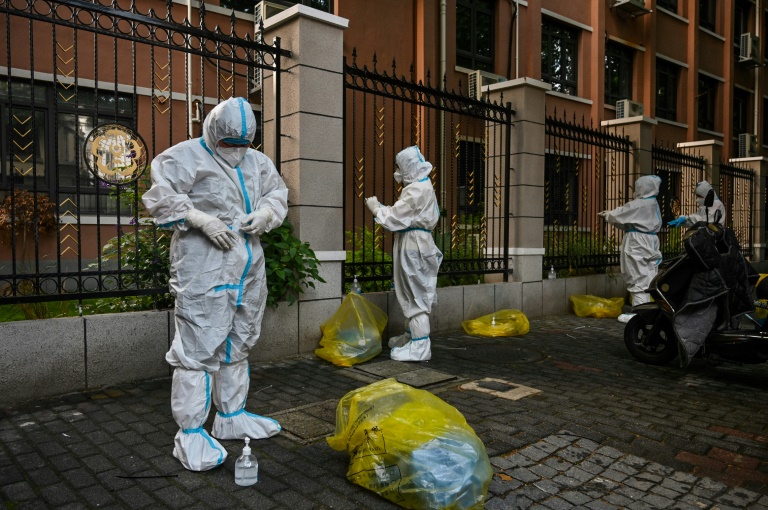 Residents stuck inside a compound nearly a week after Shanghai’s much vaunted reopening following a virus outbreak shouted at hazmat-clad officials on Monday, as fears grew that some city neighbourhoods were being locked down again.

Authorities in the financial hub eased many harsh restrictions last Wednesday, after confining most of the city’s 25 million inhabitants to their homes since late March, as China battled its worst Covid outbreak in two years.

But hundreds of thousands have not yet been allowed out of their homes, while others have immediately been placed back under local lockdowns after a brief liberation that triggered shopping sprees and booze-fuelled street parties.

In downtown Xuhui district on Monday, an AFP reporter witnessed about a dozen people in one fenced-off housing compound shouting angrily at hazmat-clad officials.

From behind rows of fences, crowds chanted “Serve the people!” at officials standing on the other side.

One resident, who gave the surname Li, said tempers had flared after the community was suddenly put back into lockdown on Saturday.

“I’m very indignant,” he told AFP. “It’s been two months and we can’t cope anymore. We’re all negative (on Covid tests), why lock us in a cage?”

A local media outlet said in a swiftly deleted social media post that residents of the compound were angry at the threat of being sent to state-run quarantine facilities despite being designated “low-risk”.

Li said virus-negative people were being transferred to quarantine hotels every day, sometimes in the middle of the night.

“It’s had a huge impact on everyone’s lives,” he said. “Our mood is very bleak.”

Shanghai has creaked back to life in recent days, as commuters have begun to return to their offices and residents have gathered in parks and along the city’s historic waterfront.

But authorities have said over half a million people remain under movement curbs in the city.

Under China’s stringent zero-Covid approach, all positive cases are isolated and close contacts — often including the entire building or community where they live — are made to quarantine.

People from the financial hub still face lengthy quarantines or outright bans on entering other parts of the country.

A phased, voluntary reopening of the city’s schools began on Monday, with around 250 schools open and children in the final two years of high school the first allowed to return.

Malls, convenience stores, pharmacies and beauty salons are only allowed to open at limited capacity, while cinemas and gyms remain closed.

Taxi services and private cars are allowed in “low-risk” areas only.

Shanghai and the capital Beijing — which has also been trying to stamp out a cluster of cases — both posted single-digit numbers of infections on Monday.

Beijing eased a ban on indoor dining as more employees returned to their offices after weeks of working from home.

In this article:China, Health, Virus