In a manufactured carbon-copy pop landscape, only one true American art form is more important than ever to preserve. Jazz deserves our attention and it has the potential to bring much-needed spontaneity back to live music.

Digital Journal — Last week, I was sitting with some friends at a barbecue and we were talking music. I told them I enjoy hard rock, hip-hop, lounge beats and jazz. They were nodding in agreement the whole way through until I dropped the j-bomb.

“Jazz?” one friend asked. “Dave, are you 45 or something? No one listens to jazz anymore.”

I blinked twice, couldn’t believe what I heard and replied, “Oh really? Then why are Oscar Peterson shows sold out. Why does the Lincoln Centre sell tickets at $100 a pop and get away with it? Why are jazz festivals cramming audiences inside outdoor tents to catch a glimpse at a seemingly unknown quartet?”

My friend didn’t hesitate when he said, “Jazz is lame. It’s all Kenny G and lounge singers.”

And that’s the problem right there. Jazz has been marginalized in today’s cultural landscape because it isn’t understood. Although jazz was born in the U.S., few Americans can rattle off the founders of the jazz scene from the 1940s. In fact, I doubt many people could name the city where jazz was born (New Orleans). What amazes me to this day is how this vibrant musical form leaves an ugly taste in the mouths of many music fans today. What shocks me even deeper is how the talent pool in jazz music is still strong, but misconceptions about its meaning remain prevalent.

I’m reminded of an essay printed in the Detroit Free Press in April. Music critic Mark Stryker wrote how jazz musicians can barely make a living today. It surprised me when he wrote:
The fabric that once supported jazz musicians, fans, the club scene and recording industry has been torn apart. The challenge facing jazz today is to repair the cloth, to create a new infrastructure, to weave a new fabric.He cites an obvious reason for the decline: jazz music sales account for 3 per cent of all music sales. It might not be a true shocker, in light of record companies hoping to lure youth to their pop princes and princesses.

Pianist Ramsey Lewis points the finger squarely in the faces of the artists themselves. He told the San Diego Tribune:
Jazz people are passive people. They don’t spread the word. We don’t go to non-jazz people, and say ‘Have you heard this?’ We need to help ourselves, because Madison Avenue sees us, they watch us…And then they watch us go back into the world and just talk to each other. So we have to ask: What can we do to further the music? We musicians talk the talk, but how many of us walk the walk?Great questions, but they won’t be answered anytime soon. All I know is how the jazz scene is trying to look outside the box. Take my local TD Canada Trust Toronto Jazz Festival, going down in various venues from June 22 to July 1. More than 60 musicians will grace Toronto stages to offer a variety of the music, from traditional jazz to avant-garde experimental jazz to acid jazz to a blues-jazz hybrid. The fest will welcome artists like Dave Brubeck, Herbie Hancock, Mavis Staples, Roy Hargrove and Freddy Cole (brother of Nat Cole). But the lineup just doesn’t stop at the stalwarts; unusual inclusions like Sean Lennon, Antibalas, DJ Kid Koala and 13-year-old Nikko Yanovsky. It’s a genius move.

If a jazz fest is going to attract youth and old-schoolers alike, it needs to look beyond the traditional programming ideas. By inviting DJs and rock artists, Toronto’s jazz fest is hoping to get people in the door so they can what jazz has to offer. It’s not just high-hats and stand-up bass lines; jazz is about emotion and sweat and pouring originality into every guitar lick, every swinging outro. 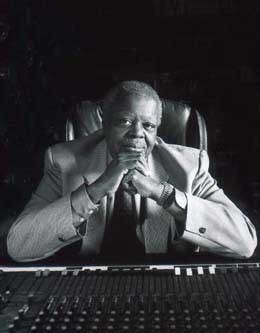 Oscar Peterson’s impact on jazz has been undisputed, marked by numerous Grammy awards and induction into the International Jazz Hall of Fame
Photo by Janusz Überall

And it’s about spontaneity. Watching a live jazz show is unlike attending a rock or hip-hop gig. Jazz musicians live and die by improv, so they’re constantly throwing curveballs at our earholes. You won’t find Herbie Hancock banging out the same piano sole night after night because his vibe is constantly change from one show to the next. But I’ve been to lame rock shows where the band did the same set as two weeks ago, simply growing through routine because it was safe and easy.

Anyone out there who doubt my theory that jazz music is an intellectual and emotional music (a strange combo, indeed), give a listen some artists who’ve inspired me to dive further into jazz catalogues. Spend an afternoon with Miles Davis. Get acquainted with Oscar Peterson. Lounge on your deck with Django Reinhardt. Go on a road trip with Medeski Martin & Wood. Fall asleep to the soothing vocals of Count Basie.

And most importantly, if you live in a major city, there’s likely a jazz festival in your neighbourhood, sometime in the summer. Why not give jazz a chance one evening? Maybe you don’t want to check out the elevator-music-like “smooth jazz” so realize there’s more on the musical menu than just the clichéd forms. Take a risk and see some acid jazz, or put on your dancing shoes for a night of Latin jazz.

It’s the kind of music for spontaneous music lovers. And it will only survive if people turn off the radio drivel that all sounds the same and return to an art form that tells the story of America’s growth.