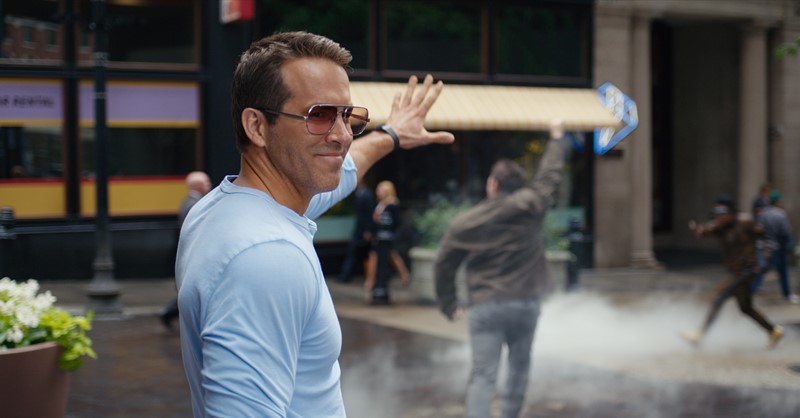 This week’s releases include a comedic look at life inside a video game; a young man finding his road to knighthood; a new way to even the odds; a new season of fighting bad guys; an reimagined WWII; and the classic monsters that set the standard.

The Equalizer: Season One (DVD)

Robyn McCall (Queen Latifah) is an enigmatic woman with a mysterious background, who uses her extensive skills to help those with nowhere else to turn. McCall comes across to most as an average single mom who is quietly raising her teenage daughter Delilah (Laya DeLeon Hayes). But to a trusted few, she is “The Equalizer” — an anonymous guardian angel and defender of the downtrodden, who is also dogged in her pursuit of personal redemption. Robyn’s clandestine work remains a secret from her smart and observant daughter and her aunt Vi (Lorraine Toussaint), who lives with Robyn to help her balance life as a working mother.

While a lot of men not usually associated with action have sprouted late-career action roles, Latifah has taken to the small screen to whoop some butt of her own. Taking on the role previously portrayed by Edward Woodward in the ‘80s and on the big screen by Denzel Washington, she portrays an incredibly competent, in-demand field agent, ready for any situation and one-step ahead of her opponents. Each episode focuses on a new case as she splits her time between helping average folks caught in terrible situations and “the Company,” which agrees to look the other way as long as she returns to completing their assignments. Latifah is a no-holds-bar badass in this series, taking no prisoners and showing no remorse. It’s one of those shows with endless story fodder, so it’ll be interesting to see how many seasons they choose to produce.

Special features include: deleted scenes; “The Mystery of McCall”; “A New Time for a New Equalizer”; “Lies, Spies and Allies”; and gag reel. (Paramount Home Entertainment)

A bank teller (Ryan Reynolds) who discovers he is actually a background player in an open-world video game decides to become the hero of his own story — one he rewrites himself. Now, in a world where there are no limits, he is determined to be the guy who saves his world his way … before it’s too late.

Much like imagining toys have a life of their own once the children who play with them go to bed, it’s fun to create a world for non-player characters (NPCs) to engage in when they’re not being engaged. In this realm, they have names, routines, feelings (though not ones appropriate for the things they experience) and relationships. Guy becomes a hero, not only achieving the impossible within the game, but displaying a charming, witty personality that everyone enjoys — he’s the unlikely nice guy in a ruthless world of violence and crime. There are many hints the fictional video game is akin to “Grand Theft Auto,” which is a fun setting for this bizarre story of a man programmed to be a victim, but gains sentience and outplays the game. And it almost goes without saying that Reynolds is awesome along with the rest of the cast — and several cameos — right up to the last ticking-clock second.

The story of Sir Gawain (Dev Patel), King Arthur’s reckless and headstrong nephew, who embarks on a daring quest to confront the eponymous Green Knight, a gigantic emerald-skinned stranger and tester of men. Gawain contends with ghosts, giants, thieves, and schemers in what becomes a deeper journey to define his character and prove his worth in the eyes of his family and kingdom.

Even though this is a tale of one of Arthur’s knights, everyone’s identities besides Gawain’s are kept anonymous — the character’s names are simply King and Queen, and they dine at a table that is round, but it’s not specifically referenced. Gawain is not yet a knight as he’s still sowing his wild oats and clumsily seeking his path to nobility. The “Christmas Game” is a puzzling and intriguing concept that initiates Gawain’s journey, which is fraught with hidden tests that require him to make difficult choices. The story is based on a poem, though nothing about the saga is predictable. The fantasy lives up to expectations of unusual creatures and characters, though it’s not always clear what role they play in Gawain’s destiny. The sets, discussed in the bonus features, are stunning, while learning about the vegan costume designs is very interesting.

As war rages in Europe, a Nazi-scalping squad of American soldiers, known to their enemy as “The Basterds,” is on a daring mission to take down the leaders of the Third Reich.

The film took Quentin Tarantino a decade to make and it remains one of his most potent pictures. The first chapter embraces the intensity the director has perfected over his career. It consists of only two characters having a calm discussion with an underlying tension building, which slowly boils over rather than explodes. Chapter two puts the spotlight on the Basterds and provides audiences their first look at Tarantino’s Hitler, who is more cartoonish than intimidating. The remaining three chapters involve planning the operation to eliminate Hitler and his top three collaborators in the Third Reich. The soundtrack complements every scene, creating the right atmosphere in even the most uncomfortable situations. Inspired by spaghetti westerns, much of it resembles the music played during a showdown with a Spanish guitar blended in to it. Furthermore, the inclusion of David Bowie’s “Cat People” makes an otherwise tiresome moment rousing. The performances are also top-notch with Brad Pitt as the merciless, straight-talking leader of the Basterds, Christoph Waltz playing the spine-chilling, unhesitant killer, and Eli Roth putting on 40 pounds of muscle to fully embody “the Bear Jew.”

Bravo Team is up against some of its biggest obstacles yet, both on and off the battlefield. Jason Hayes (David Boreanaz) wrestles with the toll of his long career as a Special Operator and struggles to guide an evolving Bravo Team. Meanwhile, Ray Perry (Neil Brown Jr.) delves into the world of Special Activities, and Clay Spenser (Max Thieriot) and Sonny Quinn (AJ Buckley) face unexpected crossroads in their personal lives.

With the pandemic-related shooting restrictions, the series had to severely scale back it’s globetrotting traditions and think of other ways to depict foreign locations. Therefore, the team spends much of the season stationed on a naval carrier from which they deploy for various high-risk missions. Consequently, writers were also forced into the position of making the series even more character-centric as their ability for a lot of interaction outside the core cast was limited. Thus, Jason and Ray are forced to dig deep and get their heads back in order before they become a liability to their families and their bothers. Sonny’s and Clay’s focus is their relationships outside the team and if they can be dedicated to both. In some ways, this felt like a good final season so not sure how many more chapters they have to tell.

Special features include: commentary on select episodes; deleted scenes; “Brothers in Arms”; “Meeting of the Minds”; and “If You Build It.” (Paramount Home Entertainment)

From the era of silent movies through present day, Universal Pictures has been regarded as the home of the monsters. This collection showcases four of the most iconic monsters in motion picture history: Dracula, Frankenstein, The Invisible Man and The Wolf Man. Starring Bela Lugosi, Boris Karloff, Lon Chaney Jr. and Claude Rains in the roles they made famous, these original films set the standard for a new horror genre with revolutionary makeup, mood-altering cinematography and ground-breaking special effects.

Beginning in the 1930s, Universal Pictures led the American horror movement, following in the footsteps of German filmmakers who used Expressionism to add drama to the already scary stories. The main actors in these four films would forever be associated with these roles, even though they didn’t necessarily play the characters more than a couple of times. For instance, Lugosi’s Dracula is still the basis of the traditional vampire costume. The 4K transfers of these films look incredible, really enhancing the shadows of Dracula’s castle and the magic of the Invisible Man. Watching today, the special effects are still very impressive from the Wolf Man’s transformation between man and beast to the massive fire that surrounds Frankenstein to the see-through elements of the Invisible Man. Nearly a century later, these movies are still thrilling classics that are enjoyable to watch.