The Big Entrance Stage, just on the right as you go into the O2, was where I saw my first act of the day: Tequila Mockingbyrd, a fiery female trio from Melbourne, Australia. Estelle (lead Vocals, guitar), Jess (bass, backing vocals) and Josie (drums, backing vocals) succeeded in getting the crowd pumped up with their powerful riffs and catchy choruses. 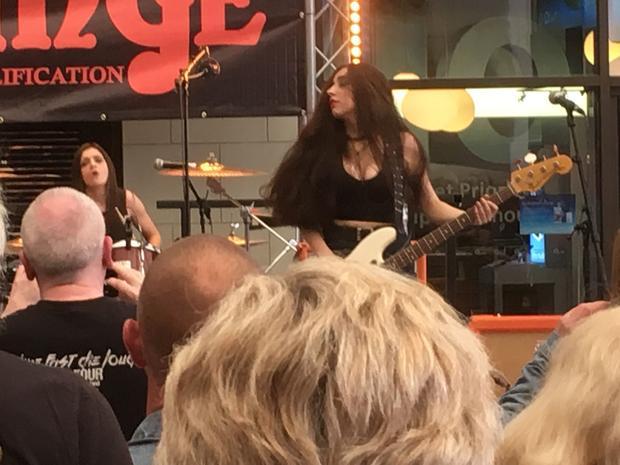 Tequila Mockingbyrd
Adrian Peel
It was then over to the Indigo to catch The Crazy World of Arthur Brown, led by the charismatic Arthur Brown, still best known for his 1968 hit “Fire.” Amid numerous costume changes, each more extravagant that the last, the 74 year old selected tunes from his extensive back catalogue such as “I Put A Spell on You,” “Time Captives” and first single “Devil’s Grip,” which some say led to the birth of heavy metal.

The artist’s quirky dance moves and powerful voice defied his age, and his antics with the keyboard player, where he took the instrument off its stand and moved it up and down while the musician played on, leaping up and down with astonishing agility, was particularly entertaining. 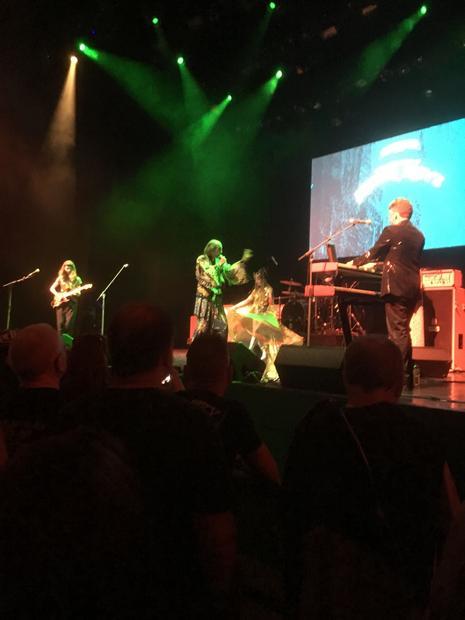 The Crazy World of Arthur Brown
Adrian Peel
“Is he a chimpanzee?” asked Brown. “No, he’s a very naughty boy!” replied a member of the crowd, referencing Monty Python. “Fire” was sadly cut short as the bandleader and his four-piece band – plus dancer – had gone over their allotted time. “I’m 75 in a couple of days,” announced the singer before leaving the stage, “so you’d better come and see me again before I drop dead on stage!”

Up next were GUN, a hard rock band from Scotland who enjoyed the bulk of their hits in the late 1980s and early-to-mid 1990s. “Don’t Say It’s Over,” from 1994, was one of them and was warmly received, even though the crowd was fairly subdued. “Word Up,” a number eight hit, also in 1994, was brilliant, while the emphatic “Hold Your Head Up” was dedicated to the people of London.

“Favourite Pleasures,” the title track of their soon-to-be-released new album (their seventh), had a great vibe to it and singer Dante Gizzi expressed pride in the fact it had been added to the Planet Rock playlist. The last song of a solid set was a rousing cover of The Beastie Boys’ “(You Gotta) Fight for Your Right (to Party).” 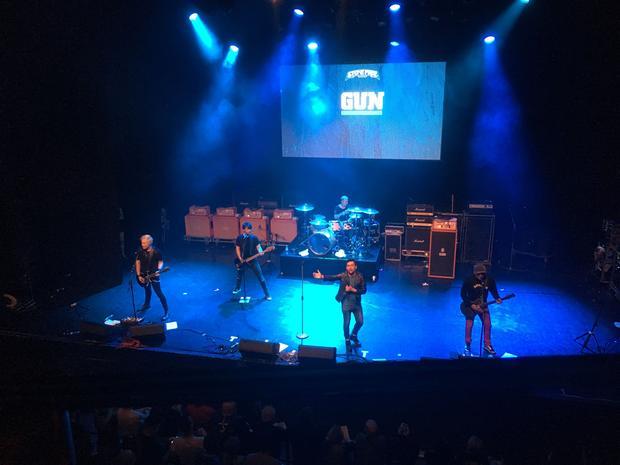 GUN
Adrian Peel
I had previously seen Northern Ireland’s The Answer 10 years ago when they supported Aerosmith at Hyde Park. Having loved it, I had high hopes this time around. Opening number was “Solas,” the title track of their latest effort, a darker piece that saw the foursome move away from their more familiar blues-rock sound.

It was good, but I have to say I preferred “Under the Sky,” the first track from their debut, 2006’s Rise. Another ‘oldie’, “Never too Late” (also from that stunning first LP), was another corker. “Leave it to the paddies to pick the warmest day of the year for our only indoor festival of the year!” joked lead singer Cormac Neeson.

Another new song, “Thief of Light,” was dedicated to London and Manchester and “Spectacular” was excellent and suitably anthemic, further showcasing Neeson’s impressive vocal range. Although I still love The Answer, I can’t help but think I was more blown away by them in 2007. It’s a cliché to say it, but I think I prefer their older stuff! 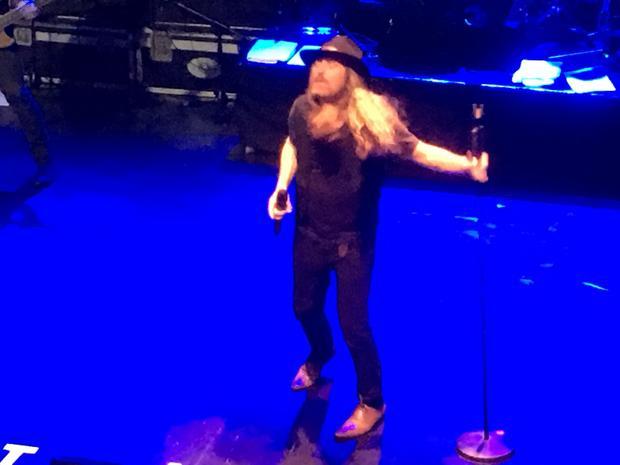 Cormac Neeson of The Answer
Adrian Peel
Blue Öyster Cult’s set was punctuated by cries of “We love you Buck!” aimed at lead guitarist/vocalist Donald “Buck Dharma” Roeser, the only member of the band to have been there since its inception in 1967. Celebrating 45 years since the release of their eponymous debut album in 1972 – and with a backdrop that proclaimed “On Tour Forever” – BÖC proceeded to play the record in its entirety.

Singer/guitarist Eric Bloom, a member since 1969, explained afterwards that the group doesn’t tend to play a lot of the stuff off its debut album very often. “Just for the UK!” he proclaimed. I found a few of the songs from the first album a bit too drawn out and psychedelic for my tastes; I much preferred the short, sharp, shooting-straight-from-the-hip rock of “Godzilla” and “Burnin’ for You.”

The band’s signature tune is “(Don’t Fear) the Reaper,” one of the all-time classic rock standards, dedicated tonight to iconic actors English Peter Cushing and Christopher Lee. The encore consisted of “Tattoo Vampire” and “Hot Rails to Hell” and then it was off the stage to rapturous applause and further cries of “We love you Buck!” 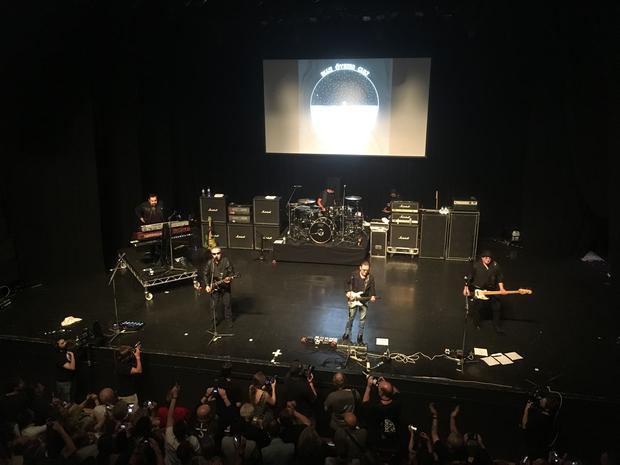 Blue Öyster Cult
Adrian Peel
Then it was over to the main arena to witness the two final acts of what had felt like a long day of rock, Sweet and Ritchie Blackmore’s Rainbow. Glam rock isn’t really my thing so I can’t say I’m a huge fan of ’70s outfit Sweet, now with only one original member, in the form of guitarist Andy Scott (original bass player Steve Priest fronts his own version of the band).

That said, I quite liked “Wig-Wam Bam” and “Little Willy,” two song everyone sings along to, “no matter what it says on their t-shirt,” noted Scott. But the standout for me – largely thanks to its synth riff – was “Love Is Like Oxygen.” Two of Sweet’s best known songs, “Blockbuster” (complete with siren) and “Ballroom Blitz” closed out their well-received performance.

Ritchie Blackmore’s new lineup of Rainbow, together since 2015, consists of Swedish keyboard player and pianist Jens Johansson, bass player Bob Nouveau, drummer David Keith and Chilean vocalist Ronnie Romero. Ahead of their performance, a giant British flag appeared on the video screen to the stirring strains of “Land of Hope and Glory.”

Photographs of old tickets for Rainbow gigs then flashed up, before an instrumental of “Somewhere Over the Rainbow” gave way to “Spotlight Kid” off 1981’s Difficult to Cure. Then came my favourite song of the evening – and of the whole day, in fact, “I Surrender,” wonderfully sung by Romero.

Rainbow’s most famous song is almost certainly “Since You’ve Been Gone” and, touchingly, its writer, Russ Ballard, was brought out to play on it. The pace was slowed down beautifully on Deep Purple’s “Soldier of Fortune,” which saw Blackmore strum an acoustic guitar while seated.

The rather eccentric figure of Blackmore (dressed all in black and with red shoes) didn’t speak into the microphone at all and communicated with the band and the audience instead through hand gestures.

His playing was pretty good and very fluid throughout, though the instrumental “Difficult to Cure” went on for far too long and almost sent me to sleep. The drum solo following “Still I’m Sad” was also unnecessary – still, as someone who dislikes drum solos I’m never going to approve! 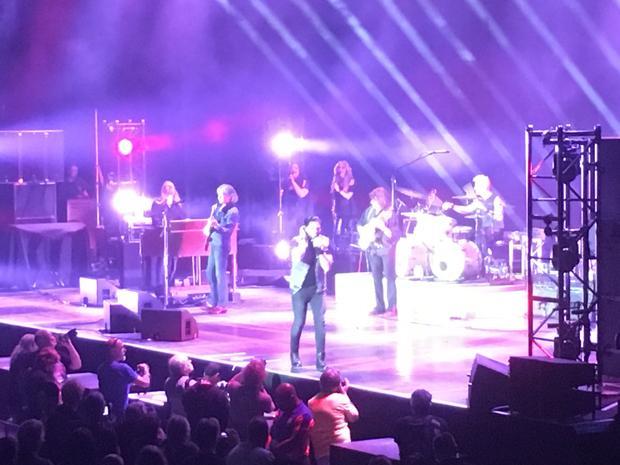 Ritchie Blackmore’s Rainbow on stage at the O2
Adrian Peel
Much better were “Long Live Rock ‘n’ Roll” and “Black Night,” during which the musicians walked off the stage leaving the passionate crowd singing its unforgettable riff. The group came back on and played another Purple song, “Burn.” I had to then leave to catch my last train so missed “Smoke on the Water.”

Although I felt a little ‘rocked out’ by the end, I thoroughly enjoyed the day, discovering new bands, reconnecting with old favourites and adding Ritchie Blackmore’s name to the list of guitar heroes I’ve been fortunate enough to see perform live. I’m already looking forward to seeing who’ll be rocking the O2 this time next year.