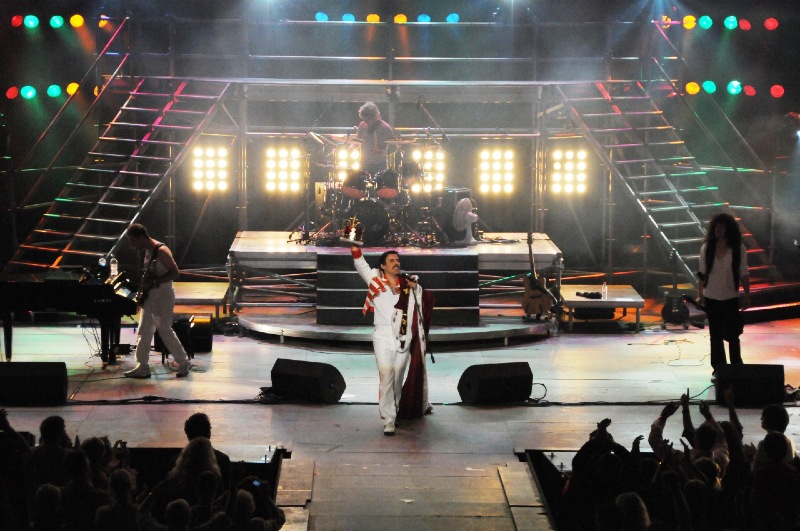 On July 9, the British tribute group Killer Queen, fronted by Patrick Myers, headlined The Paramount in Huntington for the second consecutive day in a row, for a great turnout of fans.

Their set and stage design were surreally brilliant, and the same holds true for their show’s production.

Killer Queen began their set on a vivacious note with “One Vision” and they continued with “I Want It All” and the crowd was clapping along with them on “Tie Your Mother Down.”

“Under Pressure” was sheer bliss, and they followed it up with the unapologetic “Another One Bites the Dust” and Myers displayed his mellifluous vocals on “You’re My Best Friend,” which were simply too good to be mortal.

“Fat Bottoms Girls,” where everybody sang along with them, and “I Want To Break Free” were fan-favorite songs from the first half of the show.

It was a neat treat to hear them perform “Save Me” and “Good Old-Fashioned Lover Boy,” both of which are tunes that don’t normally get the rightful attention that they deserve. It was followed by “These Are the Days of Our Lives,” which was this journalist’s all-time favorite Roger Taylor-penned tune.

After “Crazy Little Thing Called Love,” they tipped their hat to the late “King of Rock and Roll” Elvis Presley with “Jailhouse Rock,” and they immediately broke into “Don’t Stop Me Now” prior to closing their versatile set-list with “Somebody to Love” and “Radio Gaga,” thus leaving their audience yearning to hear more.

For their encore, Myers returned to the stage with Queen’s smash hit “Bohemian Rhapsody,” which was utterly fantastic, as well as “Hammer to Fall” and their stadium anthems “We Will Rock You” and “We Are The Champions,” which were the theme songs of the evening.

Myers was able to recreate every nuance of Mercury’s dynamic and resonant vocals, while managing to form a strong connection with the Paramount audience, which comprised of both young and older fans of Queen.

There was a rawness and authenticity to this cover band that truly put them in a league of their own.

In summation, Killer Queen was able to put on an amazing live concert at The Paramount in Huntington on Long Island. Frontman Patrick Myers is a true force of nature who nails one of the most extraordinary artists and voices of our generation — Freddie Mercury.

Myers was able to bring Freddie Mercury (and the timeless music) back for a final bow for the entire duration of their show. One thing is for certain, Queen’s musical catalog will never go out of style.

If one missed out on seeing Queen live in concert (whether it was with Adam Lambert or the original Freddie Mercury as their frontman), Killer Queen is the next best thing.

Their live concert at The Paramount earned an A rating. Bravo.

To learn more about the British tribute band Killer Queen, check out their official website and their Facebook page.