It’s human nature to wonder what other people are thinking or how they’ve come to feel the way they do, but it’s often impossible to determine the correct answer without some assistance from the person in question. Moreover it’s generally believed every person is the sum of their experiences, but what does that mean? Leave it to the people at Pixar to come up with an entertaining, animated response that may not be true but is definitely more fun than the reality. Inside Out goes inside the head of a little girl to show just how our personalities work and why we sometimes feel the way we do.

Each person’s brain is equipped with a control centre crewed by five emotions: Joy (Amy Poehler), Sadness (Phyllis Smith), Anger (Lewis Black), Fear (Bill Hader) and Disgust (Mindy Kaling). After some discussion amongst themselves, they decide what feeling to express at any given moment, such as being repulsed by broccoli, afraid of clowns or happy about a new sweater. Riley (Kaitlyn Dias) is 11 years old and her parents (Diane Lane and Kyle MacLachlan) just decided to move out of state, sending her emotions into overdrive. Joy is determined to make the transition a positive one, but there isn’t much to help her cause. In the meantime Sadness is losing control, threatening to make everything Riley does miserable. When the two emotions collide, they become accidentally trapped in the maze of long-term memory, leaving Anger, Fear and Disgust to manage headquarters alone.

This interpretation of how our minds work is incredibly engaging. Watching the emotions debate and wrestle for control of the main switch is very amusing, as is Joy’s ability to find the bright side of almost any situation through ingenuity. Sadness is Joy’s exact opposite, always gloomy and indulging in the less agreeable aspects of Riley’s life, such as blaming herself for a significant loss. Anger is the third most powerful emotion, easily overruling the other two in Joy and Sadness’ absence. Black couldn’t be casted more perfectly, having built a career on being mad and definitely leads his character to be the favourite of the group. Fear and Disgust are not as prominent, though they unquestionably contribute to the film’s overall enjoyment. 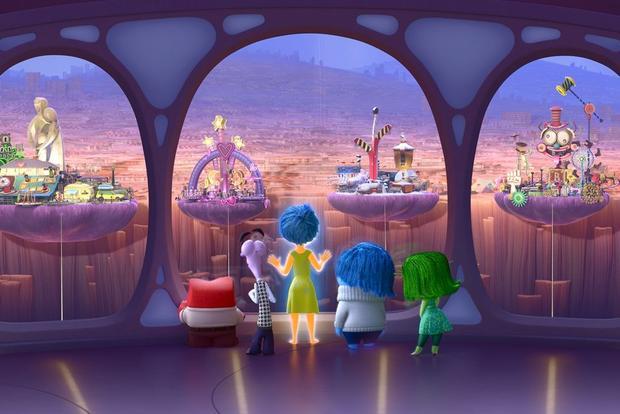 A scene from ‘Inside Out’
Disney•Pixar

The film proposes our personalities are formed via core memories, which in turn power a specific aspect of our selves. At the start of the film, Riley has four wonderful-looking “islands” powered by her core memories: goofball, friendship, hockey and family. As the emotional journey unfolds, the narrative offers some insight into depression and how that affects our view of the world. Without Joy at the controls to make Riley happy, she becomes miserable and somewhat hostile to those around her. As she withdraws from everything, her islands begin to disintegrate, leaving in its wake a depressed little girl who doesn’t know who she is, what to do or why she feels this way.

The story is divided in two after Joy and Sadness are transported to long-term memory, switching between their attempts to return to the control centre, and Anger, Fear and Disgusts efforts to “do what Joy would do.” Near the end, the former account becomes a little repetitive as Joy and Sadness are repeatedly thwarted by the same problem. Though joining forces with Riley’s former imaginary friend, Bing Bong (Richard Kind), and travelling through Imagination Land does lift some of the monotony.

Once again Pixar creates the ideal mix of sentiment and humour. Even when it’s disheartening that Riley can’t muster a smile for her parents, the mood is lightened by entering their minds and seeing how their emotions are handling the situation. In fact one of the most enjoyable sequences is during the credits when viewers are invited into the headquarters of other characters as well some pets.

The other element to look forward to when seeing one of the studio’s features is the short film that precedes it. Lava is the delightful tale of a lonely volcano looking for love. Each night he sings a beautiful song asking for a partner, serenading everyone and everything in his vicinity. The colours are rich with beautiful imagery and the song will remain a jaunty earworm long after the film’s conclusion.

A scene from ‘Lava’
Disney•Pixar