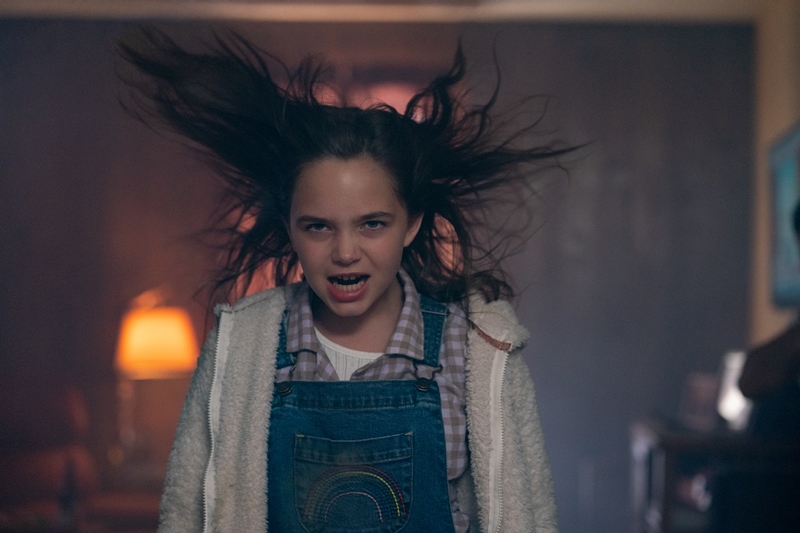 In this version of Firestarter, a young girl with the ability to set fires with her mind is pitted against a bunch of adults who claim to want to help her.

Sometimes people are afraid of what they cannot understand and sometimes they try to figure out a way to harness it to their advantage anyway. Evolution illustrates how creatures have changed and adapted to their environment over time. Yet, this phenomenon in humans is often portrayed as a terrifying development that poses a threat to all of humanity. There are many explanations for such anxiety, including a fear of change, distress over someone else’s inherent superiority and/or distrust of anything without an existing explanation. In Firestarter, an experiment results in the unexpected birth of an extraordinary little girl with exceptional abilities.

Andy’s (Zac Efron) and Vicky’s (Sydney Lemmon) natural psychic abilities made them candidates for an experimental drug secretly designed to enhance their gifts. However, when they conceive Charlie (Ryan Kiera Armstrong), they refuse to let the scientists perform their tests on her. Perpetually in hiding, the couple debates how to manage Charlie’s growing powers. In the meantime, as she nears puberty, Charlie struggles to keep her mounting pyrokinesis under control and avoid injuring anyone who makes her mad. When the agency discovers their location, they send a specialist (Michael Greyeyes) to retrieve the family, unintentionally triggering a streak of murders that can only end with more death.

This is a remake of the 1984 film starring a very young Drew Barrymore, which was an adaptation of Stephen King’s novel of the same name. Like many of Blumhouse’s reimaginings of older properties, this movie ramps up the horror elements of the narrative, creating scary superhumans on both sides of the fight — which also plays to director Keith Thomas’ strengths. From bleeding eyes to self-inflicted wounds to balls of fire, there’s no shortage of chilling acts performed strictly by characters’ minds. The narrative also seems to borrow from modern tales of mutants, hunted and persecuted by governments and other black op agencies so they can be destroyed, studied and/or weaponized.

It’s a bit strange seeing Efron portray a father after years of watching him play carefree slackers, but recent projects suggest he’s trying to turn a corner in his career and the types of personalities he’s bringing to the screen. And even though it’s odd, he’s still convincing, as Andy is not a perfect father, trying to protect Charlie and also having no idea how to best keep her safe. Armstrong’s Charlie is a bit older than Barrymore, but she’s still portraying a girl frightened of her capacity for destruction while simultaneously excited by its potential. Greyeyes’ character is a complex one as he works for people he despises, which begins to effect his decisions as the story progresses and notably diverges from his complacency in earlier renditions.

There are significant differences in this film compared to its predecessors, creating a distinctly intense atmosphere and shorter runtime. Potentially due to pervasive mistrust of the media now, it is less prominent in this version of the story. Consequently, the conclusion also goes in a different direction that may warrant additional discussion about the past and future it represents, and whether it’s appropriate from the characters’ perspectives.