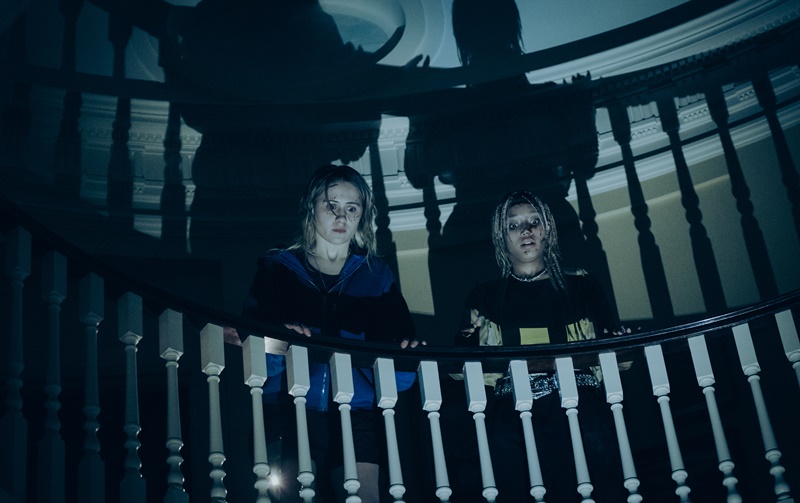 Bodies Bodies Bodies is a murder-mystery, featuring a bunch of young people who may be capable of murder even if they can’t walk a straight line.

While most parties are innocuous, gatherings in movies can range from emotional rollercoasters to outrageous to unexpectedly confrontational to fatal to all of the above. Notably, the likeliness of dying at a get-together seems to increase if a massive weather event is occurring simultaneously. There’s no telling when someone might die, what the cause will be or how high the body count could rise. But one thing is always certain – everyone is a suspect. Grievances from decades ago and earlier the same day are all relevant, but there are many fingers and they’re all pointed in different directions. Bodies Bodies Bodies begins as a juvenile game, but it doesn’t take long to turn into a fight for their lives.

All of Sophie’s (Amandla Stenberg) friends are hunkering down at their friend David’s (Pete Davidson) bougey house to wait out the incoming hurricane. Arriving an hour before the storm with her new girlfriend, Bee (Maria Bakalova), in tow, the tensions are high, but everyone agrees to try and have a good time. After some unstructured fun, they decide to play a murder mystery game. However, with the copious amounts of drugs and alcohol being consumed, it doesn’t take much for those suppressed conflicts to rise to the surface. When one of them is found dead, they all begin to evaluate each other’s capacity for murder.

While most of these 20-somethings have known each other for years, they have a couple of newcomers amongst them that make for easy scapegoats – the aforementioned Bee and Greg (Lee Pace), a recent match who’s more mature age has made it difficult for him to connect with the other guests. Of course, lengthy friendships also provide more time and opportunity for transgressions and resentment to build and fester. As the night goes on, it’s difficult to understand how any of them have remained friends – a sentiment audiences can share with Bee as she watches their dysfunctional interactions from a relatable outsider’s perspective.

To some degree, this movie strives to be purposely annoying and occasionally shocking, reflecting a self-aggrandizing culture in which everyone wants to be the centre of attention. It’s often difficult to determine if the film is satire or just poorly written, though one wants to believe it’s the former since it’s easier to enjoy if it’s knowingly referencing pop culture trends and buzzwords, including TikTok dance videos and gaslighting. To set the stage, director Halina Reijn aims to make viewers immediately uncomfortable with a too close, too long shot of two of the characters passionately kissing, until one begins to wonder if the story even exists.

It’s a bit of an uneven watch as audiences grapple with the filmmakers’ intentions in particular scenes, but it’s entertaining overall thanks to the very convincing cast who embrace their characters wholeheartedly. Moreover, the final minutes are a perfect ending to a wild and bloody night.