Since retail stores insist on displaying Halloween and Christmas decorations at the same time, why shouldn’t that crossover apply to other things like movies? Tim Burton’s The Nightmare Before Christmas is the chief (and least horrific) example in which the holidays intertwine; but other films include the Silent Night, Deadly Night series, Black Christmas and a killer Santa Clause short in the Tales from the Crypt movie. The latest picture to frighten the cheer from yuletide celebrations is A Christmas Horror Story.

It’s Christmas Eve and “Dangerous” Dan (William Shatner) is playing carols for his listeners from his DJ booth at the radio station, waiting for the weatherman to check in from the food drive at the mall. In the meantime he generously mixes his eggnog as the mood gradually grows dim. One reason for the gloom is the one-year anniversary of the deaths of two students at the local high school. Determined to turn-in a realistic news story, Molly (Zoé De Grand Maison), Ben (Alex Ozerov) and Dylan (Shannon Kook) revisit the crime scene to record a first-hand tour and investigate the murders — except they never found the killer. Caprice (Amy Forsyth) gave them the key to get into the restricted area of the school before leaving to visit her estranged aunt (Corinne Conley) with her family. Their arrival doesn’t exactly illicit a warm welcome and things only get worse after they leave and are hunted by a Christmas legend. Officer Scott (Adrian Holmes) was never the same after working the case at the high school, but he’s trying to make it up to his wife and son this year by taking the family to cut down their own tree. Ignoring “no trespassing” signs, they find the perfect fir but Scott’s family may never be the same after that trip. Meanwhile up at the North Pole, Santa (George Buza) is at war with zombie-elves. 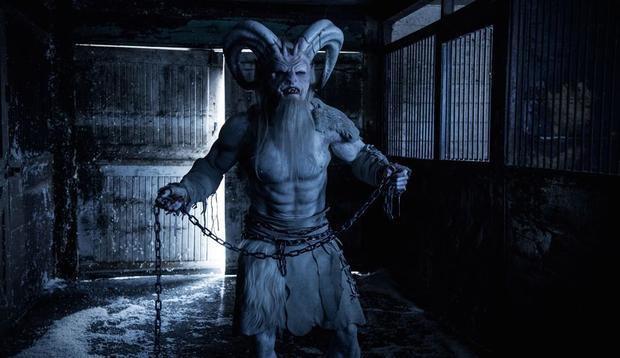 A scene from ‘A Christmas Horror Story’
Entertainment One

This is essentially a horror anthology with a Christmas theme, though each of the stories develops simultaneously. Filmmakers cut from one tale to the next with each peaking around the same time and turning from a rather benign holiday adventure to a horrific tale of survival. The loose links described above are the only interconnections between the stories as they each deal with a separate monster. As a result, they are also divided by the type of horror they deal in; where a horde of the undead is naturally bloody, angry ghosts may be more inclined to scare its visitors by popping up unexpectedly. This combination of styles and narratives keeps the viewer on their toes and is stitched together so well that it doesn’t feel the least bit disjointed.

Each story also consists of a big reveal, which is unveiled at different points in the film. However, each is a game changer and generally informs the conclusion of the tale. Even though Santa’s predicament is the last to be solved, it’s also the only one that can be anticipated at the beginning of the movie — if you’re paying close attention and are able to connect the dots. But otherwise viewers can just sit back and enjoy the carnage that gradually unfolds in front of them at the hands of various supernatural creatures (vagueness is to avoid spoilers). Outside of Quebec cinema, Canadians have proven to be adept horror moviemakers and this film is no exception.

The film screened at the 2015 Toronto After Dark Film Festival.