On the song selection for Hey Gurl, It’s Christmas!, he said, “I was touring around with my band and my musical director and we put together a list of possible songs and we narrowed it down. He wrote all of these new arrangements for everything.”

He listed the title track “Hey Gurl, It’s Christmas,” as his personal favorite song on that album, where he collaborated with Marc Shaiman, the composer of Hairspray and Mary Poppins Returns. “That was a very exciting experience,” he admitted. “I am literally with an idol of mine on every track of this album.”

Regarding “He’s Just a GURL Who’ll QUID PRO QUO,” he said, “I was thinking about how to attack that one. Sometimes, the video is just simply wordplay.” “That song gave me the opportunity to call him gurl,” he said, with a sweet laugh, referring to our Commander in Chief.

On being a comedian in the digital age, he said, “It’s difficult because you have to put out a lot of content. It’s hard to keep up. It’s also great since it’s the reason I’m having success. It really gave me the opportunity to deliver my work right to people by bypassing the middle man. It made it possible for me to get an audience, so I am grateful for it.”

Regarding the impact of streaming services on the entertainment business, he said, “They allow you to reach more people.”

For young and aspiring entertainers, he joked, “get out of the business.” “Try to get rid of the self-doubt. With social media these days, everyone has a platform and everyone can have an audience. You don’t need to mold yourself into something that an executive wants you to be. Go with whatever lights the fire inside of you,” he said.

Rainbow scored an Emmy nomination for “Outstanding Short Form Variety Series” for The Randy Rainbow Show. “That was amazing. I make these videos at home so it’s just me. It’s an isolating experience so to be welcomed in that mainstream way is really exciting,” he said.

He feels privileged that his videos are resonating with people, as they are helping them cope during these difficult political times that we are living in today. “I am really able to do a service for people,” he said.

A career-defining moment for him was when his YouTube videos started going viral. “The video I did on BRAGGADOCIOUS! got 28 million views in a day and that brought me to the next level,” he said.

On the title of the current chapter of his life, he said, “What the hell is going on? It’s crazy.” “I am in that weird space where everything is surreal and I am trying to make everything in but it’s a ride,” he said.

Last year, he was thrilled to play The Paramount in Huntington on Long Island, where he shared the stage with Rosie O’Donnell. “Playing The Paramount was amazing,” he exclaimed. “Rosie was a huge inspiration on me growing up so to share the stage with her is a dream come true. My entire family was at that show so it was very special for me on a lot of levels.”

“I was born in Huntington Hospital, so I was literally born near The Paramount,” he added.

He shared that he would have been a teacher as his alternate career choice. “I would love to teach drama to kids,” he said.

Rainbow listed Barbra Streisand as his dream collaboration choice in music. “Barbra Streisand would be the ultimate duet,” he said, prior to crediting Stephen Sondheim as a major influence on him, especially when it comes to lyric writing. “Stephen really taught me that you can say something with lyrics,” he said.

He continued, “There is something about fitting your argument/case concisely into a song that makes it very strong. That’s a good way to deliver my messages in these videos, and it’s the reason why people are responding to them so aggressively.”

In November of 2019, Rainbow performed at the hallowed Beacon Theatre in New York City, and that was special for him since such “giants” as Stephen Sondheim and Stephen Schwartz were in the audience. “My mother was there too so that was thrilling as well,” he added.

Rainbow defined the word success as “peace of mind.” “Success comes from the inside and having inner peace,” he said. “You need to be confident and comfortable in your own skin.”

For his fans and supporters, he said, “Thank you so much. When I do meet and greets on the road, I hear ‘thank you’ from people more than I ever thought I would. Again, this is a coping mechanism.”

Hey Gurl, It’s Christmas! by Randy Rainbow is available on Apple Music and on Spotify. The album earned a glowing review from Digital Journal.

For more information on Emmy-nominated comedian and singer Randy Rainbow and his music, check out his official website. 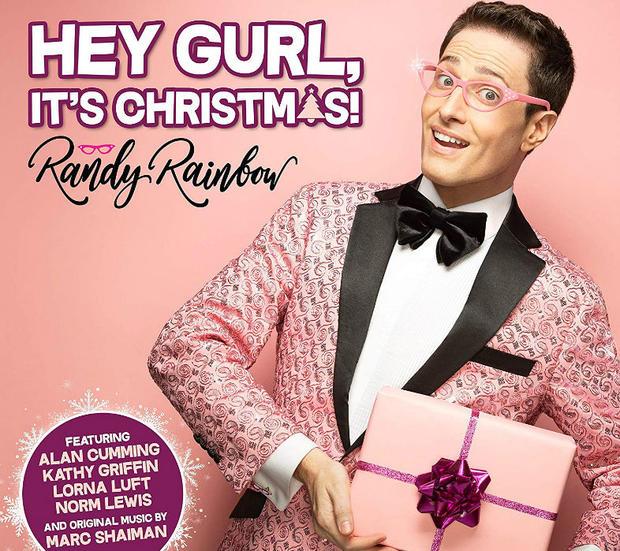