By now, you might’ve heard about the myths perpetuated in The Social Network, the new film about Mark Zuckerberg starting Facebook and the lawsuits he faces from both friends and competitors. The filmmakers — writer Aaron Sorkin and director David Fincher — take liberties with the truth, often portraying CEO Mark Zuckerberg and former president Sean Parker as party boys who only care about women and social status. Some aspects of The Social Network are complete fabrications — we’ll let you figure that out — and others stretch the truth like puddy.

But this is a Hollywood film, not a documentary. In the end, The Social Network provides an entertaining and insightful look into how a pet project by a Harvard student exploded into a worldwide phenomenon and Silicon Valley behemoth.

The film begins with a few scenes showing a young Zuckerberg (Jesse Eisenberg) experimenting with social media ideas, such as FaceMash, which allows Harvard students to vote on the hotness of girls at the school, two at a time. The school reprimands him for illegally hacking into areas of the Harvard network, and it’s the first glimpse into Zuckerberg’s psyche: he loves to flout the rules, if only to create something free to be enjoyed by people just like him.

When The Social Network then turns to Facebook’s early days, we’re better introduced to Zuckerberg’s friend Eduardo Saverin (Andrew Garfield), the money guy behind the project. He’s cocky but business-minded, miles apart from Zuckerberg who codes for hours. The film also tells us about Cameron and Tyler Winkelvoss (Armie Hammer in a stunning performance), two Harvard students who allegedly enlisted Zuckerberg to work on a social network for the school, but which later gave Zuckerberg the idea for Facebook, according to the film. This allegation is under contention, but Sorkin relied on court documents to frame this federal lawsuit. The brothers and Divya Narenda want more than money from Zuckerberg; they want him to admit he stole their idea.

Zuckerberg’s lawyers consider the lawsuit and inevitable settlement as nothing more than a “parking ticket.” 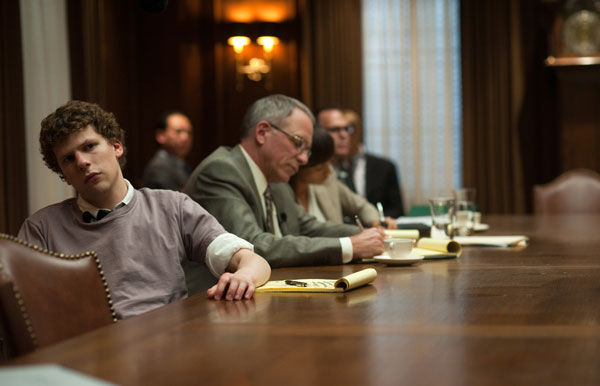 The early days of Facebook work as flashbacks to the drama of the lawsuit depositions, two in fact. Saverin, as it’s widely known, sued Zuckerberg for diluting his shares and essentially forcing him out of the company. We see the strained relationship between the two friends, even as memories of their high-fives and wide smiles run as counterpoints to this conflict. It’s well written, and for the first time we sympathize with Zuckerberg.

In The Social Network, there is no hero to cheer for; in fact, Zuckerberg comes off as a prick, both in his interactions with women and colleagues. He seems distant, cold even. As media reports and The Facebook Effect have found, that’s close to reality — Zuckerberg pauses before answering, choosing his word carefully, and he sometimes looks like he’s not listening to you. Eisenberg captures those looks perfectly.

Justin Timberlake plays Sean Parker, the high-flying Napster co-founder who joins Facebook to offer advice and take hold of 6 percent of the company. Tension boils between Parker and Saverin, one of the first main conflicts in the film. Too bad The Social Network exaggerates Parker’s Playboy lifestyle, including a contentious party scene where some cocaine is sniffed off a girl’s cleavage. Really, Sorkin, are you sure that happened? Or does it make for a great scene between dialogue about servers and venture capital financing? 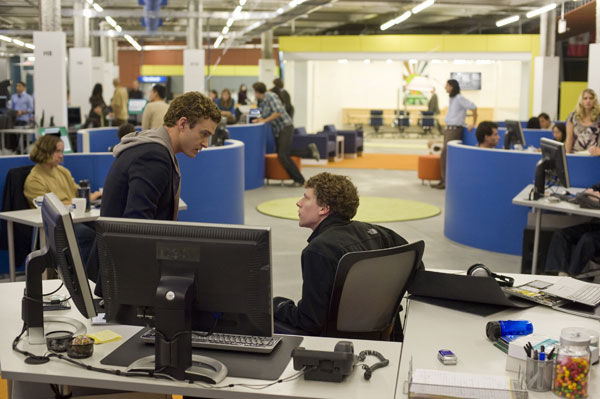 If you come to terms with The Social Network being fictional at times, then you’ll thoroughly enjoy many moments in the film. Some funny lines pop up unexpectedly, mainly uttered stone-faced by Eisenberg or the hulking Winklevoss twins. There’s more laughter than you’d expect from a movie about a website (and not a “poke” joke among them).

There are many layers to this biopic of Facebook: it’s a story of male vanity, with Facebook founders often saying how they want to conquer the world with this simple idea of connecting friends to each other; we see bravado and jealousy simmer from the Winklevoss twins, who strike to stomp on Zuckerberg’s face. Parker is egotistical to the point of annoying, but he’s a fine contrast to Zuckerberg’s shyness.

Director David Fincher is comfortable with films about outsiders. Look at Fight Club and The Curious Case of Benjamin Button. Here, he also gives a story about guys who just want to fit it, highlighted even more emphatically during those hallowed halls of Harvard. Sorkin (The West Wing) gives us one of his sharpest scripts, filled with salty humour, intriguing details about Facebook features (how did Zuck get the idea for relationship statuses?) and character depth. Zuckerberg is a complicated guy, whose story is still being written, but The Social Network provides us with a necessary probe into a man who controls so much of the information from 555 million people across the world. This is not only an entertaining film; it’s an important film for Facebook fans, Web executives and anyone curious how a single idea can change everyone’s lives.