On a two-week run in Toronto’s Canon Theatre, Fela! will get you dancing. Not only due to the fantastic live music and skilled dancers on stage, but the audience is told to dance and is even instructed on the Afrobeat moves midway through the first half.

That’s one of the reasons why Fela! will have you smiling through the first hour. You can’t help but shake your booty when the Fela Kuti songs began to power through the theatre. The music is top-notch, which only makes sense once you see who’s behind the Broadway hit – rapper Jay-Z and actor/rapper Will Smith. No shortage of money must’ve been thrown at this show to make sure they enlisted A-list dancers and singers.

The standout performer is undoubtedly Sahr Ngaujah, who plays the demanding role of Fela Kuti, living in Lagos, Nigeria. He boasts a stellar voice and smooth dance moves, miming the excellent saxophone riffs courtesy of musician Morgan Price. It’s as if the on-stage musicians are channeling Kuti and his bandmates directly. 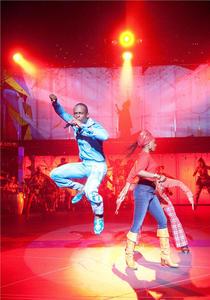 Ngaujah helps lead the the rowdy energy in Fela! The audience gets pulled into Fela’s story and his love for funk and Afrobeat, as he traces his musical influences, from Frank Sinatra to James Brown. For Kuti fans, some interesting new nuggets of info may be welcome surprises.

In the second half, Fela talks more about the Nigerian government’s displeasure with his “hippie” fans and political aspirations. Fela wants to run for president but how will Nigeria respond?

What’s missing in the second half is a conflict for the audience to rally around. It’s more of the same in the second half, even though the tune Zombie stands out as one of best choreographed tunes of the show. Still, where’s the tension? Sure, we hear about police raiding Kuti’s compound but it’s too little too late. As fun a show as Fela! is, I feel like the writers could’ve stirred the pot earlier. Why don’t Kuti’s enemies get any stage time?

The ending is aimless and disjointed, and could’ve used a tighter resolution. Confusion bogs down a lengthy dream sequence, but that’s soon forgotten when Melanie Marshall (playing Kuti’s mother) belts out operatic tunes worthy of the COC.

Fela! is one of those shows you remember for the energy, crowd participation and excellent music. But if you’re looking for a story with wild twists and unexpected turns, you won’t find it here.