She had just seen Paul McCartney the night before in concert at the new Golden 1 Center. “I have seen the documentary three times now, including the premiere in London. But I want to experience what the audio description is like for myself,” said Michele Spitz of A Woman of Her Word. A voice-narrative specialist, Spitz provided the audio description for the U.S. version of the documentary that officially began making its way across the country at selected cities last month.

It is now playing at the Sundance Kabuki and last night Oct. 4, Spitz was eager to hear for herself what the narrative she made was like. “Putting together the audio description is work. It seems easy, but it is all about timing and maintaining the flow of the movie and collaborating with a tech crew. This movie was not easy because of all the video clips, news segments and interviews.”
Spitz has been dedicated to providing descriptive audio to ensure the visually handicapped have the opportunity to enjoy film, especially important films like this one.
Both Spitz and this reporter were born in the early 1960s, just as the ‘phenomenon’ of The Beatles was picking up speed. Still, for me, the experience of the Ron Howard film was powerful. One thing that struck me most was how emotional all of the audiences were in the clips, especially, the audience at Shea Stadium.

It is hard to fathom that type of frenzy today. And when looking at the context of the times, it still is remarkable. Here are some important aspects to The Beatles that I forgotten and frankly did not know because as I say, I was born just as they were hitting their stride. 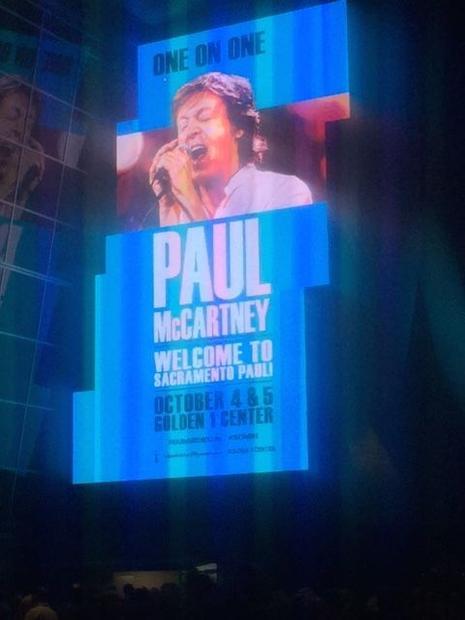 Paul McCartney as he appeared on stage in Sacramento this past Oct. 3 and 4.
Courtesy of Michele Spitz and A Woman Of Her Word descriptive audio and narrative services

The Beatles appealed to many young people from all walks of life. They were among the first to have consecutive hit after hit on not just the American song charts but others world-wide. When they played to sold out arenas and stadiums, they insisted their audiences not be segregated. And, when John Lennon made his casual remark about The Beatles being more popular than Jesus Christ, he did apologize.

In our current social climate of political correctness and social justice, the fact that The Beatles wanted everyone to enjoy their music was really ahead of the curve. Look at the times, the early ’60s, it was a tumult of conflict in American Society. In fact if you listen carefully, among the very first songs The Beatles recorded were ones that were from the Motown sound, like The Isley Brothers “Twist and Shout” and Little Richard’s “Long Tall Sally.” Author and professional Beatles scholar Aaron Krerowicz notes on his blog, “Certainly the biggest appeal of Little Richard on a young Paul McCartney (at the time) was his voice, which McCartney could imitate reasonable well.”

The Beatles emulated the music they heard from America going up because it was like nothing they had heard or experienced before. And, unlike Elvis who also “borrowed” from the African-American music sound, The Beatles would write and perform their own music, not just someone else’s.

Perhaps one of the reasons why The Beatles’ music made such an impact was because they were original, especially their songwriting. Yet Some historians are quick to point out that part of it was the timing. The Babyboomers of the Post-WWII era were coming of age and their energy and hunger for new experiences is what fueled “Beatlemania.” Still, other historians point out that for America especially, the arrival of The Beatles was like an intoxicating remedy to a nation still grieving over the assignation of a beloved President J.F. Kennedy. Screaming teens, became the routine at each concert and appearance. It got to the point that they were so loud at every venue, neither band member could hear well enough to ensure the quality of the singing. 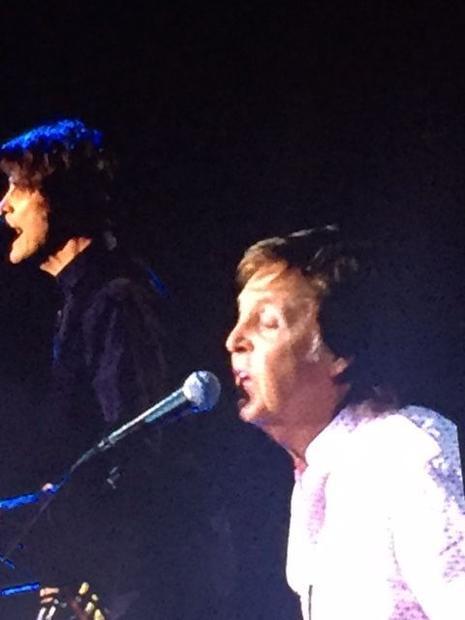 Paul McCartney sings one of his well-known songs from the 1970s after The Beatles broke up and he formed the band “Wings.” The influence and songwriting power of The Beatles continued for decades even after “Beatlemania” had faded.
Courtesy of Michele Spitz and A Woman Of Her Word descriptive audio and narrative services

The other extraordinary aspect to the film is that it is a time-capsule glimpse of recent history. Watching the film, you see the “four lads from Liverpool” transform and in a very short span of time; much like the nation did during the 1960s.
And as Krerowicz said, “I’ve never liked the term ‘ahead of their time’ because it can mean just about anything. On one hand, yes, the Beatles were innovators and pushed the envelope like no other contemporary did. But at the same time, he said, they’re so defining of The Sixties. So it’s a strange paradox how they were of their time and ahead of their time simultaneously.”

During their touring years from 1962 to 1966, as depicted in the film from actual archival footage, the lads transform from working class boys who made it big, to formidable music talents. As songwriting and performing powerhouses they collectively and later individually, influenced the music-scene like no other. It is an era that was a major part of American popular culture and now it is gone. There have been other music and cultural waves since then. But nothing as formidable and as overwhelming-worldwide as The Beatles.

The screaming and excitement was one thing to “Beatlemania.” But the sobbing and mass-hysteria was another. It is even said in the film that each of The Beatles felt that their music was not even heard. It wasn’t about the music anymore. it was the hysteria. And it was because of that hysteria that made performing unbearable.

They stopped concert performing and focused on recording. And, while it is clear to see they were changing and growing, what is touching is the fact that they appreciated each other and got along very well. They were able to remain friends amid the frenzy of fame and popularity, when other bands disintegrated. They officially broke up in 1970, but their legacy and influence continued to this day.

Which, as Spitz explained, “is evident because at the One on One concert Paul gave in Sacramento that I just saw, people were still enthralled by him. And, I mean in tears, just like you see in the documentary,” she said.

The film concludes showing at the Kabuki this week. See Sundance Kabuki web page for details. Or visit the website for Eight Days A Week.