Roger McNamee, Peter Sears, Barry Sless and John Molo are Moonalice. And on April 20 with the accompaniment of the Doobie Decibel System Band (Jason Crosby, Roger McNamee, Peter Sears, Dan “Lebo” Lebowitz & Jay Lane) they will be appearing at Slim’s in San Francisco.
For almost 10 years Moonalice has been on tour making a name and a defining presence in contemporary rock music circles. Yet, as experienced musicians they have been a part of the rock music scene for decades. They have been associated and worked with many legendary groups and stars such as Jefferson Starship, Phil Lesh, Hot Tuna, Bruce Hornsby & The Range, John Fogerty, David Nelson Band and Rod Stewart.

Their love of the music and the experience it generates is what keeps them going, even when life on the road is stressful. And, like any creative and powerful endeavor, the dynamics they share is what pulls the audience to them. While between them their individual careers span the history of rock since the 1970’s, the music they make is relevant to today.
When one of their songs, “It’s 4:20 Somewhere” had been downloaded over 5 million times, the Rock and Roll Hall of Fame in 2012 took notice. High tech and social media has been a great help to Moonalice, as they continue to break new ground, and venture onward to new creative horizons. 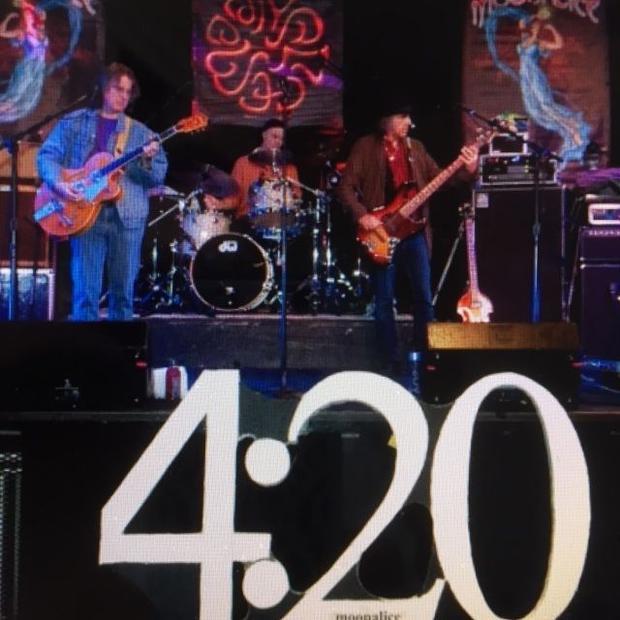 Moonalice’s annual “gathering of the tribe” for the 4/20 concert has become a rock music tradition and a hallmark of the band’s unique following.
Bob Minkin, courtesy of Moonalice

Band member and part of the DDS band and duo, Roger McNamee took some time to chat with this reporter. He explained that while Moonlace may seem like a “Heritage or Tribute” band, it is neither of those. “A band that has been around a long time and is still performing, that’s a heritage band, he said. A band that strives to replicate the sound and songs of a band that is a tribute band. We are a psychedelic roots-rock band of seasoned musicians mixing a variety of genres with unexpected musical improvisations.”

NcNamee noted “our history is unknown to most people.” And, that Moonlace all began when T Bone Burnett approached him and others and “wanted a new band not a heritage act,” he said. What initially was simply a project to make an album of songs, then turned into a force of music all its own. “T Bone Burnett is phenomenal, said McNamee. T Bone believes in traditional American music” (that includes Rock and Roll). McNamee mentioned a few of Burnett’s previous projects. The list of what T Bone Burnett has accomplished over the years is extensive. Yet, what intrigued McNamee and the other band members was the emphasis on making new music, not simply repeating the same material over and over. 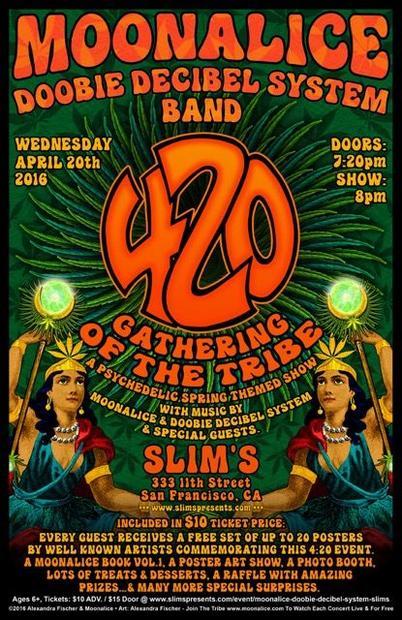 “Psychedelic lends itself to what is happening today, said McNamee, in terms of technology and social media. Even back in the 1960s and 70s, psychedelic was truly ‘a multimedia event’ even before that term was being used.” The light shows, the art work and as far as social networking, “back in those days when psychedelic was new and emerging, it was mostly all word of mouth. That was the original social media/networking thing,” he said.
And of course, the posters. The posters got distributed and that too reached out and beckoned people to the concerts. Naturally, as McNamee reflected back over the years, he admitted the technology of today has dramatically changed the music business forever. “There are musicians and bands we know and worked with who are no longer in the business because all has changed.” But on the positive side, having the ability to post live video and sound clips of their music has helped bring Moonalice recognition (via The Rock and Roll Hall of Fame) and audiences.

“With the new technology said McNamee, people can take a peak at the music – our previous performances and decide whether or not they want to come see a show. That way they will know what they are paying for.” Yet he emphasized that what they will get is a complete experience. The live music, the lights, the art work, and the stepping into new horizons of music-expression. “Kind of like a stew, he said, it is experimental, it is meant to be fun, and with the audience being there it all ties together.”

McNamee, noted that Moonalice did not set out to compete. He believes performing live and having the ability to use the technology in various ways is “that wonderful leverage we have.” He said frankly, “we are not kids anymore. And yes, we members have been around a long time.” But as McNamee pointed out, “it is all about the music and we love what we are doing and the audiences that come to see us love it.”

“I am so blessed, (our band is so blessed) he said to be able to do what I love and to share it with the audience and make many, many people happy. Moonalice’s annual 4/20 concert “420 gathering of the tribe” event will be this Wednesday at Slim’s in San Francisco. For more info visit the Moonalice website or the band’s Facebook and Twitter pages.

Videos in HD of every show are available on YouTube and every poster (each with a unique legend) can be viewed at the Moonalice web site’s poster page.