Mojang announced the figure today. To date, it has sold a grand total of 106,859,714 copies of Minecraft across all its versions. The game is available on PC, Mac and Linux, consoles and smartphones as Minecraft Pocket Edition.
There are now enough people playing Minecraft that if they formed their own country it would be the twelfth-largest in the world. People have bought Minecraft from almost every region on the planet. Mojang has even sold four copies to people in Antarctica.
“We’d like to offer our heartfelt thanks to every one of you who’s bought Minecraft over the past few years, no matter which platform you play on,” Mojang said in a blog post. “We’re constantly in awe of our community and the amazing things you achieve together. You really are the best.” 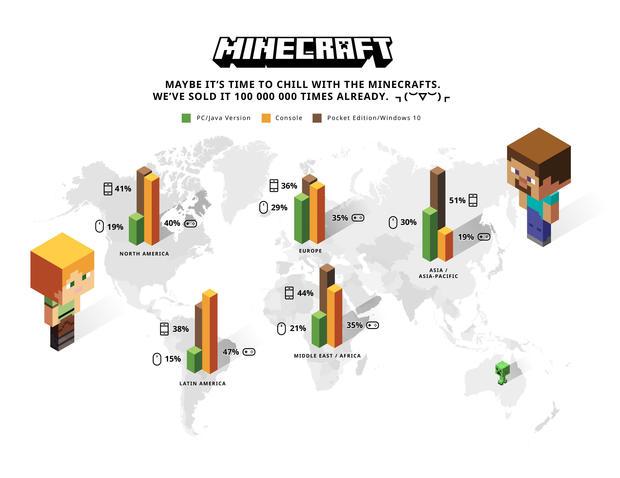 Minecraft was created by Swedish programmer Markus Persson, known as Notch. It quickly attracted attention for its procedurally generated blocky world, giving every player their own unique landscape to roam around in.
Its open world allows players to build and explore at will. There’s a survival mode that involves fighting hostile monsters and a peaceful creative experience that lets you build without restrictions. Players can create using a variety of materials and block types, incorporating complex logic and computing through Minecraft’s Redstone blocks.
In 2014, Mojang was bought by Microsoft as Persson struggled to handle his success. The game has continued to receive regular updates throughout its life and is still in active development on all of its supported platforms.
Despite being nearly five years old, the game also remains popular with fans. Mojang said it has sold an average of 53,000 copies every day in 2016. Forty million people continue to play Minecraft every month, making it one of the largest gaming communities.
Minecraft is now the second biggest game ever. The title is still held by Tetris, the 1984 tile-matching puzzle game developed by Russian programmer Alexey Pajitnov. Tetris is believed to have sold over 495 million copies in all its available forms, including officially licensed smartphone remakes.
Minecraft still has a few copies to sell before it catches up with Tetris. Considering the latter is now over 30 years old, Minecraft isn’t doing too badly for its age though. Mojang has previously committed to continuing to support Minecraft with free updates. Version 1.9 was released earlier this year with a variety of new features and improvements focused on combat.
New owner Microsoft is working to make Minecraft even more broadly available. It has developed versions for the Oculus Rift and Microsoft HoloLens, virtual and augmented reality headsets respectively, and brought the game to the Windows Store in Windows 10.

In this article:Gaming, microsoft, minecraft, Mojang