On May 1, as part of National Foster Care Month, Lilley is partnering with the foundation Project Orphans to establish a neighborhood here in the U.S. to give orphans and children in foster care safe and loving homes, with a focus on permanency and adoption. To raise awareness and funds for Project Orphans, she launched the #VoicesThatGive contest. “Project Orphans is a wonderful charity that helps orphans, children, families, and vulnerable women,” she said.

She is offering a walk-on role in one of her upcoming Hallmark Channel movies, as well as a tour of the set and a taping of Home & Family. “I am so happy to be a part of the Hallmark Channel and the fact that they lent their name and the option of being in a film to help foster kids is really beyond anything I could have asked for. I think a lot of people are going to love that,” she said.

For the grand prize of the #VoicesThatGive contest, they are offering $10,000, national media coverage, her album, and subsequently the category-specific prizes. For more information, check out the following #VoicesThatGive website. 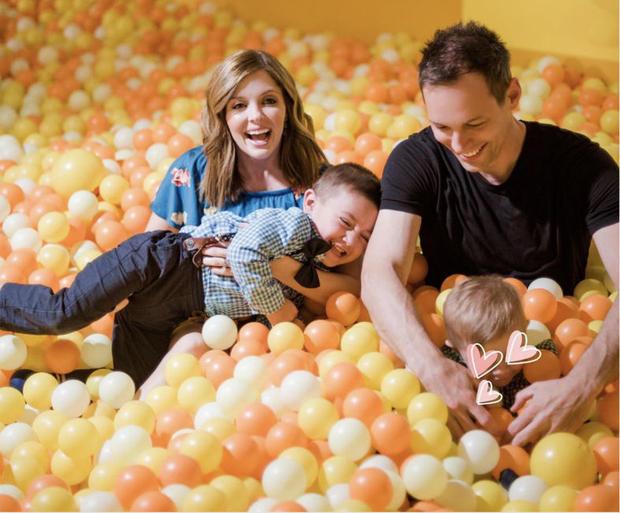 Jen Lilley with her family
Photo Courtesy of Jen Lilley

In addition, Lilley launched her new weekly podcast “Fostering Hope,” which aims to help normalize and support adoptive families, as well as foster ethical practices, and champion for safe, loving families for children in need. “Oh my Gosh. It’s the greatest joy,” she admitted. “The podcast has been incredible and amazing.”

Aside from acting, she is also a singer-songwriter that will release her debut album, Lilley. In an effort to support the upcoming album, she is launching a contest where she is inviting creatives from all backgrounds to enter. She shared that she started recording her album three years ago. “I grew up listening to Motown music: The Ronettes, The Temptations and The Supremes,” she said. “There is something about that genre that I find so comforting and happy.”

“I loved paying it forward, and I love conscious consumerism,” she said. “I decided to take all my income in music, since I’m already an actress, and I decided to give it to children in need. We decided to release an album for charity and we are doing it. The album is being released by the #VoicesThatGive contest.”

Regarding the #VoicesThatGive contest, she said, “People are going to enter in May, which is National Foster Awareness Care Month, and then in June, the voting round starts. They will go to social media, and they can vote. The first vote is free but extra votes are a dollar each and they can purchase voting bundles. If they donate $10, they get my album, and 100 percent of my profits go toward Project Orphans USA.”

She continued, “If they donate $25, they get an exclusive autographed copy of my album. If they donate $100 or more, they get my album autographed and a T-shirt to help them win. It’s a really positive way to support artists to launch an album and raise money to help foster kids. I think it’s really fun.”

On October 10, Lilley will be a part of the Spectrum fan event entitled “Dishin’ Days,” which will take place from 5 p.m. to 9 p.m. at the Los Angeles Burbank Marriott Airport Hotel in Burbank. She will be joined by such actors as Eric Martsolf, Stacy Haiduk, Billy Flynn, Kate Mansi, Paul Telfer, Brock Kelly, and Scott Shilstone. “That is exciting. It is always nice for me to interact with the fans. I am looking forward to this fan event most of all because we have been social distancing and I just really love people. I love hugging the fans and I love how it helps charity as well.”

“I can’t thank the fans enough for their support. I honestly, genuinely feel like the luckiest girl in the world. My fans are the kindest, passionate, and the most generous people that you could ever have the joy of getting acquainted with. The fans are incredible, and I love them so much,” she said.

She also spoke highly about Brad Everett Young’s nonprofit organization, Dream Loud. “I love Brad Everett Young,” she exclaimed. “He is my favorite photographer and he knows it. I am so comfortable around him, and he has become such a dear friend. He has this unique way of capturing exactly who you are on camera but he can make you look beautiful even when you are being goofy. I have no idea how he does it,” she said.

“Dream Loud is such a wonderful campaign because it’s pro-artist. I do believe that everybody is creative. We are all artists,” she said. “With Dream Loud, Brad Everett Young is spreading the message of dreaming loud, and dreaming big. He is incredible. Go for it.”

For young and aspiring entertainers, she said, “I really believe that everyone is created on purpose and for a purpose with unique talents and gifts. That’s a core belief of mine. Dream as big as you can, and don’t take ‘no’ for an answer. Work hard and be smart. Make sure that you are wanting to pursue the arts because you love it and not because you want to be famous. Being famous will leave you empty but storytelling is so powerful and it impacts so many people in such a positive way. You should use your talent to evoke emotions in other people and help them experience catharsis whether it is through laughter or tears. That way, you can use your platform for good.”

On the title of the current chapter of her life, Lilley said, “It’s go time.”

When asked about her alternate career choices, she responded, “I would be a lawyer or a criminal analyst.”

Lilley defined the word success as “Raising kind children who grow up to be responsible adults that carry on the torch of changing the world for better.”