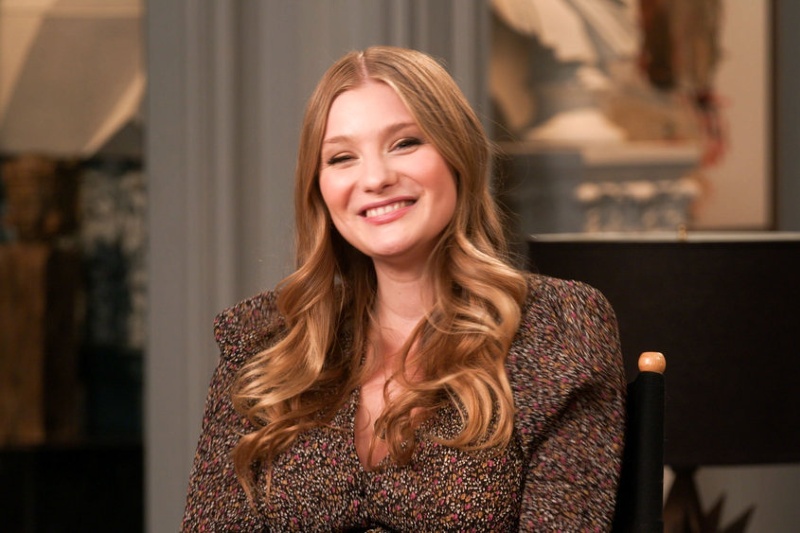 Lindsay Arnold, who plays Allie Horton on the NBC daytime drama “Days of Our Lives,” chatted about her 2022 Daytime Emmy nomination for “Outstanding Younger Performer in a Drama Series.”

On scoring an Emmy nod, Arnold remarked, “It felt really great. I was really excited. It always feels nice to have your work recognized by your peers in that way. I was excited and relieved because it was something that I really wanted this year so it definitely felt good to get it.”

In her Emmy reel, she revealed that she submitted her scenes with Deidre Hall (who plays the iconic Marlena Evans). “It was the scenes where Allie is under hypnosis and remembers the true events of the night of her sexual assault, so it involved her reliving that night, and coming to terms with finally learning what happened to her,” she said.

She is drawn to playing Allie due to “all of the different family dynamics in her life.” “I love playing somebody with a twin since in real life I don’t have a twin so that has been fun to explore,” she said. “I love exploring her mother and daughter relationship with Sami. That relationship has been fun to unravel, especially when you have two strong personalities.”

Arnold had great words about working with co-stars Mike Manning (Charlie Dale) and Carson Boatman (her twin brother Johnny DiMera). “I love Mike Manning so much,” she admitted. “It is always really fun to work with him. It is interesting because all of our scenes have been pretty intense and dealing with an extremely traumatic experience. In between takes, Mike and I are always laughing up until the last minute before we both get into it. Mike is so easy to work with, he is so present, and he gives you everything that you need. Mike is so sweet and he is one of my favorite people to work with and I couldn’t have asked for someone better to go through that journey and all of those intense scenes with,” Arnold said.

‘A Very Salem Christmas’ on Peacock

Arnold loved being a part of the holiday special “A Very Salem Christmas” on Peacock. “That was so much fun, I had such a good time. In general, it was a really fun storyline,” she said.

“It gave me the chance to work with Carson, Raven Bowens, and Lucas Adams, and we all have fun when we work together. It was weird seeing Lucas and Raven as a couple since obviously, we are not used to that, so we had a lot of fun exploring that different dynamic. It was really good to see everyone,” she added.

When asked how she handles being dialogue-heavy, Arnold said, “Luckily, I have picked it up really quickly. Once you get used to doing it, your brain catches up so now it is definitely easier to memorize. When I first started, I used to record the other lines and I would run my dialogue with myself and I would run it until I had it perfectly. It has gotten easier over time, especially now that I have been on the show longer.”

For young and aspiring actors, Arnold said, “Don’t take anything too personally when it comes to the other aspects of the industry. Most of the time, if you don’t get an audition or a role that you really want, it doesn’t have anything to do with you. Keep focusing on what you are doing, and finding love and passion in what you are doing.”

On being an actress in the digital age, Arnold said, “I think it’s really exciting. There are so many more opportunities. There are constantly new shows and new content being created, which is great for all of us. It’s cool being a part of that with Peacock. So far, I have really enjoyed it.”

She enjoyed being a part of the Star Image Entertainment Zoom events, which benefit Cedars CanSupport, a Canadian charity that helps cancer patients and their families. “Those were wonderful. I loved what we were doing them for. It is always fun to meet people. I haven’t had a chance to do a lot of one-on-one of that due to COVID. I love the virtual aspect of it because I don’t get to do that a lot,” she said.

If she weren’t in the entertainment world, she shared that she would still be doing something creative. “I would probably be an interior designer,” she said.

On the title of the current chapter of her life, Arnold said, “Transition.” “This is my transitional chapter where I am going through some changes and I am transitioning to the next phase of my life,” she said.

Arnold defined the word success as “doing something that she feels very fulfilled by,” as well as “creatively and emotionally fulfilled.”

For her fans, Arnold concluded, “Thank you, honestly, I feel so supported and really welcomed into the show since I joined. Thanks for helping me make this transition in this whole new world that has been around for so many years. Thank you for making me feel accepted and welcome into it.”