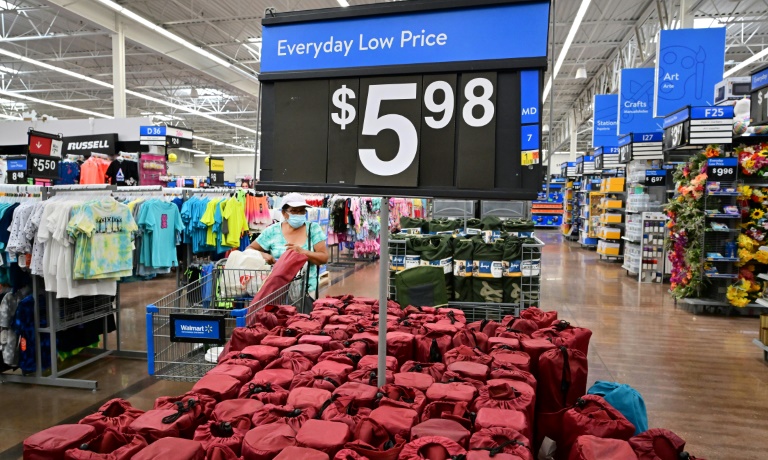 A key US inflation measure showed price increases held steady in the 12 months ended in May, while consumer spending growth slowed sharply, a good sign in the battle against soaring prices.

The trend could offer comfort to consumers and central bankers alike, as a sign the Fed’s aggressive interest rate strategy is starting to have an impact to quell the fastest surge in inflation in more than 40 years.

The index jumped 0.6 percent compared to April, much faster than in the prior month, but slightly below what economists had projected.

But spending edged up just 0.2 percent, less than half the increase in April and part of a steady downward drift as consumers pull back amid surging prices.

Buoyed by a stockpile of savings, helped by massive government aid, consumers have been the lynchpin in the rapid US recovery from the pandemic downturn.

But strong demand clashed with global supply chain snarls and the world’s largest economy has been battered for months by a cresting inflation wave, made more painful by the surge in energy prices sparked by the Russian invasion of Ukraine in late February.

Excluding volatile food and energy prices, PCE rose 0.3 percent in the month, the same as in April, and slowed slightly to 4.7 percent over the past year, the report said.

The PCE price index is the Federal Reserve’s preferred inflation gauge, as it reflects consumers’ actual spending, including shifts to lower cost items, unlike the more well-known consumer price index, which jumped 8.6 percent in May.

PCE also gives less weight to things like rent, vehicles and airline fares, which have contributed to the blistering pace of the CPI rise.

The Fed early this month announced the biggest hike in the benchmark lending rate in nearly 30 years, a three-quarter point increase that was the third step in its counteroffensive against rising inflation, which aims to cool demand.

Policymakers are watching the spending and inflation data closely and have signaled there is a good chance of another similar increase in late July, followed by more big steps in coming months.

Ian Shepherdson, chief economist of Pantheon Macroeconomics, noted that the three-month average annual increase fell to the slowest pace since November, and “a sharp easing from the 5.7 percent peak in February.”

“A combination of slower wage gains, lower margin inflation, and the stronger dollar is beginning to drive a clear slowdown in core inflation,” he said. But “It has much further to go.

The signs of consumers pulling back will weigh on second quarter GDP growth, after the Commerce Department revised first-quarter consumer spending sharply lower, cutting it to 1.8 percent from 3.1 percent, as the economy contracted 1.6 percent.

The key driver of the slower consumption growth in May was the sharp drop in spending on big-ticket manufactured items, known as durable goods, which fell 3.2 percent in the month, the report said.

Economists note that reflects a pull back on vehicle sales.

Spending on services rose 0.7 percent in the month, the same as in April.

Rubeela Farooqi of High Frequency Economics said the Fed will stick to its efforts to tame prices.

“With the threat from durable inflation in focus, these data are not likely to change the rate trajectory, which remains firmly upward,” she said in an analysis.

In this article:Economy, Income, indicator, Inflation, Personal, US