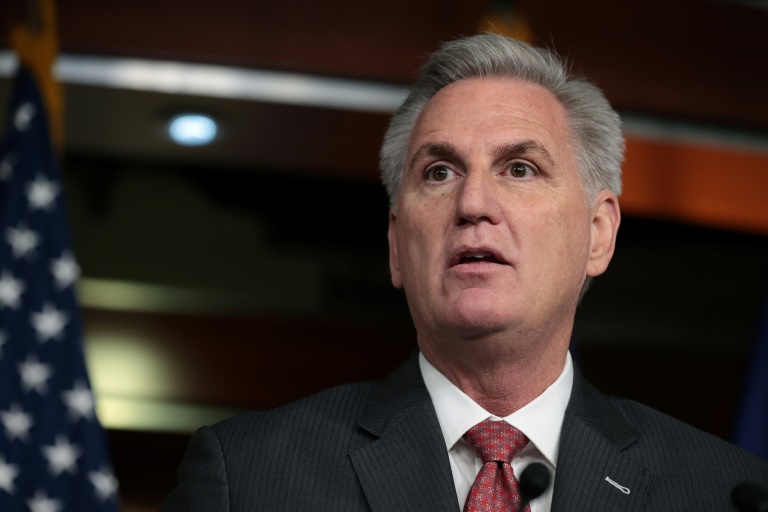 The leader of the minority Republicans in the US House frustrated Democratic efforts to pass President Joe Biden’s historic package of social welfare reforms Friday with an hours-long, disjointed tirade that drew mockery and angry boos from the opposite benches.

Kevin McCarthy was supposed to talk for one minute ahead of a Thursday evening vote in the lower chamber of Congress to advance the $1.8 trillion Build Back Better Act as he took the floor just after 8.30 pm (0130 GMT).

But he was still going strong at 1.30 am after a rant tackling everything from Biden’s spending to the Afghanistan withdrawal, travel to Europe, Elon Musk, Abraham Lincoln, the Hallmark Channel, the Nobel Peace Prize and the artwork hanging in his office.

Unlike the Senate, the House doesn’t have a “filibuster” that allows the minority to scupper legislation by talking for hours, and the vote was merely postponed until 8:00 am.

“I don’t know if they think because they left I’m going to stop. I’m not,” McCarthy said as Democrats received word that his tactics had worked and began filing out of the chamber.

The Republican was first laughed at and then angrily jeered as the minutes turned into hours, with his theatrics widely seen as his audition to be the next speaker in 2022 if the House flips to the Republicans.

Current House Speaker Nancy Pelosi’s office released a statement as McCarthy went into his fourth hour, accusing him of “losing the plot.”

“As he hopefully approaches the end, we’re all left wondering: does Kevin McCarthy know where he is right now?”

Democrats had started the evening in a serious mood, determined to approve Biden’s giant social welfare and climate bill, the centerpiece of his $3 trillion domestic agenda.

The debate came three days after the president signed off on the first part of his economic blueprint, a sweeping upgrade of the country’s crumbling infrastructure.

The legislation is still likely to advance from the House, where Democrats have a majority of three, with only one of their lawmakers indicating he would be defecting to vote no.

It would then go to the Senate — where it is likely to get an even bumpier ride, with the Democrats’ deficit hawks jittery about historic spending as gas and food prices spiral — before it gets a final rubber stamp back in the House, likely in January.

“Unemployment claims are down nearly 70 percent since I took office. Retail sales are up,” Biden said in a statement ahead of the debate.

“I’ve signed a historic infrastructure law and we have the Build Back Better Act on its way. Things are looking up.”

Build Back Better would provide millions of jobs, according to the White House, although Republicans have characterized it as an example of wildly out-of-control Democratic spending.

But it will likely be watered down in the upper chamber, where Democrats have the narrowest of majorities and moderates are voicing concerns over Biden’s spending plans.

Annual inflation jumped to 6.2 percent last month, giving Republicans another cudgel to bash Biden with as they bid to retake both chambers of Congress in next year’s midterm elections.

The Senate has been locked in a 50-50 split for one of the longest periods in its history and, with no votes to spare, every Democrat effectively has a veto on any bill as long as Republicans stick together.

Senate progressives are pushing for a national paid family leave program and a bigger expansion of health care benefits, but the latest inflation data could harm those efforts.

West Virginia’s Senator Joe Manchin, the biggest Democratic obstacle to getting the legislation to Biden’s desk, has indicated he is opposed to family leave, one of the most popular planks of the package.

The fiscal conservative has argued in any case that the Democrats should pump the brakes on spending until inflation is brought under control.

In this article:Democrats, Joe Biden, Politics, US Republicans, USA, Washington