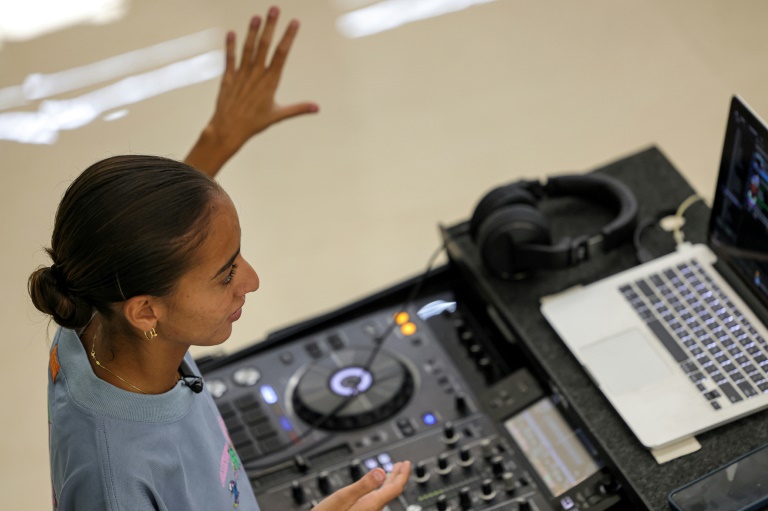 Standing behind her control tower with headphones around her neck, Saudi DJ Leen Naif segues smoothly between pop hits and club tracks for a crowd of business school graduates noshing on sushi.

The subdued scene is a far cry from the high-profile stages –- a Formula 1 Grand Prix in Jeddah, Expo 2020 in Dubai -– that have helped the 26-year-old, known as DJ Leen, make a name for herself on the Saudi music circuit.

Yet it captures an important milestone: Women DJs, an unthinkable phenomenon just a few years ago in the traditionally ultraconservative kingdom, are becoming a relatively common sight in its main cities.

These days they turn few heads as, gig after gig, they go about making a living from what once was merely a pastime.

“A lot of female DJs have been coming up,” Naif told AFP, adding that this has, over time, made audiences “more comfortable” seeing them on stage.

“It’s easier now than it has been.”

The possibility that DJs would be welcomed at public events, let alone that many would be women, is something “we didn’t expect” until recently, said Mohammed Nassar, a Saudi DJ known as Vinyl Mode.

Before “it was just a hobby to express themselves in their bedrooms”.

“Now we have platforms, and you know they could even have careers. So it’s really amazing.”

Naif was first introduced to electronic music as a teenager by one of her uncles, and she almost instantly started wondering whether DJ’ing was a viable job.

While her friends dreamed of careers as doctors and teachers, she knew she didn’t have the patience for the schooling those paths required.

“I’m a work person, not a studying person,” she said.

Unlike other women DJs, she had the immediate support of her parents and siblings.

Other Saudis, however, required some winning over.

Several years ago, a man came up to her mid-performance, declaring she was “not allowed” and demanding “Why are you doing this?”

His complaints got Naif’s set shut down, but she doubts the scene would play out the same way today.

“Now I bet that same guy, if he sees me, he’s going to stand first in line just to watch.”

Naif has benefited from official attempts to trumpet Saudi Arabia’s new entertainment-friendly image, which is often criticised by human rights groups as a distraction from abuses.

Her nomination to play at the Saudi pavilion of Expo Dubai 2020 gave her an international audience for the first time.

Lujain Albishi, who performs under the name “Biirdperson”, started experimenting on DJ decks during the pandemic.

Her family disapproved when she started talking about DJ’ing professionally, preferring she strive to become a doctor.

She stuck with it anyway, developing her skills at private parties.

Her big break came last year when she was invited to perform at MDLBeast Soundstorm, a festival in the Saudi capital Riyadh that drew more than 700,000 revellers for performances including a set by superstar French DJ David Guetta.

The experience left her “really proud”.

“My family came to Soundstorm, saw me on stage. They were dancing, they were happy,” she said.

Both Naif and Albishi say they believe women DJs will remain fixtures in the kingdom, though their reasoning varies.

For Naif, women DJs succeed because they are better than men at “reading people” and playing what they want to hear.

Albishi, for her part, thinks there is no difference between men and women once they put their headphones on, and that’s why women DJs belong.

“My music is not for females or for males,” she said. “It’s for music-lovers.”

In this article:Music, Rights, Saudi