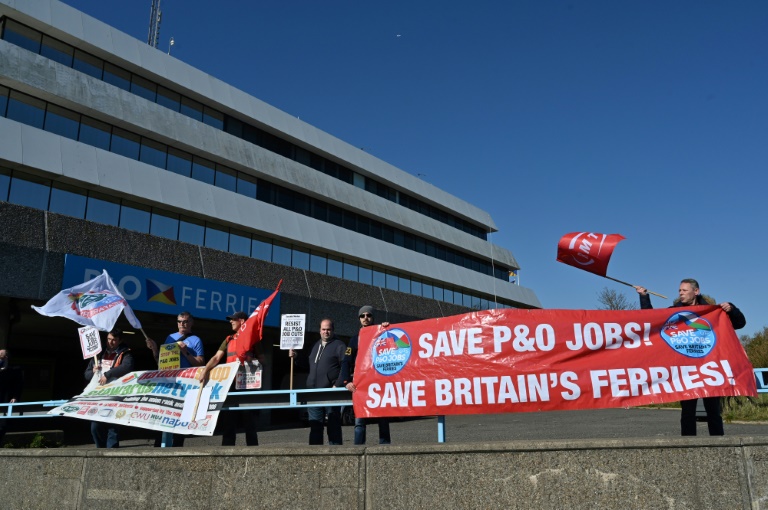 Protests were held on Friday in the English port cities of Dover, Hull and Liverpool, a day after the sudden dismissal of 800 employees by shipping operator P&amp;O Ferries.

On the south coast in Dover, angry demonstrators chanted “save our seafarers,” “stop the dismantling of jobs at P&amp;O” and “resist all job cuts”.

P&amp;O Ferries, which is owned by Dubai’s DP World, prompted outcry from trade unions and politicians on Thursday when the loss-making group axed 800 jobs with immediate effect to save cash, citing its unviable finances.

Unions slammed the decision and revealed that P&amp;O had encouraged staff to re-apply for agency work under what they described as a “fire and rehire” policy.

Images have since emerged of security guards scaling P&amp;O ships to remove staff who were outraged over the dismissals.

Transport Minister Grant Shapps said he was “shocked and dismayed by the insensitive and brutal treatment” of P&amp;O’s employees who were “dismissed via a pre-recorded Zoom video, with only 30 minutes of notice”.

“This is no way to treat employees in the 21st century” he said at a Conservative Party conference in Blackpool.

P&amp;O Ferries was badly hit over the last two years by the Covid pandemic, which ravaged the travel sector with multiple lockdowns and travel restrictions.

The group had already announced the dismissal of 1,100 employees in May 2020, in an effort to make the company viable and sustainable during the Covid crisis.

At the time P&amp;O received emergency funding from the government –- as well as receiving furlough support to help pay wages.

A Downing Street spokesperson said Friday that the government “takes this issue very seriously”, indicating that such company behaviour is only tolerable “in extreme circumstances” – provided that all other options, including negotiations, have failed.

“We don’t believe this was the case for P&amp;O staff, but we are looking into this very carefully before setting our final view,” the spokesperson added.

P&amp;O, which operates four routes serving Britain, France, Ireland and the Netherlands, has suspended passenger and freight ships since Thursday.