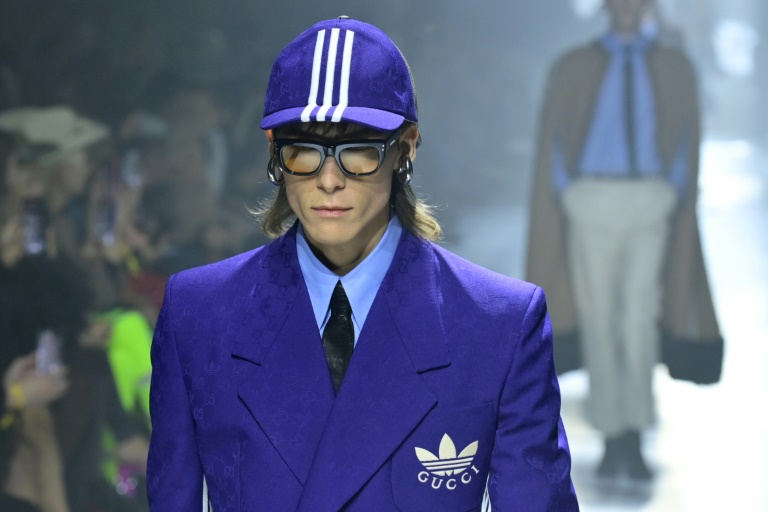 Why have one logo when you can have two? That was the in-your-face message at Gucci’s runway show Friday at Milan Fashion Week, where one could be excused for thinking they’d showed up at the wrong show.

Instead of Gucci’s decades-old world famous stripe logo in green and red, suddenly guests at the show saw Adidas’ three white stripes everywhere — on bodices, baseball caps and running down the length of the male and female models’ arms and thighs.

And if the hit-them-over-the-head-hard branding message still hadn’t sunk in, the name “Gucci” underneath Adidas’ trefoil logo was also added to the mix.

Newsflash: Gucci and Adidas are collaborating.

In a short statement, Adidas confirmed the joining of forces, saying the union “combines the heritage and the creative codes of both brands”.

The mutual admiration society between the luxury apparel and sneaker brands left some enthused, and others puzzled, with images of unlikely pairings (avocado and watermelon anyone?) and head scratching memes appearing on Twitter shortly after the show.

In the front row, there was Serena Williams and Rihanna, too — pregnant, in a black latex bra with a lavender fur and sparkly Cleopatra-style headdress.

But back to the collaboration.

A “Little House on the Prairie”-like dress with puffy sleeves and long ruffle skirt had stripes running down the bodice, sleeves, hem and high frilly collar. Plus the new Gucci trefoil at the waist.

A form-fitting superhero look with built-in blue corset and Gucci’s signature two-Gs fabric was — you guessed it — adorned with stripes.

On Instagram, Gucci designer Alessandro Michele said the clothes were “magical machines that can give birth to fairy tales of metamorphosis and re-enchantment.”

And maybe bring in some cash.

Of course, Michele’s favourite vintage mash-ups were still front and centre, whether patterned wool coats with furry collars, plaid suits, or other retro combinations in mustard, olive and other 1970’s shades.

Gucci sales have sharply risen in recent months, helped by the “House of Gucci” film starring Lady Gaga and the success of Michele’s recent collections.

The collaboration is not the brand’s first, having previously collaborated with couture label Balenciaga, and Microsoft XBox.

The “It” label put on a “Gucci Love Parade” show in November for the A-list in Hollywood, turning its Walk of Fame into the flashiest of catwalks with a collection replete with satin, spangles and ostrich feathers.