The Zapatista Army of National Liberation (EZLN) went public on January 1, 1994, the day the North American Free Trade Agreement (NAFTA) came into effect. They control a large amount of territory in Chiapas, the southernmost state of Mexico.

The Zapatistas’ main body is made up of mostly rural indigenous people, but it includes some supporters in urban areas and internationally. The group denies being related to any particular group in ideology, instead, they place the importance of indigenous Mayan beliefs more at the core of what they stand for.

They used their uprising as a platform to call the world’s attention to their movement to protest the signing of NAFTA, which the EZLN believed would increase the gap between rich and poor people in Chiapas—a prediction affirmed by subsequent developments.

#Zapatistas are back and preparing to confront #AMLO over Maya Train, other projects#Mexicopic.twitter.com/T0B725ntYq

Opposing AMLO and his projects
President Andrés Manuel López Obrador, while being described as a leftist – has never gained a lot of support with the rebel group from Chiapas. Once described as an army, the Zapatistas’ are now a political movement with a strong voice, and they are planning to raise that voice in opposition to the new president’s projects.

The Zapatistas’ met in October along with two indigenous groups to draft a text claiming the new federal government represented a threat to indigenous communities with the Cancún-Palenque train, its trans-Isthmus projects, the creation of a national guard, and expansion of the economic zones.

They also expressed their opposition to the government’s plan to plant a million hectares (2.47 million acres) with fruit and other trees in the south of the country, a project intended to create jobs and provide economic stability. The Zapatistas are also not happy with AMLO’s wanting to recruit 50,000 Mexican youth into the armed forces, either. 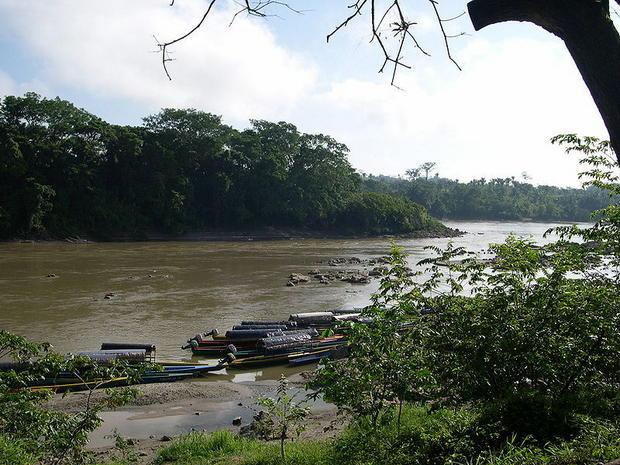 The Usumacinta River, at the border between Chiapas, Mexico (near side) and Guatemala (far side). Mayan groups disputed the control of the waters of this river in wars lasting more than two decades.
Jacobolus (CC BY-SA 2.0)
The recruitment effort is for a National Guard to contain violence linked to drug trafficking, something Lopez Obrador is hoping to seek through constitutional reform. However, human rights advocates strongly oppose this move, because it reinforces the military-centered anti-drug strategy that López Obrador criticized for years.

“We are going to fight, we are going to face them, we are not going to allow (López Obrador) to pass his destructive projects here,” said one leader, known only as Subcomandante Moisés.

Pedro Faro Navarro, the director of the human rights organization, Frayba Human Rights Center, says the group would not only try to bring together indigenous peoples, as it has in the past but anyone who opposes the country’s system of government.

The tip of the Iceberg
The Maya Train Project, launched on December 17, 2018, is probably the most ambitious, and, in turn, the most opposed project by the indigenous people of Chiapas. 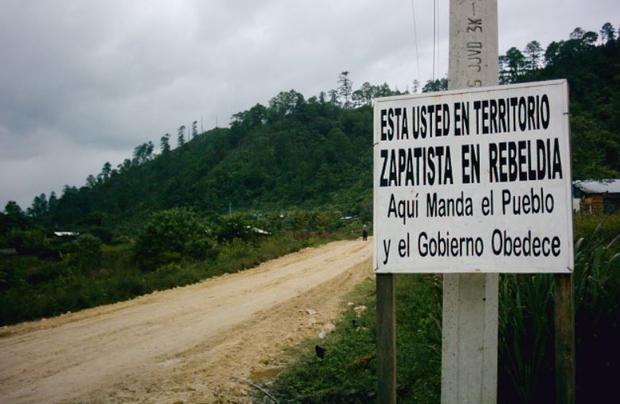 Sign indicating the entrance of Zapatista rebel territory. “You are in Zapatista territory in rebellion. Here the people command and the government obeys”.
Paolo Massa (CC BY-SA 2.0)
The 1,525 kilometers (950-mile) railway will link Palenque and the tourist resort of Cancún on the Caribbean coast, running through five south-eastern states. The route will be divided into three routes, with the four-year project expected to cost up to $7.4 billion.

The fact that the rail line will run through pristine virgin forests and jaguar habitat is of great concern to environmentalists. The Zapatistas’ are outraged over the project, even though a few indigenous groups defend it.

The plan is to connect tourist havens with less visited archaeological sites such as Palenque, which is in Chiapas, where the Zapatistas are based and control large amounts of territory.

This story is not over, by any means. The indigenous people of Chiapas are already suffering from human rights violations, in-fighting, and violence. So Lopez Obrador has his plate full as he begins to make economic and political changes in his country.