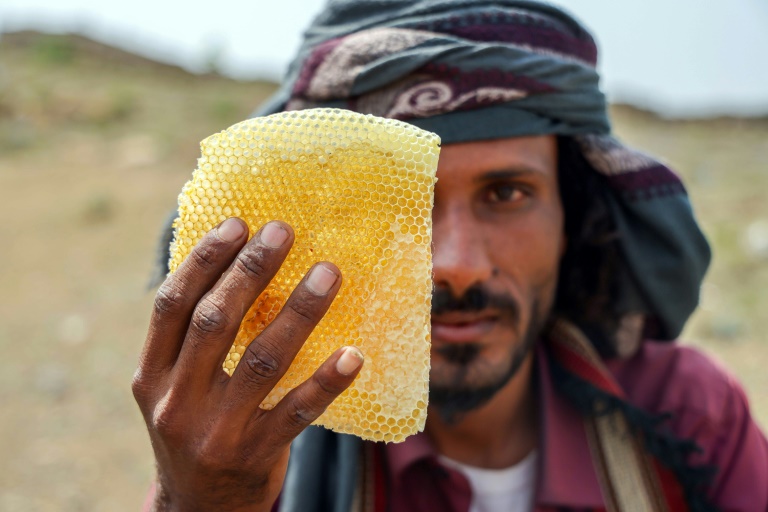 For Yemeni beekeeper Mohammed Saif, honey production used to be a lucrative business but years of war and climate change have taken the buzz out of the family hives.

The business, handed down from father to son, “is slowly disappearing”, Saif told AFP. “The bees are being hit by strange phenomenons. Is it due to climate change or the effects of war? We really don’t know.”

Yemen, one of the world’s most impoverished countries, has been gripped by a deadly conflict since 2014, pitting the Iran-backed Huthis against government forces supported by a Saudi-led military coalition.

Hundreds of thousands of people have been killed in fighting or through illness and malnutrition over the past eight years, and the country’s infrastructure has been devastated.

But a fragile UN-brokered truce has held since April, bringing some respite to the country and its war-weary population.

In the southwestern region of Taez, Saif recently took stock of his hives in a rugged valley surrounded by mountains.

Before the war, Saif said, the family managed 300 hives, now only 80 are left.

Experts consider Yemeni honey some of the best in the world, including the prized Royal Sidr known for its therapeutic properties.

The United Nations says honey plays a “vital role” in Yemen’s economy, with 100,000 households dependent on it for their livelihoods.

But “enormous losses have been inflicted on the industry since the outbreak of the conflict”, the International Committee of the Red Cross said in a report in June.

“Armed conflict and climate change are threatening the continuity of a 3,000-year-old practice,” the ICRC said.

“Successive waves of displacement to flee violence, the impact of weapon contamination on production areas, and the growing impact of climate change are pushing thousands of beekeepers into precarity, significantly reducing production.”

Saif knows it all too well.

“Last year in our village a missile struck a beekeeper’s hives. He lost everything,” he said.

“The war has had a very bad impact on us. The fighters have targeted many zones where bees are found,” he added.

The ICRC’s Bashir Omar said the conflict had limited the ability of beekeepers to freely roam the land whenever flowers were in bloom to collect the honey.

Landmines and active front lines are among the challenges they face.

“To make matters worse, Yemen, like many conflict-affected countries, is disproportionately affected by climate change,” the ICRC report noted.

“Temperature rises in recent years, combined with severe alterations caused to the environment, are disturbing the bees’ ecosystem which is impacting the pollination process,” it said.

“With water tables falling and increased desertification, areas previously engaged in agricultural activities and beekeeping no longer sustain these livelihoods.”

The ICRC is providing financial support and training this year to beekeepers, after a similar initiative in 2021 that helped nearly 4,000 of them.

“Before the war we could make a good living by selling honey… but honey has become rare and customers can no longer afford it,” he said.

In this article:Agriculture, Honey, Yemen