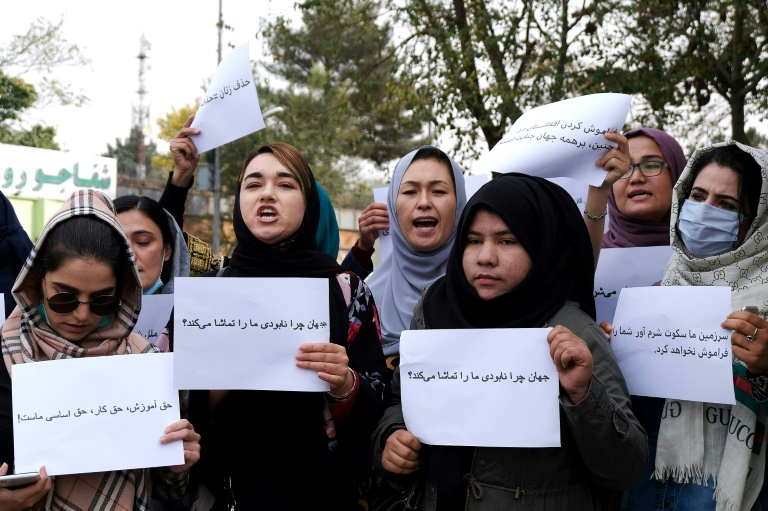 Women activists in Kabul held up signs that read “why is the world watching us die in silence?” on Tuesday, protesting the international community’s inaction on the crisis in Afghanistan.

Around a dozen women risked the wrath of the Taliban, who have banned demonstrations and shut them down using violence since taking power in August, holding banners affirming their “right to education” and “right to work”, before the Islamists stopped the press from approaching the march.

“We are asking the UN secretary-general to support our rights, to education, to work. We are deprived of everything today,” Wahida Amiri, one of the organisers for the Spontaneous Movement of Women Activists in Afghanistan, told AFP.

Their demonstration, addressing the “political, social and economic situation” in Afghanistan was initially planned to take place near the UN mission in Afghanistan (UNAMA).

But it was moved at the last minute to the entrance of the former “Green Zone”, where the buildings of several Western embassies are located, although most of their missions left the country as the Taliban took control.

Taliban gunmen at the entrance to the ultra-secure area initially asked the demonstrators and the press to move away.

An AFP reporter then saw a reinforcement of a dozen Taliban guards — most of them armed — push back journalists and confiscate the mobile phone of one local reporter who was filming the protest.

“We have nothing against the Taliban, we just want to demonstrate peacefully,” Amiri said.

Symbolic demonstrations by women have become a regular occurrence in Kabul in recent weeks as the Taliban have still not allowed them to return to work or permitted most girls to go to school.

Last Thursday about 20 women were allowed to march for more than 90 minutes, but several foreign and local journalists covering the rally were beaten by Taliban fighters.