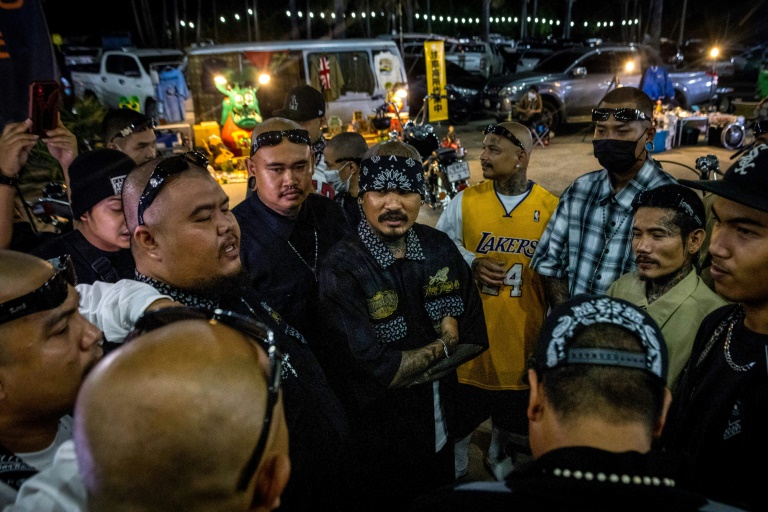 The crowd roars in the tightly packed room as the broad-shouldered, tattooed men stop pummelling a young recruit and smother him with hugs — completing his initiation into one of Thailand’s “Chicano” gangs.

For the tight-knit group of friends, the ritual embodies a concept of a Mexican-American Chicano culture increasingly embraced in Asia, with sounds, styles and swagger from the United States finding a home first in Japan, and now Thailand.

Dressed in baggy T-shirts and jeans, with bandanas and wraparound sunglasses only partially obscuring their intricate tattoos, Thais can now be seen on Bangkok’s sweaty streets celebrating a fusion of their own and Chicano culture each weekend.

But while the Chicano movement in the US began as a political and social force aimed at battling oppression, its Thai interpretation is focused more on its aesthetics.

“I just want to combine a Thai touch with the Chicano style to make this lifestyle simple and accessible,” explained gang leader Chalakorn “Leng” Arttanasiri, dismounting from his Harley Davidson.

Dragging on a smoke, the 40-year-old — who has images of the Virgin Mary, a Mayan goddess and much of “The Godfather” cast tattooed across his body — said his “Barbarian Has a Gun 13” group celebrates Chicano clothing and tattoos.

Its members say they are drawing on shared blue-collar values to create a blended “Thaino” culture, leaving their Chicano selves behind during the working week.

“On normal days, we dress like normal people,” Leng said, “but on the day of the gathering like this, we need to have options for our clothing so that we could look sharp and rock the same style as the others.”

A former drug-dealer, he grew up in a slum and served time but turned his life around running a business importing Chicano clothes, which prompted him to create a group to celebrate the culture.

But he has no time for the violence often associated with Chicanos by Hollywood — despite the tough initiation.

“It’s just a way to test their will,” he explained of the 13-second ordeal recruits endure to join his group.

“We can’t go around beating up other gangs to show our superiority,” he said. “We live in peace because we’re in a Buddhist-based city. We’re in Thailand.”

The 32-year-old was drawn to the scene’s low-slung, streamlined cars, collecting and customising the vehicles, and eventually building his own.

“Everybody has an honest career. Some of them may have tattoos all over their bodies but they’re all good people,” he added.

At a recent gathering, heavily tattooed men happily chatted as their children played in the background.

Among them was new recruit Chaiya Nob, who explained how gang “seniors” — only 13 of whom are permitted to have the group’s name dramatically emblazoned across their bellies — assessed him before he was allowed to join.

“Dressing like this doesn’t mean we have to act all macho, act like gangsters, and do illegal stuff,” the 31-year-old said.

“We have to do good and be respectable citizens. Our clothing choices may not be appropriate but our attitude is approachable,” he added with a grin.

Ultimately, the gang is about celebrating Chicano subculture together.

In this article:Chicano, Subculture, Thailand