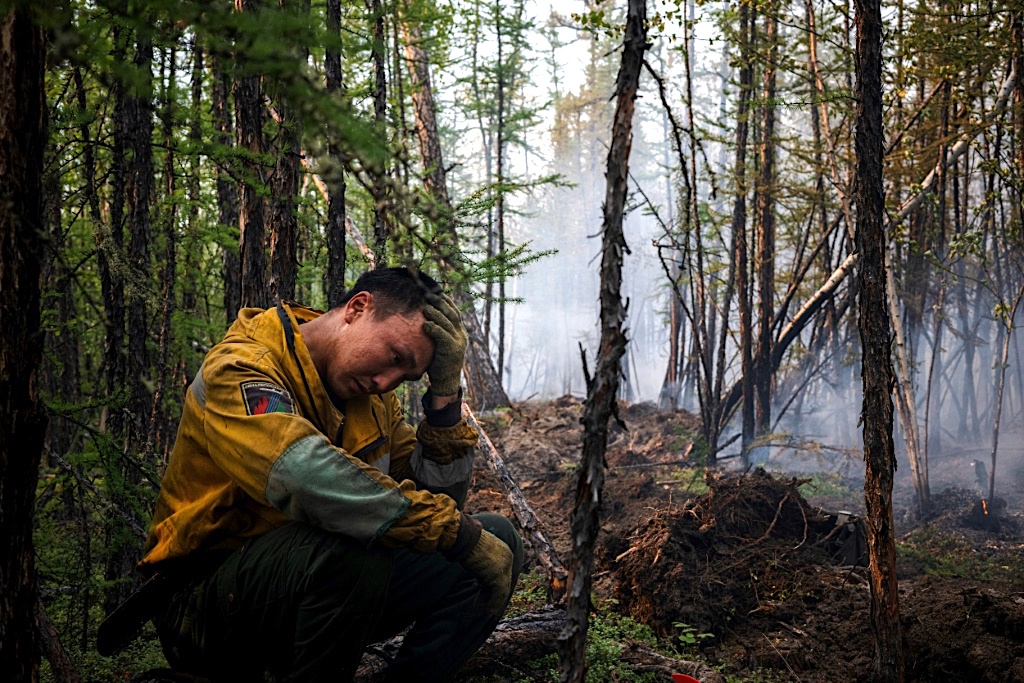 As thick clouds of smoke billow across the vast Siberian region of Yakutia, Yegor Zakharov and his team are racing to stop its smouldering forests from burning even more.

Members of Russia’s Aerial Forest Protection Service, his team spent a recent July evening patrolling a five-kilometre (three-mile) trench they had dug at the edge of the village of Byas-Kyuel to keep an approaching wildfire at bay.

Wearing respirators against the acrid smoke, the men lit strips of rubber tyre they hung from sticks, then tapped them onto the dry forest floor on the other side of the trench to start a controlled burn. 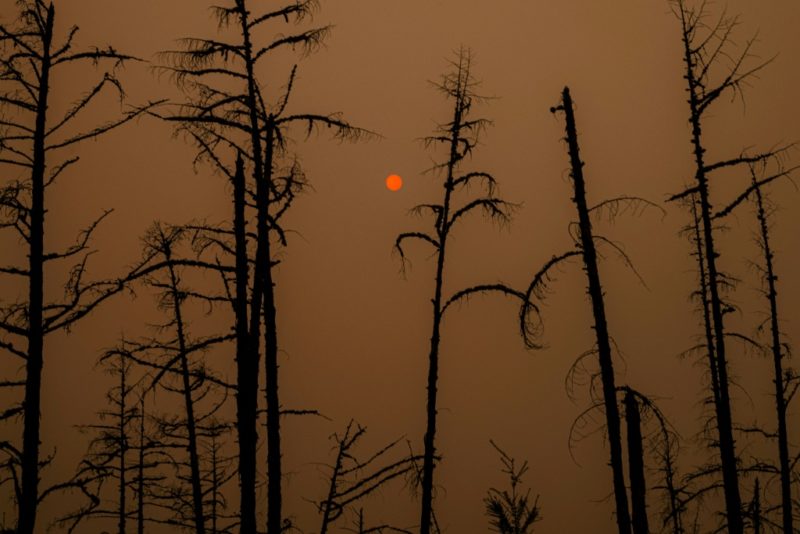 With more than a month still to go in Siberia’s annual fire season, more than 1.5 million hectares (3.7 million acres) of Yakutia’s swampy coniferous taiga has already been lost. — Photo: © AFP

The team has lost track of how many blazes they have tackled since late May — mostly successfully, sometimes not — as Yakutia suffers through yet another ever-worsening wildfire seasons.

“We held one property for eight days but it burned in the end because the tractors never got to us,” Zakharov said, explaining that in such cases they use shovels to dig trenches instead.

But even more than equipment, the 35-year-old brigade leader has another urgent plea: “We need more people.” 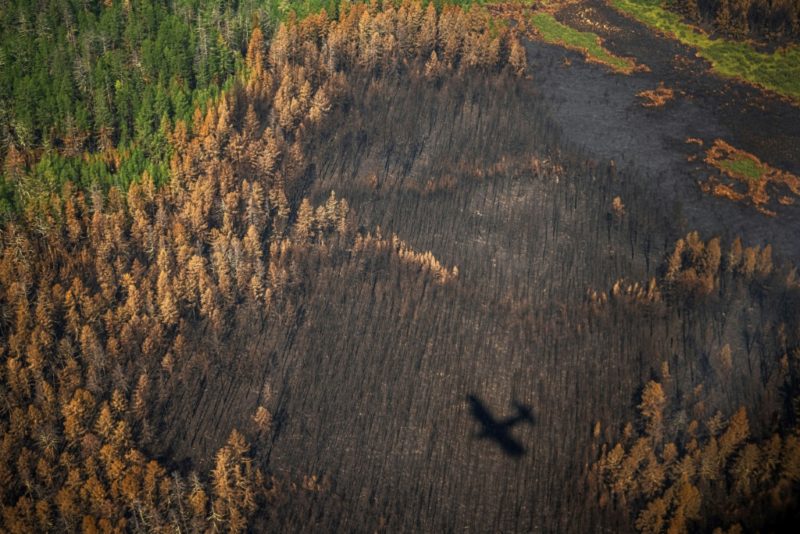 ‘If we weren’t around, everything would burn,’ says Yegor Zakharov, a brigade leader with Russia’s Aerial Forest Protection Service. — Photo: © AFP

Fuelled by summer heatwaves, wildfires have swept through more than 1.5 million hectares (3.7 million acres) of Yakutia’s zswampy coniferous taiga, with more than a month still to go in Siberia’s annual fire season.

Vast areas of Russia have been suffering from heatwaves and droughts driven by climate change in recent years, with numerous temperature records set.

It is the third straight year that Yakutia — Russia’s coldest region and bordering the Arctic Ocean — has seen wildfires so vicious that they have nearly overwhelmed the forest protection service.

The group of about 250 full-time staffers and 150 summer contract workers, who track the fires by air and drop in by parachute or on off-road trucks, is responsible for a region roughly five times the size of France.

Their goal, said Yakutia’s chief pilot observer Svyatoslav Kolesov, is to put out the fires entirely. But they also have to contend with blazes that overwhelm their manpower.

The number of firefighters in the region is far from adequate, Kolesov told AFP, recalling that when he started in 1988 the group had around 1,600 people before facing cuts over the years. 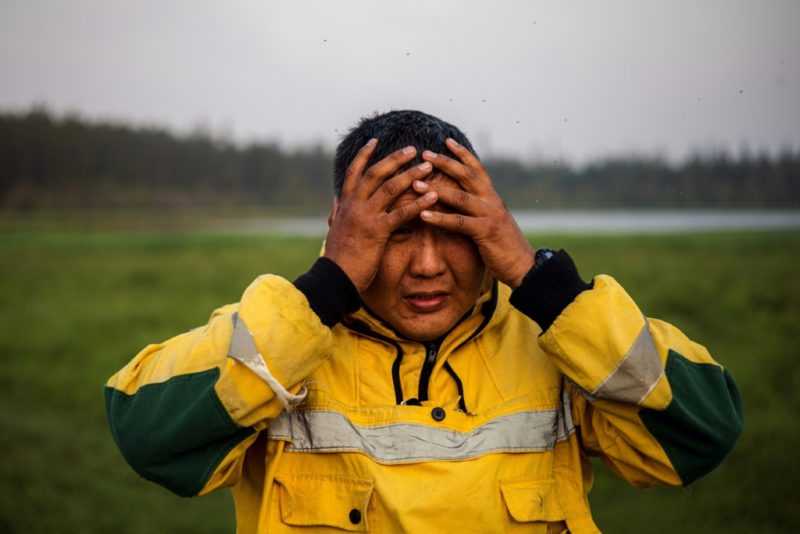 Kolesov, who monitors fires from daily flights and issues instructions to teams on the ground, said that because of limited resources the group will often keep an eye on a new blaze until it becomes sizeable. Only then will it send in a team.

“And if the fires spread quickly and soon cover a large area, then we try to save inhabited areas and strategic objects,” he said.

The country’s environment ministry is itself open about the policy, in 2015 issuing a decree that allows regions to ignore blazes if the cost of fighting fires outweighs the expected damages.

“We’ve said for years that Russia needs to increase its budget to fight wildfires by at least three times,” Grigory Kuksin, the head of Greenpeace’s wildfire unit in the country, told AFP.

In early July, Russia mobilised its defence and emergencies ministries to help Yakutia battle the wildfires, while dozens of volunteers also took up the fight. 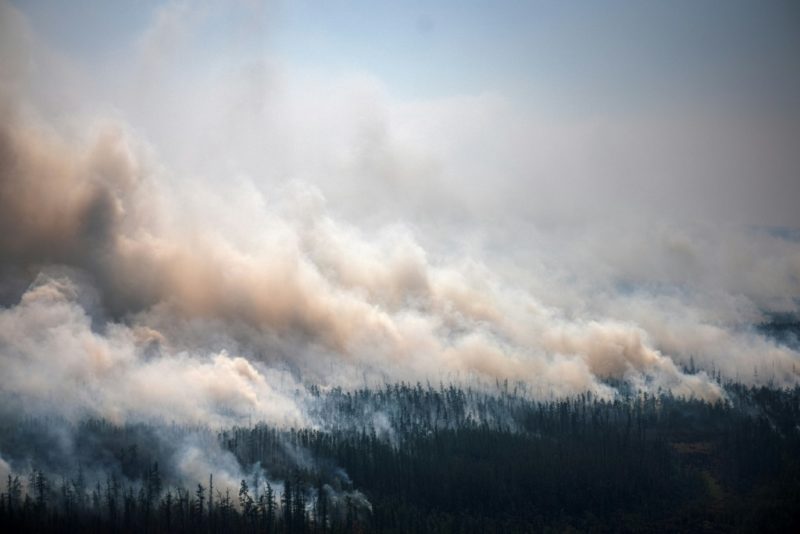 But the lack of funds for the Aerial Forest Protection Service — the only group wholly dedicated to fighting wildfires, according to Kolesov — are evident on the ground.

Brigade leader Zakharov said he asked officials repeatedly for a quad bike that never arrived so his men didn’t have to patrol their trench on foot.

“I lent most of my equipment to a team at a nearby fire,” he explained.

Later he received the all-terrain vehicle, but not before officials during a recent planning meeting disparaged the progress his team of five full-time staffers and eight summer contractors had made. 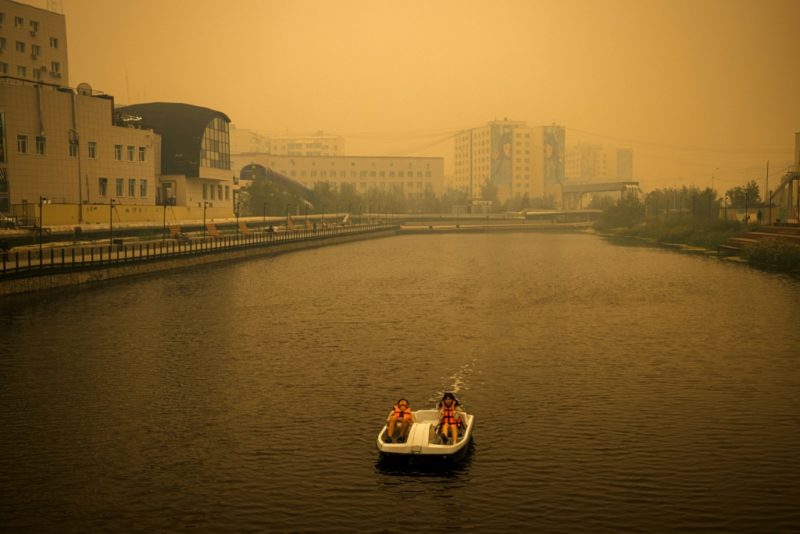 “What right do they have to criticise us?” Zakharov said, adding he had stormed out before the meeting had ended.

“Our guys have been working in the forest for a month straight. Anyone would start getting tired.”

The brigade leader and his men were planning to fight on nonetheless. After Byas-Kyuel, they planned to move straight on to the next fire without taking a break.

“If we weren’t around,” Zakharov said, “everything would burn.”

In this article:siberia wildfires, Wildfires, Yakutia