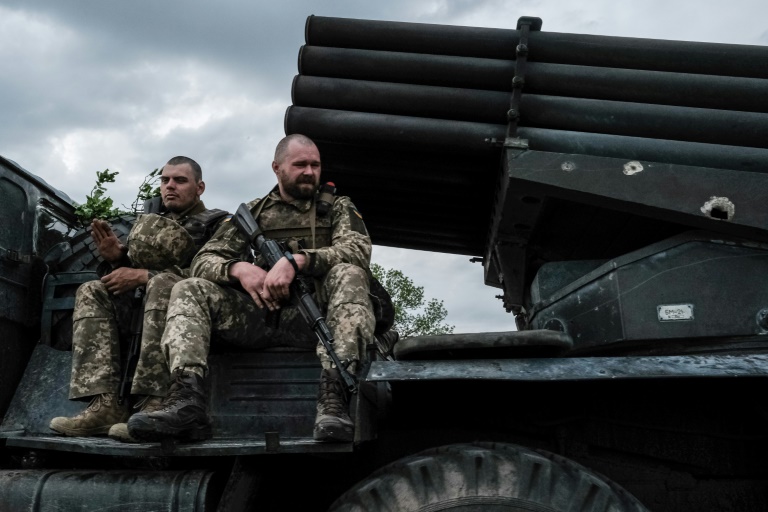 – Intense battles in the east –

Intense fighting rages in eastern Ukraine’s Donbas region, where Russia has been concentrating its forces without making significant progress.

“There’s heavy fighting on the border with Donetsk region, from the side of Popasna,” Gaidai says, reporting heavy losses of equipment and personnel by the Russians.

The war in Ukraine could reach a “breaking point” by August and end in defeat for Russia before the end of the year, Kyiv’s head of military intelligence tells the UK’s Sky News.

“The breaking point will be in the second part of August,” Major General Kyrylo Budanov tells the news network.

“Most of the active combat actions will have finished by the end of this year.”

The Group of Seven industrialised nations say they will never recognise the borders Russia is trying to shift in its war against Ukraine.

“We will never recognise borders Russia has attempted to change by military aggression, and will uphold our engagement in the support of the sovereignty and territorial integrity of Ukraine, including Crimea, and all states,” the G7 foreign ministers say in a statement after three days of talks in northern Germany.

The G7 leaders also vow to expand sanctions to include sectors on which Russia is dependent and they warn China against undermining punitive action against Moscow for its invasion of Ukraine.

“We reaffirm our determination to further increase economic and political pressure on Russia, continuing to act in unity,” their statement says, adding that the G7 “will broaden our sanctions measures to include sectors on which Russia has a particular dependence.”

“It is at zero at the moment, and that started from midnight as planned,” says Timo Kaukonen, manager for operational planning at Fingrid.

Russian supplier RAO Nordic had warned it would suspend supplies, citing problems with payments, as Helsinki prepares to announce its application for NATO membership.

Swedish Prime Minister Magdalena Andersson and Finnish President Sauli Niinisto speak to US President Joe Biden for just over half an hour, about their expected bids to join NATO, the White House says.

Niinisto says on Twitter he explained “Finland’s next steps” towards becoming part of the transatlantic defence group, and that his country “deeply appreciates all the necessary support from the US”.

But the two hitherto non-aligned countries face a potential hurdle from Turkey, whose President Recep Tayyip Erdogan says he does not have a “positive opinion” of them joining the alliance.

US Defense Secretary Lloyd Austin urges Russian Defence Minister Sergei Shoigu to move immediately to implement a ceasefire in Ukraine, in their first conversation since before the war began, the Pentagon says.

“Secretary Austin urged an immediate ceasefire in Ukraine and emphasised the importance of maintaining lines of communication,” the Pentagon says in a statement.

A senior US defence official dampened expectations that any progress was made. “The call itself didn’t specifically solve any acute issues or lead to a direct change in what the Russians are doing or what they are saying,” the official says.