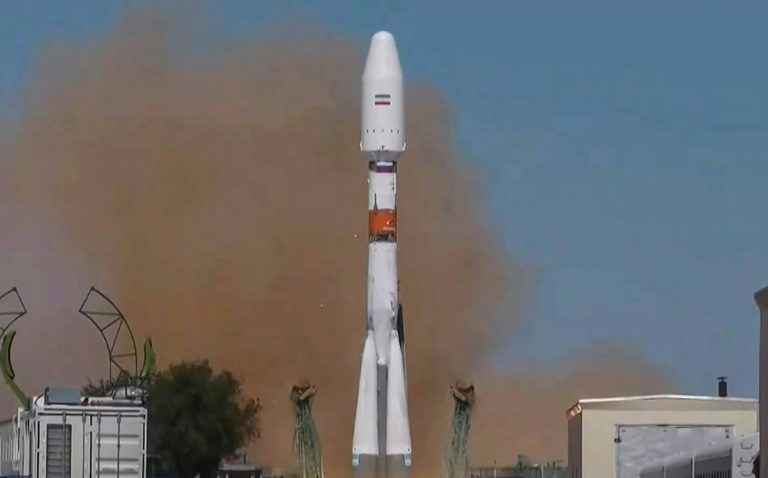 An Iranian satellite launched by Russia blasts off from Kazakhstan and reaches orbit amid suspicions that Moscow might use it to boost its surveillance of military targets in Ukraine.

Russia, increasingly isolated due to Western sanctions over its invasion of Ukraine, is seeking to find new clients for its embattled space programme in the Middle East, Asia and Africa.

Last week, The Washington Post quoted anonymous Western intelligence officials as saying that Russia “plans to use the satellite for several months or longer” to assist its war efforts before allowing Iran to take control.

The space agency of Iran, which has maintained ties with Moscow and refrained from criticism of the Ukraine invasion, stressed on Sunday that the Islamic republic would control the satellite “from day one” in an apparent reaction to the Post’s report.

The supply of Russian oil to three European countries through Ukraine has been halted as the transit payment cannot be processed due to sanctions, Russian firm Transneft says.

It says deliveries to Hungary, Slovakia and the Czech Republic have been affected and that the Ukrainian side stopped the oil transport “due to not receiving funds for these services”.

The EU has looked to reduce its dependence on Russian energy resources and has agreed to ban more than two-thirds of Russian oil imports.

Ammunition has detonated at an airfield in Moscow-annexed Crimea but there were no victims, the Russian defence ministry says.

“Several aviation munitions detonated” near the settlement of Novofyodorovka, it says in a statement carried by Russian news agencies. “As a result of the explosion no one was hurt.”

Two more cargo ships carrying grain have left Ukraine, Kyiv’s infrastructure ministry says, under a deal with Russia to ease agricultural exports from Ukrainian ports that had been blocked by the war.

It said that one of the ships, the Rahmi Yaggi, was bound for Turkey with 5,300 tons of products, while the Ocean Lion was carrying some 65,000 tons of corn to South Korea.

With the departures, a total of 12 ships have left three different Ukrainian Black Sea ports under the deal brokered in late July by the UN and Turkey.

Exports from Ukraine — one of the world’s biggest grain producers — had been halted by a Russian naval blockade and Ukrainian mining of the ports.