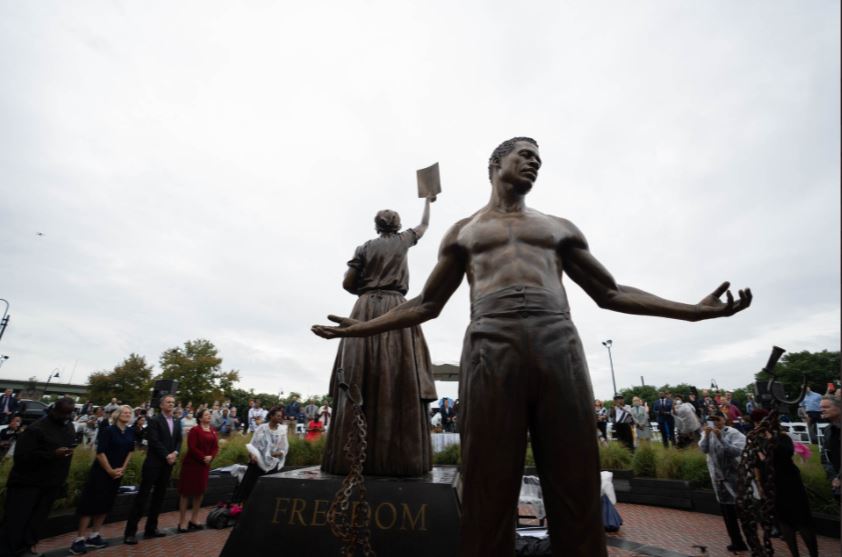 Two weeks after Richmond, Virginia, removed a statue of Confederate General Robert E. Lee that had prompted protests over racial injustice, the city unveiled a new monument on Wednesday commemorating the end of slavery.

The unveiling on Wednesday took place in heavy rain on Brown’s Island on the James River in downtown Richmond, starting with a ceremony performed by the Elegba Folklore Society. The monument is about 2 miles from where the Lee statue once stood, reports WTVR.com.

“Just a couple of weeks ago, one of my proudest days, we took down a statue of a man who led an army to stop the emancipation and freedom these figures symbolize,” Northam said at Wednesday’s ceremony.

“The enslaved built this city with their hands,” Richmond Mayor Levar Stoney said at the ceremony marking the occasion. “We will rebuild this city with our hearts.”

The Emancipation and Freedom Monument

This beautiful monument consists of two 12-foot bronze statues of a man and a woman holding an infant who have been newly freed from slavery. The woman is also holding a piece of paper with the date of January 1, 1863. That is the date President Abraham Lincoln issued the Emancipation Proclamation.

The man, who has scars visible on his back from being whipped can be seen breaking free from a set of shackles.

The statue’s pedestals include the names, images, and stories of 10 Virginians who contributed to the struggle for freedom before and after emancipation. The names were selected by the Virginia Dr. Martin Luther King Jr. Commission out of more than 100 nominations.

“It really captured what we were trying to do in that the figures capture the emotion of emancipation, but the people on the base capture who else was involved of the process of fighting against slavery, leading to emancipation, and fighting for freedom and equality going forward,” state Sen. Jennifer McClellan told NPR.

The monument is also making history of its own. According to McClellan, it’s the first state-funded statue celebrating emancipation in the U.S. She adds that Virginia becoming the state to first make it happen is significant in itself.

“I think it’s so appropriate that it’s here. … Virginia was the birthplace of Western democracy, but it was also the birthplace of slavery and all of the horrors that came with it,” she said. “Richmond has been at the heart of that.”

Virginians Listed on the pedestals

The Commonwealth of Virginia was built on the backs of both the indigenous people first encountered on these shores and the Black slaves brought over from the African continent in the 1600s.

By the start of the Civil War, slave labor was not only used for agriculture but was increasingly used in mining, shipbuilding, and other industries. In 1619, 20 Africans from what is today, Angola, were brought to Jamestown. This event was just the start.

Slavery proved to be very profitable in the southern colonies. Staple agriculture required a large workforce to clear land, plant/harvest crops, and pack/transport the tobacco to wharves on the river.

The less the farmworkers were paid, the greater the wealth accumulation for the landowners. By the year 1860, there were 550,000 enslaved people living in Virginia – constituting one-third of the state’s population.

But prior to emancipation, there were quite a number of Black Virginia slaves whose lives are now honored on the pedestals of the Emancipation and Freedom Monument. The five names include Mary Elizabeth Bowser, a spy for the Union in the Confederate White House, and Nat Turner, the leader of the only successful slave revolt in Virginia’s history, shattering the myth of the contented slave.

And five names were chosen to represent the time after Emancipation to 1970 here in Virginia. They include John Mercer Langston, Virginia’s first African American member of Congress and the first president of what is now Virginia State University.

Another name is John Mitchell, Jr., a community activist, the first African American to run for Governor of Virginia, and editor of the Richmond Planet newspaper, which covered local, national, and worldwide news, especially lynchings, segregation, and the rise of the Ku Klux Klan.