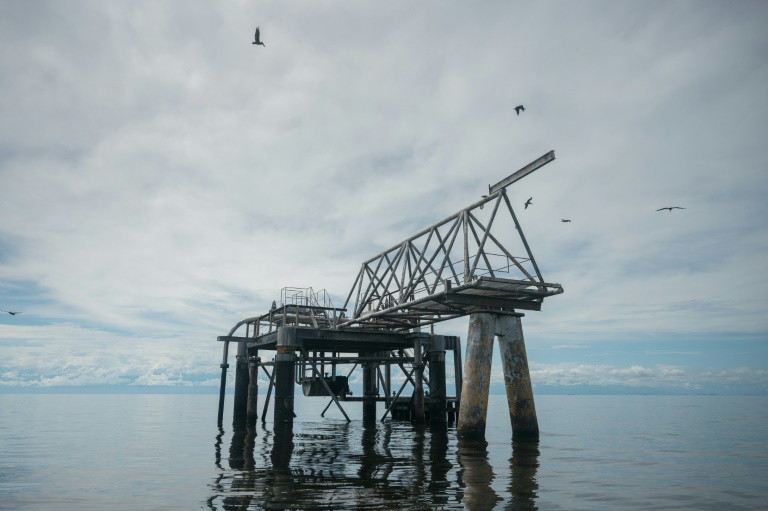 Leaks, rusted pipes, pieces of broken equipment scattered about and staircases leading nowhere: Lake Maracaibo’s oil field is a metaphor for Venezuela’s once-flourishing petroleum industry that is now on its knees.

More than a century ago, the Maracaibo basin in northwestern Zulia state was the birthplace of a business that transformed the country into one of the world’s 10 largest oil producers and a Latin American economic heavyweight.

Just 13 years later, it can only muster 500,000 to one million barrels per day amid a grinding economic crisis marked by years of recession and hyperinflation. Venezuela’s gross domestic product per capita is now similar to that of Haiti.

Despite sitting on the world’s largest proven oil reserves, the country battles fuel shortages and frequent blackouts, and at one point even had to import fuel from Iran.

The Maracaibo basin was once a flurry of oil activity, with a halo of light over the complex visible at night from a fair distance.

Today, it is a humid swamp that stinks of oil from leaking pipes floating on the water.

Hardly anyone risks going to that area “for fear of an explosion due to the gases,” one fisherman who asked not to be named told AFP.

The oil platforms have long been pillaged of any valuables, including taps and valves that control the flow of oil and gas.

It is a sea change from the prosperous 1970s when Venezuela’s oil industry was nationalized, giving state-run PDVSA a monopoly.

That lasted until the 1990s when the industry was opened to private capital.

But after Hugo Chavez came to power in 1999, he ordered all private oil companies to merge with PDVSA and made the state institution the majority shareholder.

From then on, the industry was hit by corruption, poor decision-making, problems with maintenance and aging equipment, and later financial sanctions.

PDVSA did not immediately respond to requests from AFP for comment for this story.

Many analysts believe the key moment in the industry’s decline came in the early 2000s when Chavez, who died in 2013 while still president, became embroiled in an protracted battle with PDVSA executives.

The clash resulted in a crippling strike from December 2002 to March 2003, during which production dropped to a historic low of just 25,000 barrels a day.

Blasting the “sabotage” of Venezuela’s oil production, Chavez sacked most of PDVSA’s management and thousands of employees, replacing them with people “loyal to the revolution” who often lacked the necessary expertise.

Production rebounded after the strike, but by 2009, 70 businesses involved in the supply chain were also nationalized.

This resulted in “a lack of maintenance, and a lack of motivation among employees,” whose salaries plummeted, said one former employee identified here as Carlos (his name has been changed to protect his anonymity).

But when the onetime “cash cow” for Venezuela’s government encountered hard times, so did its employees.

“Many women left their husbands because they no longer worked for PDVSA. Families broke up. I didn’t earn enough any more,” said Carlos, who blamed his own divorce on a loss of income.

By that time, half of the country’s oil wells were paralyzed.

In 2013, the crisis deepened when subcontractors stopped working due to unpaid bills.

Idle employees began spending their days “fishing to feed themselves” as provisions never reached workers on the platforms, recounted Maria, who worked for the company at the time and still does (her name has been changed for this story).

The politicization at PDVSA had reached a high point: even computer screensavers at the company used pictures of Chavez, and later, his successor Nicolas Maduro.

“Hiring people based on their politics badly affected production… we got rid of experienced people, and any semblance of meritocracy disappeared,” said Maria, who asked that AFP not explain the job she performs for PDVSA.

It also created a “breeding ground for corruption,” with embezzlement at the highest level, she added.

“They seize public resources and illegally seek to legalize the capital,” Attorney General Tarek William Saab said at the time.

Ramirez, now in self-exile in Italy, said the accusations against him are politically driven.

Several witnesses with direct knowledge of the situation, including Maria, said PDVSA vehicles were put to private use, company funds were used for personal purchases — and even televisions and computers were stolen.

But that was nothing new.

“There’s old corruption and new corruption,” said Carlos Mendoza Pottella, a professor of oil economics at the Central University of Venezuela in Caracas, adding that irregular purchases and illicit practices were already happening in the 1980s.

With PDVSA in solid decline, some employees jumped ship and found jobs as taxi drivers or in supermarkets, while engineers and geologists fled abroad in search of opportunities.

Maria stayed, however, and works twice a week for a meager 60 bolivars (less than $15) per month and no benefits. Before, she had a good salary and medical coverage.

“No oil employee can live off their PDVSA wage,” said Maria, except for those employed by “mixed companies” — joint ventures with Chinese or Russian firms.

Venezuela blames US sanctions for its difficulties, but those punitive measures only began in 2014 — long after the rot had set in.

By the time Donald Trump intensified sanctions against Venezuela when he took office in 2017, the country’s oil industry was already on its knees, though they have certainly made things even more difficult.

Once Venezuela’s main crude oil client, the United States today hinders even the importation of spare parts needed by refineries, as it moves to eviscerate Maduro’s government, which it no longer recognizes.

Roy, a 30-year-old fisherman who only gave his first name, remembers how impressed he was by the complex on Lake Maracaibo.

Now, the abandoned installation does little but pollute the water, with crude occasionally spewing out of the dilapidated platforms.

“One day, I saw oil spraying 70 meters into the air. I thought it was water but it was oil,” said Roy.

Some areas of Lake Maracaibo are known as “dead zones” because oil slicks, visible on NASA satellite images, have deprived them of oxygen.

Local residents are bearing the brunt of the environmental disaster.

“The oil slicks prevent you from working,” said Roy, who added he once lost 100 kilograms (220 pounds) of crabs ruined by crude.

The lake’s floor is criss-crossed by “a mishmash of pipes and pipelines releasing oil that is killing biodiversity,” said Mendoza Pottella.

But it’s not the only problematic site. Leaks are common wherever Venezuela drills for oil, although PDVSA rarely acknowledges them.

In Venezuela’s eastern oil zones, near the town of Maturin, residents say cracked pipelines pass through farms and private property.

“There is a continuous leak,” complained Eleazar Gonzalez, who grows bananas and papayas in the village of Los Pozos de Guannipa. “It pollutes everything.”

This week, three people were injured in an oil pipeline explosion to the east of Lake Maracaibo in Naricual, not far from Maturin.

Despite the chronic problems, Maduro nevertheless claimed earlier this month that production had climbed back up to one million barrels a day and said the aim was to double the figure in 2022.

Over the past year, there was a “small uptick” in activity, and PDVSA has started to pay its subcontractors, a businessman with decades of experience in the sector told AFP on condition of anonymity.

In an era where the world is seeking to move away from fossil fuels, Maduro has vowed to break the economically crippled country’s reliance on so-called “black gold.”

“We are not going to depend anymore on oil,” he said, calling for more economic diversification.