Devastatingly heavy rains, along with horrific flooding have laid waste to regional “food baskets” around the world lately, and now Europe is feeling the pinch, not only in the pocketbook but at the kitchen table, as countries in the Mediterranean region, Europe’s fruit and vegetable patch, begin recovery from a “perfect storm” of weather events.

According to CTV News, the vast fields of coastal Spain’s Mediterranean region usually stay warm year-round, with the region providing about 30 percent of Europe’s fruits and vegetables in supermarkets, while in the winter months, the figure jumps to 50 percent. And generally, during the winter months, the Murcia region in southeast Spain supplies up to 80 percent of Europe’s produce. 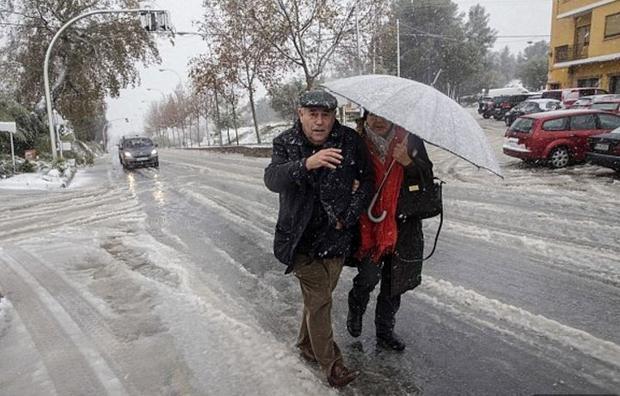 The shortage has been caused by floods, snow and storms across Spain. Pictured: A couple walk through the snow in Murcia, eastern Spain.
EPA

A “perfect storm” of snow, ice and heavy rains
Yes, the weather has played havoc in Europe this winter, creating a food shortage that is probably felt the worst in Britain, which imports over 25 percent of its produce from Spain. And the farming disaster started in late December when torrential rains hit the region, destroying half the lettuce in Murcia.

Then came the freezing weather and the first snow Murcia had seen since the 1980s. And in Spain and Italy, a hard freeze, along with an extreme frost set in, wreaking further havoc on crops. Fields were left under water, frozen and after thawing, mud-filled, preventing farmers from cleaning up and replanting. In Italy, for the first time in years, instead of exporting vegetables, the country had to import produce.

The food shortages are expected to last through April this year, and this situation really matters to consumers, according to data collected by the International Trade Center. But they point out that it’s not just Spain’s weather events that are worrisome. Actually, weather events have impacted a wide range of vegetables from the continent – including aubergines and tomatoes – while a shortage of courgettes first hit British supermarkets in mid-January. 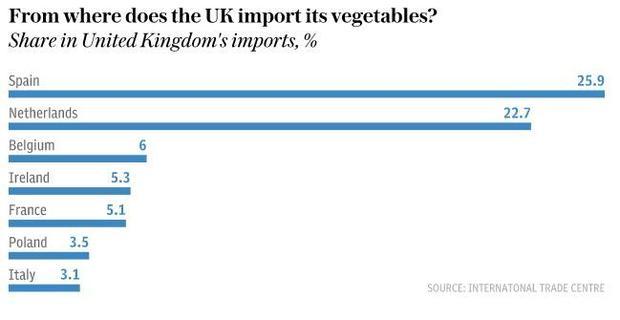 A need for a focus on environmental issues
The Scotsman cited the public’s fixation on Brexit and Donald Trump’s “volatile administration” as being the reason the environmental impacts responsible for the current food shortages in Europe have been shoved to the bottom of the “discussion pile.”

They believe the three stories are intertwined somehow, along with the decline of bluebells, one of the country’s most iconic woodland plants. But this writer believes what they are trying to get across is basically this – Worldwide issues, like Brexit and Trump, take us away from the more fundamental problems that need to be kept at the forefront, and one of the world’s greatest threats is food shortages caused by anthropogenic climate change.

The Scotsman adds: “It will require a concerted international effort to lessen the impact of such trends, an already considerable task before you take into account the challenge represented by Mr. Trump.” And as everybody now knows, Trump thinks the climate change issue is nothing more than a hoax.