The proposed 1,700-mile Keystone XL pipeline would transport up to 35 million gallons of oil every day from Canada’s tar sands -one of the dirtiest energy sources in the world — to refineries in Texas. Much of it then would be exported to other countries.

In March 2019, the U.S. Court of Appeals for the 9th Circuit denied yet another attempt by TransCanada to begin construction on its proposed Keystone XL pipeline, upholding a Montana judge’s ruling barring construction of the Keystone XL oil pipeline from Canada.

Then, on July 29, 2019, the order issued by a Montana judge barring certain pre-construction activities was dissolved after a June ruling from the U.S. Court of Appeals for the Ninth Circuit that a new presidential permit negated challenges to the project’s earlier approval. 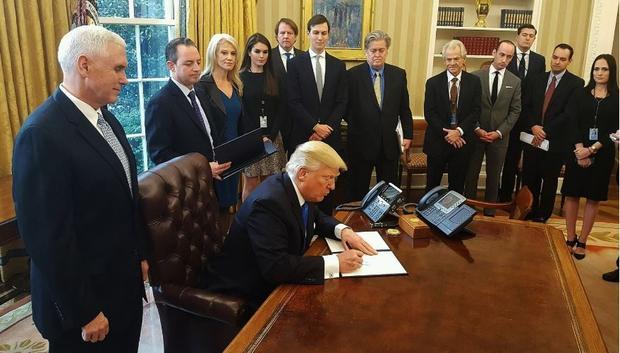 Donald Trump signs orders to green-light the Keystone XL and Dakota Access pipelines on January 24, 2017.
Office of the President of the United States

The lawsuit the Trump Administration wants to be dismissed was brought by tribes in Montana and South Dakota who say that President Donald Trump approved the pipeline in March without considering the potential for damage to cultural sites from spills and construction.

The Assiniboine and Gros Ventre tribes of the Fort Belknap Indian Reservation and South Dakota’s Rosebud Sioux tribe say Trump’s action violated their rights under treaties from the mid-1800s.

The Trump administration’s lawyers are arguing that Trump’s presidential permit applies only to a 1-mile section of pipeline along the U.S.-Canada border in northern Montana. The pipeline has been subject to years of delay because of fierce environmental and landowner opposition.

The hearing will be held this Thursday on the government’s attempt to get the lawsuit dismissed. U.S. District Judge Brian Morris will be presiding.